Demonstrators took to the streets of a St. Louis suburb Monday to protest the fatal shooting Saturday of an unarmed black teenager by police, as officials appealed for calm after a night of riots and the FBI said it would investigate the incident.

“Ferguson police show us no respect,” Chanel Ruffin, 25, said during the protest. “They harass black people all the time.”

“This is a terrible tragedy,” Ferguson, Mo., police chief Tom Jackson said Monday on CNN as protesters marched. “Nobody wanted this to happen but what we want to do is we want to heal. We want to build trust with the community and part of that is to have a transparent, open investigation, conducted by outside party.”

The protests Monday remained mostly peaceful, in contrast to the looting that took place Sunday night. A spokesman for the family of the teenager, Michael Brown, told media outlets his family wants “justice.” A list of demands being circulated among protestors Monday was much broader, calling for, among other things, a more diverse police force and that the officer who shot Brown be identified, fired and charged with murder. In a sign of the growing national attention focused on the small town, the hacking group Anonymous hacked Ferguson’s website on Sunday night.

Jackson said he understood the concerns of demonstrators and that a full, independent probe would help the community move forward. The FBI informed Jackson on Monday that it will investigate, the Associated Press reports. Missouri Gov. Jay Nixon, among other officials, had called for such an investigation.

“It is vital that the facts about this case are gathered in a thorough, transparent and impartial manner, in which the public has complete confidence,” Nixon said.

Attorney General Eric Holder also released a statement saying the FBI and the Justice Department’s Civil Rights Division will work in conjunction with local officers to conduct a thorough investigation.

“The federal investigation will supplement, rather than supplant, the inquiry by local authorities,” Holder said in a statement. “At every step, we will work with the local investigators, who should be prepared to complete a thorough, fair investigation in their own right. “

It remains unclear—and a matter of hot dispute—what led to the shooting Saturday of Brown, 18. Police say the teenager had assaulted an officer and reached for his gun. Many in community are skeptical of that account.

In downtown historic Ferguson on Monday morning, hundreds of protestors gathered around the Ferguson Police Department demanding justice for Brown, who they called a “gentle giant.” With raised hands in the air, people shouted “Don’t shoot me.”

Some protesters were peaceful. Others got in police officers’ faces, screaming obscenities and crossing police lines. Officers shouted “cuff him” while arresting at least a half-dozen protesters. Most protesters dispersed after a couple hours.

As news of the protests spread via social media, people of all races came from the region—one more than 60 miles—for a second, impromptu anti-police protest, this time in front of a burnt and looted convenience store. Protesters said they heard about the earlier demonstrations and drove to Ferguson to support to Brown’s family and the community.

Police in riot gear stayed mostly quiet as protesters shouted “no justice, no peace” and drivers honked in support. Police were not addressing the crowds.

The shooting has come at a time of heightened scrutiny across the country over police tactics and racial disparities in the criminal justice system. But Jackson resisted comparisons to other cases.

“This case, I know it seems like it’s similar to others, but what I would really hope is that we could allow the investigation to play out,” said Jackson, who, in an indicator of how hot tensions are running, reported being shot at himself Sunday night in a local Walmart parking lot.

The riots Sunday night in Ferguson left a trail of destruction, with cars vandalized, stores looted and walls spray-painted. More than 30 rioters were arrested, and police said two of their officers were injured.

“People were acting out of emotions,” Ruffin said. “There are a lot of people hurting. I’m not saying what they did was right. … We want justice.”

Police were on hand Monday to keep order.

“We can’t have another night like last night,” Jackson said on CNN. “So we hope it doesn’t happen, but we’re prepared for the worst.

About 130 police formed a line, in riot gear, as protesters chanted “we’re not stupid. We ‘re not stupid.” Protesters formed their own line with their hands up, crying out things like “don’t shoot me” and “you got to stop killing our people.” Brice Johnson, 27, held up a sign that read: “Please do not shoot. My hands are up. RIP Mike Brown.”

Police arrested at least half-a-dozen people who did not disperse.

“This is a terrible tragedy,” Jackson, the police chief, said of the shooting. “Nobody wanted this to happen, but what we want to do is we want to heal, we want to build trust with the community. And part of that is to have a transparent, open investigation, conducted by outside party.” 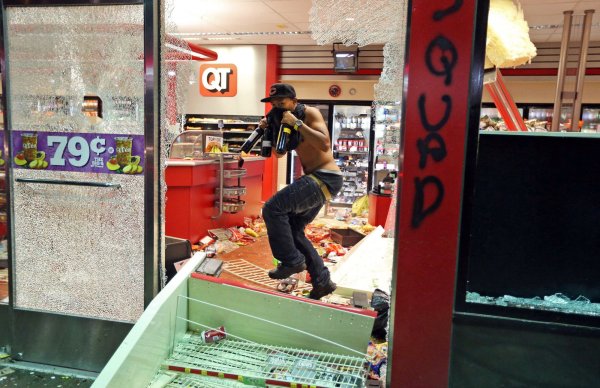 See Pictures of Looting and Violence in Ferguson
Next Up: Editor's Pick