This Is What Pot Does to the Teenage Brain

A participant smokes a marijuana joint while marching in the annual Hemp Parade (Hanfparade) on August 9, 2014 in Berlin, Germany.
Sean Gallup—Getty Images
By Justin Worland

The number of teenagers who smoke marijuana is on the upswing, and those who do smoke pot may face a decline in brain functioning, psychologists told attendees at the American Psychological Association’s annual convention last week.

“It needs to be emphasized that regular cannabis use, which we consider once a week, is not safe and may result in addiction and neurocognitive damage, especially in youth,” said Krista Lisdahl, an assistant professor at the University of Wisconsin-Milwaukee, in a press release.

Lisdhal’s presentation acknowledged that experts don’t agree on whether pot harms adults, but, she said, all evidence suggests that frequent marijuana consumption harms young people, whose brain development may be altered by the substance. Addiction, car accidents, chronic bronchitis, and decreased life achievement are the most likely among the potential consequences of teenage marijuana consumption, according to a presentation by Alan Budney, a professor at Dartmouth College.

The conclusions come in light of recent data that suggests more and more teenagers are using the drug. A recent study found that 6.5 percent of high school seniors smoke the drug on a daily basis, compared with 2.4 percent in 1993, according to Lisdhal’s presentation. Lisdhal, who is also the director of a brain imaging and neuropsychology lab, said nearly a third of young people reported smoking at least once over a month-long period.

The conference presentations drew their conclusions from surveys of other findings in the field. And, while Lisdhal said there’s “controversy in the adult literature,” the presentations suggested that there’s pretty clear evidence that marijuana consumption harms young people. 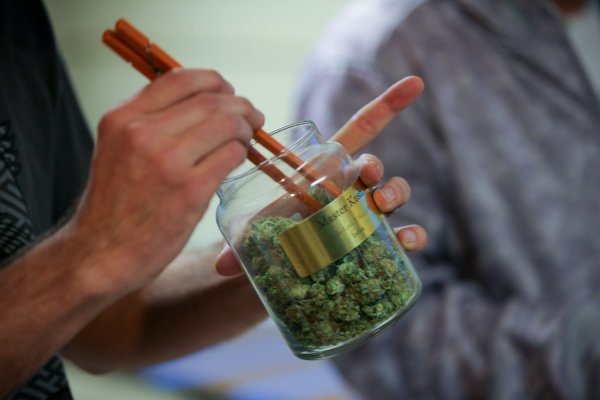 Colorado Hits a New High for Pot Sales
Next Up: Editor's Pick