Iraq’s Prime Minister Nouri al-Maliki is resisting mounting pressure for his resignation, and has threatened to take legal action against the country’s President Fouad Massoum for failing to back his bid for a third term in office. The political discord comes as a humanitarian crisis continues to unfold in the country’s north, where tens of thousands of refugees are fleeing attacks being carried out by Sunni extremists.

Late on Sunday, Maliki accused Massoum of mounting “a coup on the constitution and the political process in a country that is governed by a democratic and federal system.”

Maliki says he is entitled to a third term because his coalition won in polls held in April. However, he has not earned support from the legislature.

“Getting the confidence of Parliament is key,” Lina Khatib, the director of the Carnegie Middle East Center, tells TIME. “Maliki did not get that as a result of his mishandling of the current crisis in Iraq as well as his divisive policies over the two terms he has served as Prime Minister.”

The U.S., which has begun targeting militants in northern Iraq in limited airstrikes, urged caution. “The government formation process is critical in terms of sustaining stability and calm in Iraq, and our hope is that Mr. Maliki will not stir those waters,” Kerry told reporters in Sydney on Monday.

The embattled Shi’ite premier has been accused of stoking sectarian fighting by marginalizing Sunni rivals in the government and military in order to consolidate his grip on power since the withdrawal of U.S. troops from Iraq in 2011.

“It seems that Maliki’s priorities have been centered on trying to secure a third term for himself as Prime Minister rather than security of Iraq,” says Khatib. “His leadership performance has been abysmal.”

The New York Times reported early on Monday that the Prime Minister ordered tanks and an unspecified number of additional commandos to take up key positions within the capital’s heavily fortified Green Zone on Sunday, spurring fears of confrontation with his political opponents.

Meanwhile, further north in Iraq’s Kurdish region, aid agencies continued to scramble to help the wave of refugees that was unleashed nine days ago, when forces loyal to the Islamic State of Iraq and Greater Syria (ISIS) launched a savage military offensive in the region, aimed at removing religious minorities from the large swath of territory between Mosul and the Tigris River to the west.

The U.N. Refugee Agency reports at least 30,000 people have managed to escape from the mountains near Sinjar after being trapped there without water or supplies by ISIS forces. However, humanitarian groups on the ground said the situation in the region is still critical.

“Its imperative that we do everything in our power to ensure these people receive the life-saving assistance they need,” said David Swanson, an official with the United Nations Office for the Coordination of Humanitarian Affairs. 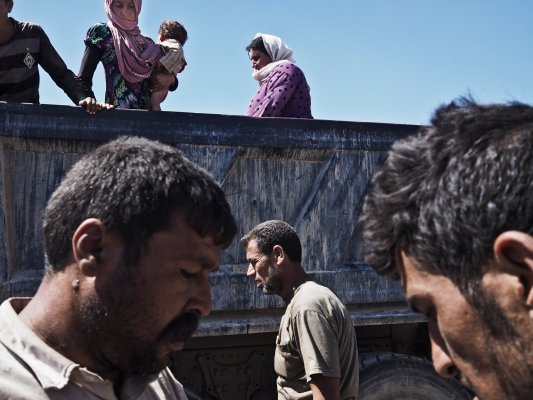