As Scott Walker Falls, His Democratic Challenger Continues to Rise

There are few Republicans who Democrats hate more than Scott Walker. Two years ago, Democratic groups spent $20 million trying to recall the Wisconsin governor, unsuccessfully. He has since raised a staggering $19 million and seems untouchable. So how is Walker is in the race of his life against Democrat Mary Burke?

After winning a close election in 2011, Walker drew the ire of unions and Democratic groups after he passed Act 10, which took collective bargaining away from government workers. His 2012 recall made him the champion of fiscal conservatives and free market right wingers. So much so that a year ago, when Walker made a trip to Iowa, he ignited a storm of 2016 presidential speculation. For awhile, Walker looked poised to sail through reelection and on to bigger and brighter things.

Then federal prosecutors announced in June that Walker, his chief of staff and others around him participated in a “criminal scheme” to illegally coordinate with outside groups during his campaign and recall. That case fizzled and a special prosecutor announced that Walker was not the target of an investigation and that there was not yet sufficient evidence to charge anyone with a crime. Walker dodged a bullet, but it was only the beginning of what has become a tough summer for him.

Walker’s approval rating has slid down below 50%, and his disapproval rating has crawled up to 48%. His stated second term agenda has underwhelmed pundits, who accused him of coasting. And Wisconsin’s job situation, while improved, is still struggling. Walker’s job creation record hasn’t lived up to his hype and his new created Economic Development Corporation has been mired with problems. Enter Mary Burke. “She’s running a very disciplined campaign essentially saying: I’m not Scott Walker,” says Mordecai Lee, a University of Wisconsin Milwaukee political science professor. “She has really positioned herself as a no name moderate Democrat—fiscally conserve but socially liberal.”

Run Walker against a frothing crowd of angry unionists and he clearly wins. But run him against a faceless, generic Democrat and he loses: a distinction not lost on Democrats. Burke, who is the former executive at Trek Bicycle and a member of the Madison school board, has a virtually non-existent voting record. She speaks calmly and promotes her pragmatism, underlining her opposition to President Obama’s policies nearly as much as Walker’s. In other words, she’s done her best to make this race about Walker, not about her.

Walker’s problem is that everyone in Wisconsin knows who he is—for better or for worse—whereas 40% of voters in the latest Marquette poll, the gold standard of Wisconsin surveys, say they’ve never heard of Burke and have no opinion of her. That’s down from 70% when she first entered the race, but the more they know about her, the more they swing to her. Since April, Walker and Burke have been tied in polls, despite heavy spending on the by Walker and his allies on the right attacking her.

Walker’s team, recognizing that he was in trouble, went on the attack over the summer. They pilloried Burke as “Millionaire Mary,” and lately have been portraying her as a trust fund baby, highlighting two sabbaticals she took from the company her father started to travel. They’ve also gone on the offensive against Trek, accusing the company of outsourcing. It’s a fair criticism, only 10,000 of Trek’s bikes are made in the U.S., most of them are made in Asia and Germany. But the problem with these populist attacks is that they alienate Walker’s biggest fan base: Republicans who celebrate earned wealth and free marketers who believe outsourcing is actually good for the economy.

The strategy has drawn criticism from the Wall Street Journal, who accused Walker of “channelling Team Obama” in his ads. “Economic populism is usually the province of Democrats who don’t understand how free markets work or who cynically hope to exploit voters’ insecurities,” the Journal wrote. “Mr. Walker is better than that.”

Mike Nichols, of the conservative Wisconsin Public Research Institute, called on Walker to stop using the term “outsourcing,“ as “an outmoded, antiquated term that puts a confusing and negative wrapper around what is often a necessary and admirable practice.” And conservative bloggers and Walker’s ally, Sen. Ron Johnson, a Wisconsin Republican, have said he’d be better off focusing his fire on Burke’s plethora of other bad economic ideas.

The scandal surrounding his Economic Development Corporation hasn’t helped. The group gave money to companies to help keep jobs in Wisconsin. Only, it turned out, two of those companies then went ahead and outsourced jobs. Worse, both those companies’ chief executives turned out to be campaign contributors to Walker. All of which has combined to undercut Walker’s most powerful argument against Burke.

Burke, meanwhile, has come out swinging herself, accusing Walker of failing to live up to his first-term promise to create 250,000 jobs. Walker has created 100,000 jobs. He notes that under his predecessor, Democrat Jim Doyle, for whom Burke served as Secretary of Commerce, Wisconsin lost 133,000 jobs, “so you see a shift of about 230-some-thousand jobs,” Walker told the Huffington Post. That math is clearly fuzzy. Walker has since shifted gears and claims he created 17,000 new businesses, a number fact checkers have since disputed.

Burke is experiencing a boomlet. The race has finally broken through on the national level and she’s hoping to attract more money, though she’s raised an impressive $6 million already, and more high-profile surrogates. “At the moment, Burke has an important quality: the potential to defeat Walker,” says Barry Burden, a political science professor at the University of Wisconsin Madison. “Although some liberals expressed hesitation about her candidacy early on, they are now almost uniformly behind her rather than letting the perfect be the enemy of the good.”

Still, Walker clearly retains the advantage here. It’s hard to unseat an incumbent. Midterm election turnout favors Republicans. And with the President’s polling numbers in the toilet, Democrats have struggled on nonexistent coattails. Walker is also an experienced pol who has demonstrated he can pull out close races. One thing Burke has successfully done? Put on life-support talk of Walker in 2016. After all, if you’re unpopular at home, it doesn’t make for a great case nationwide. 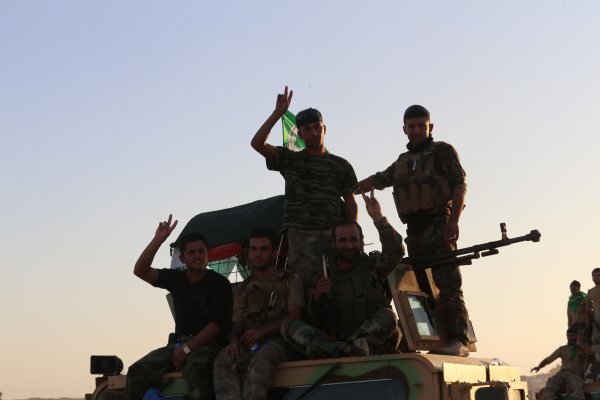 U.S. No Longer Waging a Time-Share War
Next Up: Editor's Pick