Our Bodies, Our Selfies: The Feminist Photo Revolution

Illustration by Anna Sudit for TIME
By Jessica Bennett

As far as selfies go, the photo of 17-year-old Grammy winner Lorde was a coup. “In bed in paris with my acne cream on,” the singer wrote on Instagram, captioning herself in a black T-shirt and messy bun, white splotches visible on her face.

The scene was utterly ordinary — the way most teen girls go to bed each night — which was precisely what made it so out of the ordinary. How often do you see a celebrity looking like a regular awkward teen? (Answer: almost never.)

Over the past year, the selfie has pushed its way into our collective consciousness like a pop song you can’t get out of your head. It was Oxford Dictionary’s word of the year. It has spawned think pieces about think pieces. It will earn you nine points in Scrabble.

But the Lorde acne-cream selfie is just a tiny example of the ways young women like her — and even, yes, some socially conscious celebs — are using the self-portrait to turn that narcissism notion on its head. In small pockets all over the Internet, women are celebrating their flaws. They’re making silly faces (ugly selfies!) and experimenting with identities. They’re owning their imperfections (whether it be full hair or wrinkles or — dare we say it — fat) and contradicting old stereotypes (for instance, that “#FeministsAreUgly,” as a new Twitter campaign has it). In a culture that places immeasurable value on a woman’s beauty, women are using selfies to show what women really look like — no makeup, acne cream and all.

I’ve spent a good portion of the last year looking at the ways that imagery can impact our perception of women, and how we can overturn sexist tropes through mass media. But the selfie is doing the same thing through mass culture. Here are nine ways the selfie is empowering women.

Selfies Push Back Against Traditional Beauty Norms
Self-portraits have been an outlet for feminist expression, and subversion, for a long time. But when it comes to modern-day beauty representations, what we see daily is often a familiar spectrum of vanilla: white, gaunt, emotionless and airbrushed beyond recognition. Selfies are pushing back against that beauty ideal, through thousands of images of “real” women that they’ve created and shared themselves. “Selfies open up deep issues about who controls the image of women,” says Peggy Phelan, an art and English professor at Stanford University and the author of a recent essay about feminist selfies. “Selfies make possible a vast array of gazes that simply were not seen before.”

Selfies Take Advantage of a Platform That Girls Rule
It should be no surprise that, according to a recent survey by Dove, 63% of women believe social media — not print, film or music — is having the most pivotal impact on today’s definition of beauty. That’s because it’s a world where girls rule. Teens and young women use social media often and in more ways than men on almost every site, from Facebook to Instagram to Tumblr.

Selfies Allow Women to Own Their Flaws
Whether it’s Nicki Minaj sans makeup; the model Cara Delevingne modeling the grotesque; or Tavi Gevinson, the teen creator of Rookie magazine, noting the giant pimple on the “Upper West Side of my face,” there is something powerful in seeing normally flawless celebrities with actual flaws. On Twitter and Tumblr, the #FeministSelfie hashtag reveals an epic stream of women in all shapes and sizes, engaged in all sorts of activities, while #365FeministSelfie project — started by an administrator at the University of Illinois at Chicago — encourages women to take a snapshot of themselves each day for a year, no matter how they look. “We spend so much time trying to hide our flaws because the culture has set it up that you have to be ashamed if you’re not perfect,” Cynthia Wade, a filmmaker and creator of the short film Selfie told me recently, for an article about ugly selfies in the New York Times. “I think girls are tired of it.”

Selfies Give Girls Control
For centuries, we’ve watched as changing standards of beauty have shaped us: it was men, not women, controlling the photos. But selfies put the power in girls’ hands. “It allows you to have complete control over one moment in time,” 15-year-old Harper Glantz, one of the subjects of the film Selfie, told me a few months back. “In school, me and other girls sort of feel smothered just by social pressures that are hard to even detect sometimes. I think what a selfie does is that it really allows you to express yourself in a way that you feel comfortable with.”

Selfies Showcase Faces Not Normally on Display
“A huge swath of women and girls don’t see themselves portrayed in mainstream media,” explains Jennifer Pozner, a media critic and the founder of Women in Media and News, which aims to amplify female voices. And yet, through the sheer number of selfies uploaded daily — selfies that showcase women in all forms — women are upending notions about whose faces are beautiful, or mainstream, enough to be seen. “They’re breaking through the media gatekeepers,” says Pozner. “And they’re saying, ‘I’m great the way I am.’”

Selfies Are a Form of Social Currency
James Franco’s recent ridiculousness aside, the actor made a good point when he wrote, in an op-ed in the New York Times, that “attention is power.” “In a visual culture,” he said, “the selfie quickly and easily shows, not tells, how you’re feeling, where you are, what you’re doing. In our age of social media, the selfie is the new way to look someone right in the eye and say, ‘Hello, this is me.’”

Selfies Challenge the Notion That You Need a Reason to Be Seen
Narcissus may have drowned because he was too enchanted with his own reflection, but selfies challenge the idea that girls can’t revel in their own reflection — or feel good about a photo of themselves. “Selfies are one way for a female to make space for herself in the world: to say ‘I’m here, this is what I actually look like, my story counts, too,'” says Pamela Grossman, the director of visual trends at Getty Images, and my co-curator on a feminist photo-curation project. “They allow girls to shine on their own terms.”

Selfies Aren’t Just About What You Look Like, They’re About What You’re Doing
Whether it’s solving a math equation or crossing a marathon finish line.

Selfies Force Us to See Ourselves
To celebrate what we look like — flaws and all.

Bennett is a contributing columnist at TIME.com covering the intersection of gender, sexuality, business and pop culture. A former Newsweek senior writer and executive editor of Tumblr, she is a contributing editor for Sheryl Sandberg’s women’s foundation, Lean In, where she curates the Lean In Collection with Getty Images. You can follow her @jess7bennett. 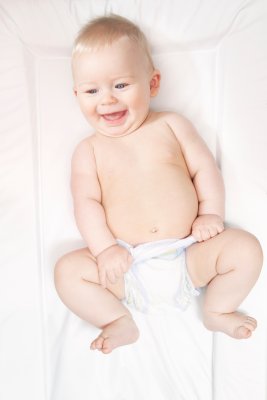 Mom Says She Was Booted For Changing Diaper at Restaurant Table
Next Up: Editor's Pick