Islamic militants continued their violent advance across Iraq Sunday as the humanitarian crisis escalated over the weekend, despite military action by the U.S. Thousands of religious minority Yazidis remain trapped by Sunni extremists in the country’s north even as Kurdistan, Iraq’s semiautonomous bastion of security, begins to look vulnerable.

On Sunday, Kurdish forces were able to rescue some 20,000 Yazidi Iraqis who had been trapped on Mount Sinjar, but many thousands remain trapped as the Islamic State in Iraq and Syria (ISIS) makes its brutal advance north. An Iraqi government minister told Reuters that militants slaughtered 500 Yazidis on Sunday, including woman and children, and buried some alive — though there was no independent confirmation of the alleged massacre.

The U.S. has raised the stakes by committing to airstrikes against the militants as well as air drops to supply refugees with food and water. President Obama announced Saturday there would be no timetable for an end to U.S. support in the country.

Moises Saman, a longtime chronicler of conflicts in the Middle East who has covered the Arab Spring and the Syrian civil war, is in Iraq, photographing the impact of the conflict on the Yazidi population for TIME. On Sunday, he went to a border crossing into Kurdistan at Fishkhabur, where thousands of fleeing Yazidi refugees from the Sinjar mountains are seeking shelter. He spoke briefly with TIME from his hotel room.

14-year-old Tawaf Ismail, a Yazidi girl from Sinjar, rests next to her brothers after arriving at the Fishkhabur border crossing between Iraq's Dohuk Province and Syria, Aug. 10, 2014.
Moises Saman—Magnum for TIME

TIME: What did you see today?
MS: There were thousands of families streaming through the [Fishkhabur] crossing, which is kind of an improvised bridge that’s been built over the river. Just a constant stream of people. It was mostly women and children. People were extremely tired. A lot of people just collapsed when they arrived. You could tell that they’ve been spending days outside. A lot of them didn’t have shoes and were extremely dirty.

Everybody was saying they’d been walking for days without food and water. That was the common thing I got from people they encountered. They’d been through this very traumatic journey, and they’re terrified and exhausted, and happy to be safe. But they’re too traumatized to savor that.

What is the humanitarian situation like when refugees arrive in Kurdistan?

The aid wasn’t very organized. There were people handing out water and I saw people handing out shoes and things like that, but it wasn’t as organized as you’d find in a refugee camp. They’re trying to improvise because they didn’t expect a massive influx of people here. They’re just trying to do the best they can.

A Yazidi family from Sinjar arrive at the Fishkhabur border crossing between Iraq's Dohuk Province and Syria, Aug. 10, 2014.
Moises Saman—Magnum for TIME

How have Iraqis you’ve met reacted to the advance of ISIS militants?

Here you just hear “ISIS” in every conversation. It’s this scary thing that’s out there. ISIS has been so good at creating this propaganda that they’re so ruthless, and I think people are really scared of the. People do talk about [the militants] kidnapping women, the violence and beheadings. That their ruthlessness doesn’t seem to have a limit. It’s very dark and very real to people.

And ISIS is very much out there, taking towns and villages and been getting very close to [the regional capital of] Erbil, so I think the fear is very much real. People hearing rumors that they’re coming or advancing makes them flee ahead of them. That’s creating this dynamic that people are scared to death even just by rumors. That’s what seems to be creating this massive movement of people right now.

How much are Iraqis talking about U.S. aid or military assistance?
I didn’t pick up on that here. I think right now they’re not really aware. They don’t really know what’s happening as far as Americans bombing goes, and I didn’t pick up any “thank you” America kind of thing.

You’ve covered the civil war in Syria, where ISIS first gained a foothold. You’ve also been to Kurdistan in the last few months. What’s different now?

The number of women and children and old people surprised me. And people [in Kurdistan] seem more edgy. There are more people with guns out in the street, and you get the sense that it’s much more tense than a month ago.

This interview has been edited for clarity 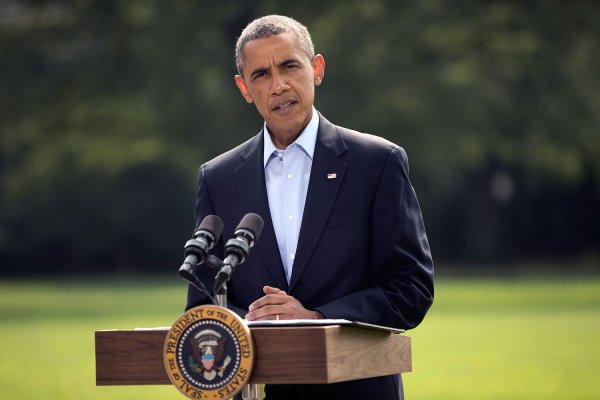 Live: Obama Speaks About Iraq
Next Up: Editor's Pick