Mayday PAC, the political action committee determined to spearhead a revolution in the way elections are funded in America, announces Monday three candidates it’s supporting in 2014, plus the news that the Super PAC will deploy resources in three additional races.

“The picture of diversity we saw when we put these three together was cutting across the spectrum,” Mayday PAC co-founder Lawrence Lessig told TIME. “Willing to take on Democrats, willing to support Republicans, and obviously eager to support more people pushing for reform.”

Mayday PAC will publicly unveil support for three candidates Monday; incumbents Rep. Walter Jones (R—N.C.) and Rep. Carol Shea-Porter (D—N.H.), and Ruben Gallego, a Democrat running for his party’s nomination in Arizona’s 7th congressional district. None of the candidates was consulted before being selected by the PAC, nor were they informed of their selection before the public announcement.

Choosing Jones was a “no-brainer,” Lessig said. “It was important for us to stand with the only actually elected Republican who’s taken this issue up, that’s actually co-sponsored legislation to change the way elections are funded.” The libertarian-leaning Republican and longtime supporter of serious campaign finance reform legislation has represented North Carolina’s third district since 1995. “I don’t think people are going to think Walter Jones will win this race because of this issue. We’re obviously spending to make it clear that he’s a very important part of this alliance as well,” Lessig said.

Shea-Porter, a Democrat locked in a tight re-election battle in New Hampshire’s 1st district, has voiced support for the kind of reforms Mayday PAC is backing and has even pledged to keep third-party spending (a.k.a. Super PAC money) out of the race, calling on her rivals to do the same. “Carol Shea-Porter has been not only pushing for reform but living her own campaign life in a way that is all about reform,” Lessig said. “She doesn’t take PAC money and she’s a big believer that you can actually run and win campaigns that way.”

(It’s an open question, then, if Shea-Porter will react to Mayday PAC’s support. The irony of a Super PAC supporting candidates who disdain Super PACs isn’t lost on Lessig; he has come up with a slogan for the phenomenon: “Embrace the irony.”)

Ruben Gallego, the third candidate, is a former state representative and a progressive Democrat running against “what some are calling a more corporate Democrat,” says Lessig. That would be Mary Rose Wilcox, who has the endorsement of the retiring congressman Ed Pastor and the powerful pro-choice PAC Emily’s List. Arizona’s Aug. 26 Democratic primary is slated to be the first test of Mayday PAC’s mettle.

In addition to the five candidates the group has announced to date, Mayday PAC told TIME the group plans to support three additional candidates. “The next three are the really hard ones that we’re struggling with,” Lessig says. “Struggling in the sense that we’re thinking about races that are going to be incredibly hard.”

Mayday PAC’s first five candidates were selected because they back the kind of campaign finance overhaul the group hopes to usher in. But the next three will likely be opponents of politicians the group sees as enemies of reform, Lessig says. Mayday PAC plans to launch the next phase of its mission as a series of surprise attacks, announcing the candidates it’s backing only when the group is ready to instantly deploy resources in those races.

“We’re thinking about taking on serious incumbents nobody would think can be beat,” Lessig says. “But we want to beat them on the basis of this issue.” 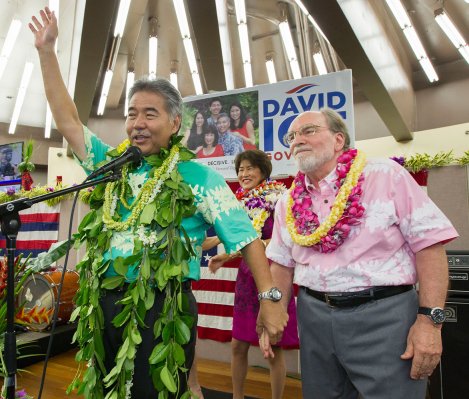 Hawaii Voters Say Aloha to Governor
Next Up: Editor's Pick