Emory University Hospital faced its share of doubters when it built its serious-communicable-disease unit more than a decade ago. At a time when the threat of infectious diseases in the U.S. seemed to have receded — replaced by worries over conditions like obesity and Type 2 diabetes — the center appeared unnecessary. But last week, when Emory got word that two Americans were infected with Ebola and would need to be evacuated from West Africa, health experts were all too glad the unit existed.

“I have to admit, a lot of people saw this as Noah’s Ark,” says Dr. Bruce Ribner, the infectious-disease specialist at Emory University Hospital leading the care of the American patients with Ebola virus. “They thought, ‘You are not going to have any activity there, you’re just wasting your time with all that.’”

Now Ribner is fielding an average of 100 emails a day from hospitals here and abroad seeking consultations, and there’s a caravan of news vans seemingly permanently parked along the sidewalk in front of the hospital, with news crews braving the thick Georgia heat in pitched tents on the grass.

“When [news of the patients] finally came, we said, ‘This is what we’ve been preparing for for 12 years,’” says Ribner. Indeed, the infectious-disease team caring for the patients with Ebola has been practicing the process of receiving and treating patients with serious diseases — like Ebola, SARS or anthrax — about two times a year every year since 2002, when it created its program and isolation unit with the help of the Centers for Disease Control and Prevention (CDC).

Dr. Alexander Isakov, who helped get the patients from their landed flight to the isolation room, remembers first hearing the news and thinking, Here’s a chance to finally activate all that they had been preparing for, to help people get better. “It’s gratifying,” he says.

Though Emory’s isolation unit was created with this precise type of health emergency in mind, experts stress that nearly all U.S. hospitals are equipped and prepared to receive a patient suspected to have contracted Ebola. When both patients were moved from the ambulance into the hospital, choppers ahead captured footage of the full-body protective suits with air-purifying respirators that were worn by the team. Emory says it’s trying to re-message the idea that physicians need to dress in what some are calling “moon suits” to care for a patient.

“Of course the message goes out that you have to dress like some sort of space person,” says Ribner. “Which is an unfortunate message.” The CDC recommends that anyone entering a patient with Ebola’s room wear at least gloves, a gown, eye protection and a face mask, with the acknowledgement that depending on the amount of fluids being excreted, more may be needed. The hospital agrees with this advice, and Ribner says his nurses felt more comfortable wearing the full-body suits. One of the features of Ebola-virus infection is diarrhea. “One [reason from our nurses] was just pragmatic: I don’t want my shoes full of feces. The other was, ‘You know what? These are kind of comfortable,’” says Ribner.

(The patients at Emory have requested privacy, but one released a statement Saturday saying he was getting “stronger every day.”)

Now that more cases of Ebola are spreading in Lagos, a highly trafficked city in Nigeria, the possibility for more patients in the U.S. is not out of the realm of possibility. “If we had to accept other Ebola patients — and we’ve been in contact about possibly doing that — we could do it,” said Dr. G. Marshall Lyon, one of the Emory physicians treating the patients with Ebola. Lyon says the unit also has a contract with the CDC to handle their employees, should any of them be exposed to serious communicable diseases.

A New Age of Infectious Diseases

While Ebola is new in the U.S., it’s not a novel virus, and health experts remain confident that the outbreak will eventually subside. Still, the current Ebola outbreak, the deadliest in history, begs the question: Is the U.S. prepared for other infectious, and even unknown, emerging diseases?

“We live in a world where we are all connected by the air we breathe, the water we drink, the food we eat, and by airplanes that can bring disease from anywhere to anywhere in a day,” says CDC Director Dr. Tom Frieden. “That’s why it’s so important to strengthen global health security and work with countries all around the world so they can do a better job finding threats.” (In recent months, the CDC experienced two lapses in lab safety that raised skepticism about protection oversight, to which Frieden assures, “We blew the whistle on ourselves and began a comprehensive and aggressive program to address lab safety here.”)

In his opinion, the U.S. is facing three threats when it comes to emerging disease: new infections and organisms spreading in different places; drug-resistant bacteria; and intentionally created organisms. “Those risks require us to put in place robust systems,” he says.

Lyon says he remembers reading an article about 20 years ago stating the age of infectious disease was over. It couldn’t have been more wrong. “The bugs have evolved and kept us on our toes,” he says. “We have to deal with things like tuberculosis and measles having a resurgence.”

In 2009, H1N1 emerged as an influenza virus with little known about its transmission or how virulent it was. Ribner says, “We were really lucky” it wasn’t more lethal. “Do I foresee down the road that we could have a more virulent influenza strain? We’ve had them in the past, so yeah, we could,” he says. “Would we handle it? We would handle it as best we could.”

Learning on the Job

Having two patients with Ebola under treatment in the U.S. not only gives them a better shot at life, but it grants doctors the opportunity to learn something. “We have the unique opportunity to look at a disease that we don’t usually see here,” Dr. Aneesh Mehta, the Emory physician who had what he calls the “honor” to be the first doctor to receive an Ebola patient into the isolation room. “For these two patients, if they agree to participate in research down the road, we will be able to really look in-depth at the pathogenesis and the immunological response to Ebola in ways that can’t be done in Africa.”

Mehta says the drills at Emory — as well as the attention being paid to the effectiveness of governmental responses to this pathogen — will help experts better understand how to take care of patients in the larger context of our health care system. “We can teach other health care systems and physicians not only here in the United States, but throughout the world because our processes seem to be working quite well.”

Dr. Jay Varkey, a physician who joined the Ebola care team this weekend, agrees. “My hope is that by providing excellent care here, that learn processes that can be translated and expanded. In my opinion, in a fair and just world, if these processes are really key to improving survival in a disease like Ebola, that countries that are developing can institute them.”

The Emory team is working 24/7 to neutralize the disease in the two infected Americans, and while it’s uncomfortable to be faced with the dark consequences of our interconnectedness, it’s comforting to know that for over a decade, despite questioning, highly trained specialists have been watching our backs. 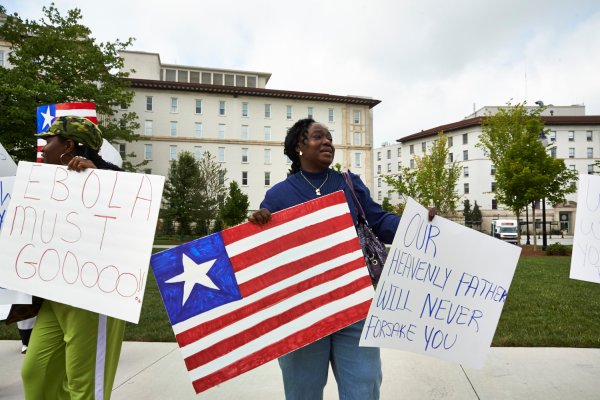