Landmark College Sports Verdict: Harsh, but in the End Puzzling

Since the pace of change in college sports is glacial, consider the events of this year – even this past week – a revolution. The latest came down on Friday: a federal judge in the Northern District of California handed down her much-anticipated ruling in the Ed O’Bannon anti-trust case. In a crushing defeat for the NCAA, Judge Claudia Wilken picked apart the NCAA’s long-cherished – though clearly illogical – reasons for failing to fairly compensate college athletes in the sports that produce the bulk of the revenues. Big-time college football players and Division 1 basketball players are now able to earn a cut of licensing revenues from the use of their name, image, and likeness; schools can cap this pay, but the minimum cap is $5,000 per year. This money will be put in a trust that an athlete can access once he or she has graduated or left the school.

The NCAA will very likely appeal the ruling. “We disagree with the Court’s decision that the NCAA rules violate antitrust laws,” NCAA chief legal officer Donald Remy said in a statement. Wilken said that her injunction could not be stayed during any legal challenge, but would not go into effect until beginning of the next football and basketball recruiting cycles, which get going during the summer of 2015. If the case survives appeal, all future athletes who leave school having earned at least $20,000 during a four-year career owe a debt to O’Bannon. The former UCLA hoops star, who won a national title in 1995, first brought the case forward in 2009 after noticing that his image was being used in a college basketball video game, yet he didn’t receive a dime.

The NCAA has been smacked around. The courts – and some of the schools themselves – have recognized the fundamental hypocrisy of college sports: revenues have soared, and coaches can make millions, while compensation for athletes is limited to a scholarship. Free tuition, room and board is valuable, surely, but many players are worth even more. Wilken also determined that the NCAA could not cap direct compensation below the cost of attendance, which is an extra $2,000 to $5,000 above the athletic scholarship grant covering personal expenses like transportation, clothing and entertainment. The schools, however, had already moved on that one: the NCAA voted on Thursday to allow schools in the Big 5 power conferences – the ACC, Big 10, Big 12, Pac 12 and SEC – to set some of their own rules, and these schools are prepared to offer their athletes these cost-of-attendance stipends. Schools in the other Division 1 conferences are welcome to join them.

In March, a regional director for the National Labor Relations Board ruled that football players at Northwestern University are indeed employees, and directed the school to hold a unionization vote. The board’s national office has yet to weigh in on the school’s appeal. Unions could help players gain than even more money at the bargaining table.

“If you look at the Northwestern union decision and the O’Bannon case, here you have two significant departures from the way judges and the government traditionally view at the role of student-athletes in college athletics,” says Gabe Feldman, director of the Tulane University Sports Law Program. “If this is the trend, it could be the beginning of the end of the NCAA’s model,” Feldman added.

Wilken’s injunction alone did not entirely blow up the NCAA’s business. Schools can still cap trust payments at $5,000 per year and prevent athletes from receiving third-party endorsements. But her condemnation of the NCAA is sweeping, and almost invites a future plaintiff to try to tear everything down and create a true open market for college athletes.

Some damning examples from the text of the ruling:

One key question does arise from Wilken’s finding: If the NCAA’s current payment cap is anti-competitive and harms athletes, why is the cap on a trust fund, somewhat arbitrarily set at $5,000 per year, not anti-competitive? While Wilken goes on for pages ripping apart the NCAA’s arguments with strong evidence, the support for her own assertion that compensation limits are justified is far less convincing.

In the ruling, for example, Wilken addresses the main concern about a true open labor market: “These administrators noted, depending on how much compensation was ultimately awarded, some student-athletes might receive more money from the school than their professors. Student-athletes might be more inclined to separate themselves from the broader campus community by living and socializing off campus.”

Wilken then brings up the flaws of such thinking. “It is not clear that any of the potential problems identified by the NCAA’s witnesses would be unique to student athletes.” Yup, there are plenty of kids on college campuses with lush trust funds and nice cars and access to spending money on college campuses. Most of them haven’t earned it. That’s fine. But if a kid who has worked his tail off playing football or basketball, who might be from a poor family, who’s helping generate millions for the school, is paid a market wage and sets foot on campus with some cash? That’s somehow offensive.

The judge goes here with her line of questioning. “In fact, when the Court asked Dr. Emmert whether other wealthy students – such as those from rich families or start successful businesses during school – raise all of the same problems for campus relations, he replied that they did.” What, really? Haven’t heard of the rich-kid scourge tearing apart college campuses. Wilken continues: “It is also not clear why paying student-athletes would be any more problematic for campus relations than paying other students who provide services to the university, such as members of the student government or school newspaper.”

In three sentences, Wilken legitimizes the arguments pay-for-play advocates have been making for years. So her big conclusion is … “Nonetheless, the Court finds that certain limited restrictions on student-athlete compensation may help integrate student-athletes into the academic communities of their schools, which may in turn improve the schools’ education product.”

After this puzzling paragraph, she does site some justification for her finding. She refers to a survey in which many respondents said they would be less likely to watch college athletics if players were paid $20,000 or $50,000 per year. Wilken supposes that respondents would say they’d keep watching college sports if they had been given a lower figure in the survey – like, say, $5,000 per year. Wilken might be correct. But assumed answers to a survey is pretty weak evidence to support a legal ruling.

She gives some weight to the testimony of Stanford Athletic Director Bernard Muir, who said, “Where I set the dollar limit, you know, that varies, but it does concern me when we’re talking about six figures, seven figures in some cases.” Muir, however, is far from an independent witness. Stanford is a member of the NCAA. So we’re setting compensation caps because an employer would rather not pay an employee big money? Of course Muir is not comfy; he’s management, and every employer on the planet tries to keep labor costs as low as possible. And by the way, would a six, seven figure paycheck be as concerning to the athlete who actually received it?

Plus, by bringing up baseball to knock down the NCAA, Wilken undermines her own arguments. Yes, free agency showed that players making money would not destroy the sport. In fact, free agents compete in an open market, make millions and millions of dollars – and baseball is still popular. So why wouldn’t college sports still be popular, if the athletes – most of whom would make far, far less than pro baseball players – had the opportunity to maximize their wealth?

Such unanswered questions could be tackled by future plaintiffs – and their lawyers. Wilken, maybe by design, has left grist for more legal challenges to the college sports model. One suit already filed, and likely boosted by the O’Bannon ruling, is an anti-trust claim led by high-profile sports labor lawyer Jeffrey Kessler, who helped NFL players gain free agency. He’s essentially seeking the same for college players.

The next Ed O’Bannon, now’s your time. 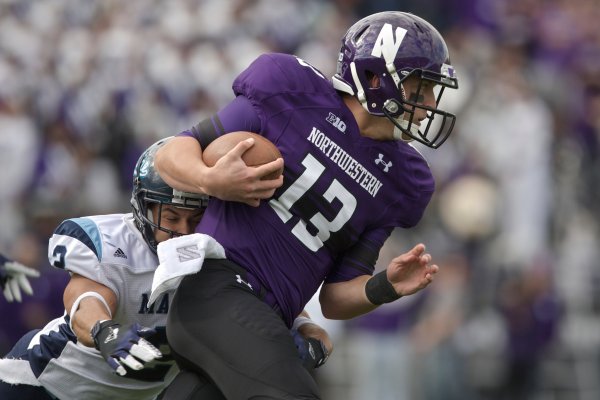 Some College Athletes Will Now Get Paid—a Little
Next Up: Editor's Pick