'My People May Soon Be Gone'

Iraqi Yezidi people flee from Sinjar town of Mosul to Turkey due to the attacks of Islamic State-led armed groups in Silopi district of Turkey's Sirnak city, on August 7, 2014.
Anadolu Agency—Getty Images
By Jeremy Courtney

My friend Sinan and I were on the phone with a dying young man.

But this 23-year-old Iraqi was not dying from a car crash or a bullet wound. He was one of the estimated 50,000 Yazidis stranded on Sinjar Mountain who have been dying of thirst, besieged by Islamic State of Iraq and Syria militants.

“It is difficult to speak since I haven’t had water in three days,” the man wheezed through the line. “We don’t have anything–food, water, a place to sleep. We are eating the trees and their leaves. The [Kurdish] peshmerga hasn’t come, the Iraqi army hasn’t come, humanitarian aid hasn’t come. There are so many thousands of people here. I know at least 100 people have died already, many of them children.”

I could see Sinan, also a Yazidi and a friend of the man, becoming emotional, his bottom lip beginning to twitch. After we hung up, Sinan began sobbing into his hands. Two of his friends came over and patted him on the back, offering the standard condolence: “God-willing, things will get better.”

When they left, Sinan whispered through his palms, “They can’t understand. They are Muslim. Their religion is big, they are not alone like we are.”

It took me a minute to understand him, but he was right, and I can’t really understand either. As a Christian, it’s impossible for me or for our Muslim friends to truly understand life as a religious minority in the global sense, especially one as small and marginalized as the Yazidis.

Yazidis, who practice what is considered one of the oldest religions in the world, are monotheists who believe God (or Yasdan) created the world and seven angelic beings to govern it. The most prominent of these beings is Malak Tawous, an angel whom Muslims and Christians often identify with Satan. The Yazidis’ reverence for a being considered by other religions to be evil led many (particularly Muslims) to deem them “Satan worshippers” and Muslim and Christians alike have used that term to demonize Yazidis and to justify persecution against them.

By most estimates, there are only about half a million Yazidis left in Iraq, which means a significant number of their already dwindling population is on that mountain now, still dying, even as the United States has initiated humanitarian air drops and reportedly considers rescue missions.

As we talked a little more, Sinan showed me the updates his friends and family members were sharing via their cell phones in real time, while under siege. “He was studying math at the university,” “she baked the best naan bread,” “this man’s daughter is missing,” he would say as he thumbed through Facebook.

Sinan finally stood up and pocketed his phone, saying he needed to go. He asked me to “tell America” about his people.

Now tremendous American, Iraqi, and Kurdish efforts are being made, but the situation is still dire for many on the mountain who cannot reach the aid that has been dropped, for those displaced in cities and on highways, and for the hundreds of Yazidi women who were just taken captive by Islamic State of Iraq and Syria militants.

“My people may be gone soon,” Sinan said as he walked away.

Today, the U.S. is actively working to make sure that doesn’t happen. 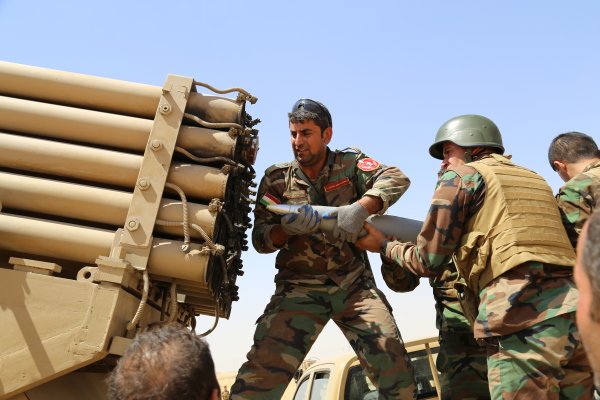 Iraq War Soldier 10 Years Later: What Was It All For?
Next Up: Editor's Pick