ISIS Is Ignoring Islam's Teachings on Yazidis and Christians

Displaced families from the minority Yazidi sect, fleeing the violence in the Iraqi town of Sinjar, west of Mosul, arrive at Dohuk province, Aug. 4, 2014
Ari Jalal—Reuters
By Sohaib N. Sultan

The news coming out of Iraq is really devastating. The violent extremist group known as the Islamic State of Iraq and Greater Syria (ISIS) continues to take over major parts of Iraq, brutally killing and oppressing any and all who come in their way. The worst of ISIS has been unleashed on Shi‘ite Muslims, Christians and the Yazidis with hundreds of thousands killed and forced to flee.

The leader of ISIS, Abu Bakr al-Baghdadi, is as dangerous as he is delusional. In a sermon that he gave several weeks ago, the ISIS leader declared himself as the new “Caliph” of Muslims worldwide. In the sermon he attempted to reflect the personality of Islam’s first Caliph, Abu Bakr al-Sadiq, in asking those gathered to help him when he is right and correct him when he is wrong and to only obey him so long as he obeys God and the Messenger. But, the Quran warns its readers to not be swayed by charismatic figures who, in reality, only spread evil in the world:

“Now, there is a kind of man whose views on the life of this world may please thee greatly, and [the more so as] he cites God as witness to what is in his heart and is, moreover, exceedingly skillful in argument. But whenever he prevails, he goes about the earth spreading corruption and destroying property and progeny [even though] God does not like corruption. And whenever he is told, ‘Be conscious of God,’ his false pride drives him into [even greater] sin …” (2:204–2:206).

So, I join the chorus of Muslims worldwide, Sunnis and Shi‘ites, who oppose al-Baghdadi and ISIS as a whole. The killing and oppression of innocent people and the destruction of land and property is completely antithetical to Islam’s normative teachings. It’s as pure and as simple as that.

Ironically, when the Quran allows (and, sometimes, even encourages) Muslims to engage in just fighting and resistance, it is in order to deter those who wage wars without just cause and those who engage in religious persecution — exact crimes that the ISIS is engaging in Iraq today:

“Permission [to fight] is given to those against whom war is being wrongfully waged … those who have been driven from their homelands against all right for no other reason than their saying, ‘Our Sustainer is God!’ For, if God had not enabled people to defend themselves against one another, monasteries and churches and synagogues and mosques — in which God’s name is abundantly extolled would surely have been destroyed …” (22:39–22:40)

The Yazidis are an ancient community that have been in Iraq for centuries. Historically the Yazidis follow Zoroastrianism and other ancient Mesopotamian religions. Throughout recent history the Yazidis have been oppressed and their religion largely misunderstood as Satan worship (which it is not). The violence and suffering that ISIS has inflicted upon the Yazidis is heart wrenching. There is, arguably, one reference to the ancient religion of the Yazidis (referred to as Magians) in the Quran in which it simply says, “Verily, as for those who have attained to faith [in this divine writ], and those who follow the Jewish faith, and the Sabians, and the Christians, and the Magians [on the one hand,] and those who are bent on ascribing divinity to aught but God, [on the other,] verily, God will decide between them on Resurrection Day: for, behold, God is witness unto everything” (22:17). ISIS would do well to, truly, let God decide rather than act as tyrannical judges and lords over the Yazidis and others.

ISIS is also reportedly seeking to expel Christians from their homeland of Iraq where Christians have lived since almost the beginning of their history. Christians in Iraq are considered to be one of the oldest continuous surviving Christian communities in the world. Christians in Iraq have survived, and at times even thrived, alongside Muslims over the past 1,400 years. ISIS insistence that Christians either “convert, leave or die” defies the Quranic command: “Let there be no compulsion in religion” (2:256).

ISIS has also given Christians another option if they want to remain in Iraq: to pay jizya. Jizya is a tax that Muslim empires imposed upon non-Muslim constituents in return for military exemption, protection against persecution and considerable religious freedoms. Most Muslim countries today no longer impose jizya on non-Muslims. The change in political order, rise of nation states and assumptions of citizenship today render certain medieval systems incongruent with modern realities and sensibilities. The Quran makes a reference to the jizya system (9:29), but its application is vague and it can very well be argued that such an imposition was only intended to manage troublesome and treacherous religious minorities. This is all to say that ISIS has no basis whatsoever to force Christians in Iraq to pay the jizya let alone the fact that they cannot even be considered a legitimate government by any stretch of the imagination and, therefore, cannot rightfully impose any taxes on anyone.

The strongest argument against ISIS persecution of Christians is the fact that such actions are in direct violation of the Prophet Muhammad’s own treaties with Christians in which he guarantees the protection of religious freedom and other rights:

(The original letter is now in the Topkapi Museum in Istanbul.)

This and many similar covenants between the Prophet Muhammad and Christian communities are well documented and translated by John Andrew Morrow in his book, The Covenants of the Prophet Muhammad With the Christians of the World. These covenants are a determining proof, among other proofs, that what ISIS is engaged in right now in Iraq is completely unlawful (haram) and violates Islamic teachings in every way.

To ISIS or anyone who sympathizes with them, know that Islam believes in a God of mercy, a scripture of mercy and a Prophet sent as a mercy to all the worlds. It is time to abandon persecution and violence, murder and mayhem. The enemy you seek to fight is within you. The pursuit of power is the problem. The pursuit of peace and social justice is what God really calls us to. Put down your arms. And raise your hands to the sky seeking God’s forgiveness for unconscionable sins.

Sultan is the Muslim chaplain at Princeton University and directs the university’s Muslim Life Program in the Office of Religious Life. He is the author of The Koran for Dummies and The Qur’an and Sayings of the Prophet Muhammad: Selections Annotated and Explained. 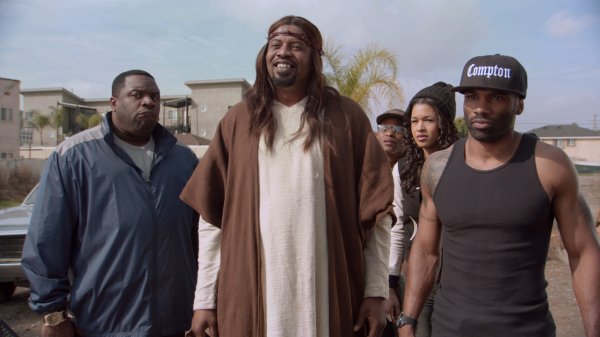 Black Jesus: We Have Other Things to Boycott
Next Up: Editor's Pick