I have a confession to make. Before I had kids, I was uncomfortable with moms breastfeeding their babies in public. Specifically, I thought it was offensive when they did it in restaurants.

My narrow view at the time saw it as women exposing themselves at tables populated by men, women and children simply trying to enjoy a meal. Why couldn’t they do that out in the car or in the bathroom? At the very least they could cover up and sit off in the corner. It’s just common decency, right?

Naturally, once I became a father and gained some perspective, I realized how ridiculous I was being. Breastfeeding is the healthiest way to nurture a baby and one of the most natural and instinctive things a mother can do for her child. It isn’t something that should be hidden away or made out as shameful. If anything, it should be celebrated and encouraged.

Any restaurant employees or patrons upset at breastfeeding moms are flirting with near fatal levels of hypocrisy, as there are some truly annoying things that happen during meals that are far more offensive than a woman breastfeeding her child. So in observance of World Breastfeeding Week, here are my top seven.

So, you think breastfeeding moms are revealing too much? Then I hope you’re not one of the dozens of people who go out to dinner and inevitably have awkwardly personal cell phone conversations within earshot of everyone. A mother feeding her child isn’t nearly as offensive and inappropriate as a room full of strangers knowing intricate details of your most recent colonoscopy.

As someone who worked in restaurants, I can say without a shadow of a doubt I’d rather wait on an army of breastfeeding moms than deal with one large group who hands over 10 different credit cards and asks to split the bill evenly. If anyone should go to the bathroom and feel shame for a few minutes, it’s check-splitters.

5. The Sound of Your Eating

Misophonia: a neurological disorder in which negative experiences are triggered by specific sounds. While some people claim they need bleach for their eyes after seeing the “horror” of a woman’s partially exposed breast giving the milk of life to her baby, that same person could be horrifying nearby diners with lip-smacking, open-mouthed, wet chewing noises that easily drown out any sound of suckling from the baby.

Too many people complain about seeing gratuitous flesh when moms are feeding their babies, and not paying enough attention to leaving the waiter or waitress an adequate gratuity. It’s ironic these people are full of generous suggestions for mothers regarding how, when and where to feed their children, yet their generosity is nowhere to be found when it’s time to leave a tip.

Stop. Instagramming. Your. Dinner. People complain about nursing mothers in restaurants being exhibitionists, yet they’re taking 27 pictures of the food they’re about to consume so they can post it on various social media platforms for the world to see. At least breastfeeding is productive.

2. Hitting on the Wait Staff

Women baring their breasts in restaurants are inappropriate and unbecoming? That’s funny, since I’ve seen moron after moron staring at the breasts (and other parts) of their waitress, and then engage in a pathetic attempt to hit on her. For people so quick to be the moral arbiters of breastfeeding in public, decorum quickly disintegrates when it comes to their delusions of grandeur regarding their waitress’s nonexistent romantic interest.

We get it, you think breastfeeding in public is gross. Do you know how we know you think that? It’s because your “drunk whisper” is actually a sonic boom reaching even the far corners of the restaurant. While these people lament the lack of common decency amongst breastfeeding moms, they seem to have no care in the world when it comes to screaming, being belligerent and making drunken asses of themselves while mothers quietly feed their kids.

If we’re going to encourage mothers to breastfeed, then we need to get over ourselves and stop sexualizing breastfeeding. We also need to stop making mothers feel ashamed and self-conscious for it, while attempting to relegate them to the bathroom during feedings. And if common sense isn’t enough to make this a reality, then we need more laws on the books protecting the rights of moms to feed their kids not just in restaurants, but anywhere out in public. 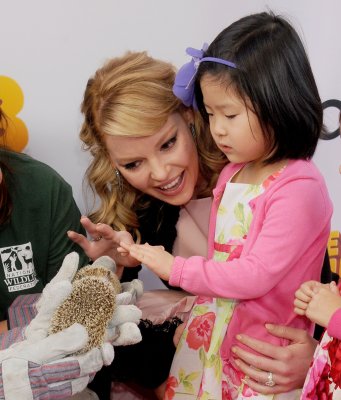 Katherine Heigl on Being a Working Mom: 'My Priorities Were Messed Up'
Next Up: Editor's Pick