American Carriers Are Now Banned From Flying Over Iraq

The Federal Aviation Administration has banned U.S. carriers from flying over Iraq, the agency announced Friday.

The ban was handed down just hours after the U.S. launched airstrikes in the country for the first time since U.S. troops pulled out of Iraq in December 2011. The American strikes were targeting forces from militant group the Islamic State of Iraq and Syria (ISIS) which were endangering Erbil, a city that’s home to a U.S. consulate and several American advisors.

ISIS has been taking control of several parts of Iraq, and the armed conflict between it, the Iraqi military and Kurdish forces in northern Iraq has created a “potentially hazardous situation,” the FAA told American pilots Friday. The FAA’s ban allows for certain exceptions if pilots get prior permission from the agency or if they need to divert into Iraqi airspace because of an emergency situation.

The move is the latest in a string of similar restrictions issued by the FAA, which recently temporarily banned U.S. carriers from flying into Israel’s main airport as fighting raged between the Israeli military and Hamas fighters in the Gaza Strip. It’s not yet clear if European aviation regulators will follow suit and also issue an Iraqi airspace ban, as they did with Israel in the wake of the Malaysia Airlines Flight 17 disaster, which was struck down by a missile last month while flying over violence-wrought eastern Ukraine.

The FAA on July 31 banned U.S. planes from flying in Iraqi airspace below flight level 300, or 30,000 feet. While U.S. commercial operators have historically been allowed to fly over Iraq at at least 20,000 feet, they have been banned from actually landing in Iraq since 2003. 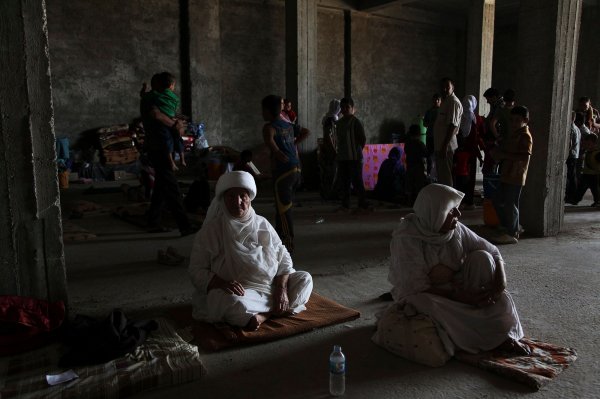 Everything You Need to Know About the Yazidis
Next Up: Editor's Pick