Fear and Rumors Fueling the Spread of Ebola

As the death toll rises from the Ebola epidemic in West Africa, confusion and rumor have made it harder for health care workers and government officials to combat the outbreak.

In the Liberian town of Bamudu, colleagues of Ingrid Gercama, education manager for the aid agency Africa Development Corps, were chased away by residents, who feared that the agency’s staff would take their infected relatives away for treatment. “Lots of people are really scared and not informed about what happens in the treatment centers,” says Gercama, a Dutch national currently on leave in Amsterdam. “They see people going into the hospitals and coming out in body bags.”

The only way to halt Ebola’s deadly march is to identify the infected, isolate them and track down anyone they’ve been in physical contact with. But this is easier said than done. “A lot of the messaging has been saying ‘there’s no cure, no treatment’ so people are saying, ‘why should I go to hospital?'” notes Sean Casey, the Ebola Emergency Response Team Director at International Medical Corps, a global aid agency now working in Sierra Leone.

Infected people will go to extraordinary lengths to avoid detection, including, Casey adds, changing their names. In Liberia, international non-governmental organizations are starting to realize their Ebola messaging may have added to the confusion, not cleared it up. “NGOs are now trying to spread a more positive message,” says Gercama. “Rather than saying Ebola is deadly, there’s no cure, you can’t protect yourself, they’re trying to emphasise the 40% who are surviving.”

But fear of the disease is widespread across West Africa. The Telegraph reported that in Guinea’s capital of Conakry, on August 7 emergency services let a man lie in the street for almost five hours after he collapsed. It wasn’t clear whether he had Ebola. In Liberia, unconfirmed reports came in from The Liberian Observer that people were poisoning water wells around Monrovia, while state radio claimed 10 died in Dolostown after drinking water that was supposedly poisoned. Though unsubstantiated rumor, the story hasn’t gone unnoticed. Liberians told Gercama the mysterious poisoners could be trying to raise the death toll and so gain more international aid. Others said it was a form of witchcraft to combat the epidemic.

In the afflicted countries some are turning to traditional healers rather than science in a bid to combat the disease. In Duala, a market area in Liberia, an exorcism was performed on an Ebola patient. “They brought him into a church and they all touched him and were chanting,” says Gercama whose colleague witnessed the exorcism. Other Liberian healers suggest rubbing the body with limes and onions to combat Ebola while unscrupulous merchants peddle “Ebola vaccinations” at extortionate rates, says Gercama.

Similar “cures” are sweeping through Nigeria. “An unfortunate thing happened overnight: some evil-minded persons … have been circulating through all available communication channels … that ordinary hot water and—if you add salt—will prevent Ebola virus disease,” said Onyebuchi Chukwu, Nigeria’s health minister on August 8. “This is a complete lie … We need to flush out these people and they have to be arrested – they will be prosecuted.” But Chukwu’s statement may have come too late for some. Two leading Nigerian newspapers, citing unnamed sources, reported that excessive salt consumption led to two deaths and 20 hospitalizations in Plateau state.

In countries where health care workers are fleeing the disease, those who claim to understand and defeat Ebola through non-scientific means might be appear to be a welcome alternative—or a last resort. “Doctors and nurses are leaving their posts,” says Casey, who is an American national now based in Freetown, Sierra Leone. “[Treating Ebola] is a serious undertaking.” In their absence, Sierra Leone’s main treatment center, Doctors Without Border’s 50-bed facility in Kailahun, only has about five beds available, according to Casey.

The situation is no better in Liberia says Gercama, the education manager for Africa Development Corps, which is working with UNICEF in the region. “There aren’t enough people to collect all the bodies, there are dead people lying in the streets.” Like Sierra Leone, health care workers are fleeing or thin on the ground. “A colleague of mine said in his community in Clara Town two people contracted the Ebola virus and died,” adds Gercama. “Their families contacted the health officials to collect the bodies but no one picked up. The corpses remained in the house for three days.” Even aid organizations are leaving. After two of their U.S. staff were infected, humanitarian organization Samaritan’s Purse handed over the running of their clinics in Liberia to Doctors Without Borders and the Liberian Ministry of Health.

Amidst the chaos, the disease continues to spread. Casey predicts Ebola will continue to claim lives in the region for “the next few months at least.” He noted that Ebola hasn’t stabilized in any of the infected countries. Though Guinea hasn’t reported any new cases, the tiny country, which has had the highest number of fatalities, announced four new deaths Friday.

In Guinea, Liberia and Sierra Leone, where hardly any areas have been left untouched, the word “Ebola” is on the lips of many, even if its not fully understood. In Nigeria however, the virus is unknown to some. “I was talking to a friend,” says Okocha J. U., a 44-year-old telecommunications gadgets trader. “He said ‘What is Ebola?’ I said, ‘You don’t listen to the news?'” His friend said no. 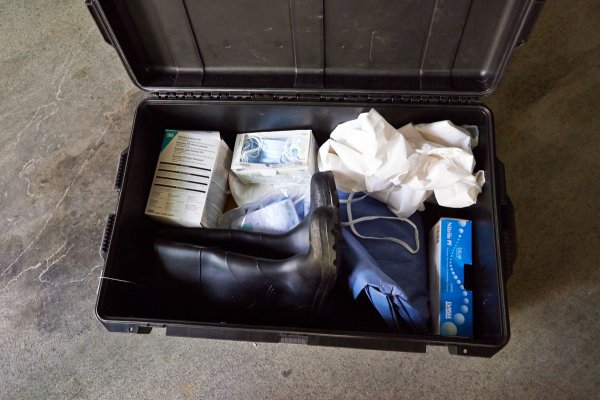 Here's What You Bring Into an Ebola Hot Spot
Next Up: Editor's Pick