Black Jesus: We Have Other Things to Boycott

I had been hearing rumblings for a couple weeks, but Thursday morning I awoke to a full-throttle meltdown among some members of the community with which I most closely identify, that is, Black Christians. Thursday night the new series by Boondocks creator Aaron McGruder premiered on AdultSwim, the Cartoon Network evening lineup of adult-themed cartoon comedy. It’s called Black Jesus, and in the trailer the title character is depicted as a neighborhood brother dressed in church-play biblical garb with no place to lay his head and apparently getting little to no respect despite the fact that he is, as he himself notes, “your Lord and Savior.” It has the potential to be very funny, that is, if you don’t see it as blasphemous.

Let me admit that the name Black Jesus immediately causes me to chuckle because it evokes the memory of an iconic episode of the controversial 1970s comedy Good Times. In the episode burgeoning artist JJ depicts Jesus of Nazareth as Black. What’s funny about that episode is the interplay of religion and nationalism on the one hand and the more pointed reality that the model JJ used for his Christ is a neighborhood character known as Ned the Wino. I’ll confess that I bought the entire first season of the series just so that I could own that particular episode.

By now, you have already figured out that I’m not inclined to get too irate over the mere possibility of blasphemy. In this way, I am unlike a few of my friends and colleagues who are up in arms and calling for a boycott of the series and perhaps of the Cartoon network. Now this is not because I am incapable of indignation. I’m just saving my ire for other things, such as, the carnage in Gaza, food insecurity in my city and every city, and even the nonsense folks preach in pulpits depicting Jesus as a money-hungry capitalist, which by the way is at least as blasphemous as portraying him as a cussing, smoking, homeless dude in the hood.

Today and every day I am most particularly opposing the sexism and misogyny pervasive in Christianity itself, which threatens our Christian witness to the outside world (which the “boycott Black Jesus crew” uses as their principal motivation) and more importantly destroys the very people who most subscribe to and participate in the life of the church, that is women. As I said to my friends, I am continuing my principled boycott of churches, denominations, pastors, and preachers that deny women the opportunity to participate fully in every level of church life and leadership. As a practical matter, this means I am not listening to preachers who do not support the ministry of women in their own churches. It means I am not going to conferences that don’t have women as keynote speakers. I am encouraging women and men who believe in equality to put our money and energy where our mouth is. I’m boycotting.

I know that there are some who think that what we say and think about Jesus is more important than disagreements we might have about women and their proper roles in the church, but in reality what we believe about women tells us a lot about what we believe about God and Christ, too. Jarena Lee put it succinctly in the 19th century as she defended her call to preach when she asked “If the man may preach, because the Saviour died for him, why not the woman? seeing he died for her also. Is he not a whole Saviour, instead of a half one? as those who hold it wrong for a woman to preach, would seem to make it appear?” This is not just a political or social matter; it’s theological too. Women are a part of the body of Christ and made in the image of God.

I don’t know whether I’ll love McGruder’s satirical Jesus or whether I will find myself offended and thinking he has taken things a step too far. I’ll have more to say about that as the show progresses. What I know now is that I am already tired of the ways in which some of the same Black Christians who call for a defense of Jesus against this depiction have little or no energy for the defense of the women, the Black women, who often love and serve their Lord and Savior Jesus Christ the most.

Leslie D. Callahan is the pastor of the St. Paul’s Baptist Church in Philadelphia. 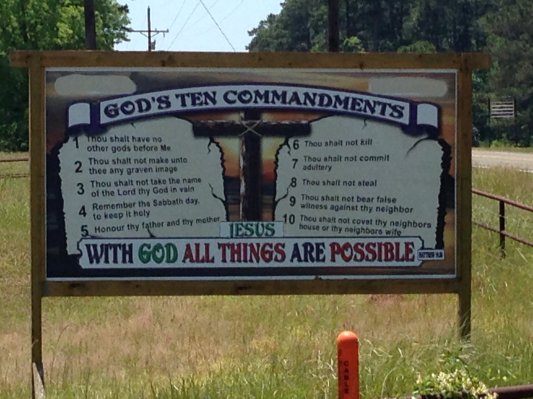 Texas Law: Thou Shalt Not Place 10 Commandments Signs Along Highways
Next Up: Editor's Pick