The bombings came after President Barack Obama opened the door to military action in Iraq to protect the Kurdish-controlled city of Erbil, home to a U.S. consulate and several American advisors, from the advancing militant group Islamic State of Iraq and Syria (ISIS).

Kirby said later on Friday that the second attack happened “shortly after 10 a.m. EDT,” and involved a drone targeting a “terrorist mortar position.” “When [ISIS] fighters returned to the site moments later, the terrorists were attacked again and successfully eliminated,” Kirby said, confirming the first ISIS casualties at the hands of Americans. The third strike, about 80 minutes later, involved four F/A-18s delivering laser-guided bombs on in two bombing runs on “a stationary [ISIS] convoy of seven vehicles and a mortar position near Erbil.”

The decision to strike was made by a U.S. Central Command commander pursuant with Obama’s authorization to strike if necessary to protect Erbil, Kirby said. Obama announced late Thursday he had authorized strikes to protect U.S. personnel and facilities in Iraq in addition to airdrop missions to assist thousands of Iraqi refugees fleeing ISIS, which in recent days has carried out a deadly offensive against Kurdish forces in northern Iraq.

“We intend to stay vigilant, and take action if these terrorist forces threaten our personnel or facilities anywhere in Iraq, including our consulate in Erbil and our embassy in Baghdad,” Obama said Thursday from the White House. But Obama ruled out any U.S. ground forces becoming involved in the battle against ISIS.

“American combat troops will not be returning to fight in Iraq,” he said. Hundreds of American troops are already in Iraq, advising Iraqi security forces and protecting U.S. facilities.

It was not clear Friday whether U.S. advisers assisted in targeting the ISIS artillery piece.

White House Press Secretary Josh Earnest told reporters Friday afternoon “The President has not laid out a specific end date” to his authorization to strike. Earnest added that the administration will evaluate the situation regularly and is not seeking any additional money for Iraq.

House Speaker John Boehner said in a statement Friday that “the President’s authorization of airstrikes is appropriate, but like many Americans, I am dismayed by the ongoing absence of a strategy for countering the grave threat ISIS poses to the region.”

“Vital national interests are at stake, yet the White House has remained disengaged despite warnings from Iraqi leaders, Congress, and even members of its own administration,” Boehner added. “The president needs a long-term strategy – one that defines success as completing our mission, not keeping political promises – and he needs to build the public and congressional support to sustain it.” 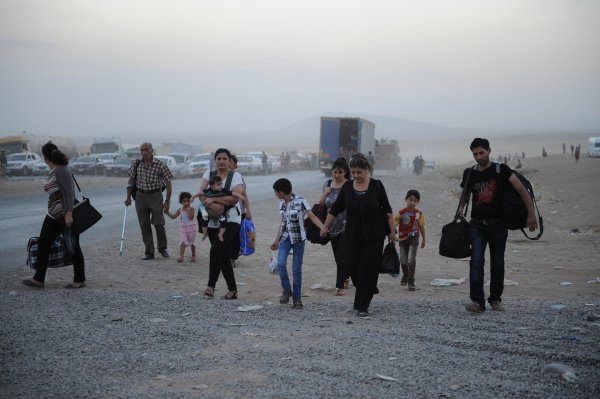