How Obama Evolved on the Issue of 'Genocide' in Iraq

As a first-time presidential candidate in 2007, Barack Obama built his campaign around a U.S. withdrawal from Iraq. Nothing could shake him from his plan to end what he called a “dumb” war. At a New Hampshire campaign stop that July, Obama was asked whether he might delay a pullout if it meant preventing outright genocide in Iraq.

No, Obama said. “[If] that’s the criteria by which we are making decisions on the deployment of U.S. forces, then by that argument you would have 300,000 troops in the Congo right now — where millions have been slaughtered as a consequence of ethnic strife — which we haven’t done.”

Almost exactly seven years later, Obama has ordered military action in Iraq “to prevent a potential act of genocide,” as he put it in his public remarks Thursday night.

For now, that action will consist of airlifting supplies to thousands of members of Iraq’s Yazidi religious sect, trapped atop a mountain and surrounded by the fanatical Sunni militants of the Islamic State of Iraq and greater Syria (ISIS). But it could also include air strikes against those ISIS fighters.

Did Obama flip-flop on a matter as serious as genocide? That would be too glib a conclusion. Seven years after Obama’s comments in New Hampshire, Iraq is a different place. The U.S. Army is long gone, and taking action there doesn’t prolong an ongoing occupation. Nor is Obama ordering anything like a reinvasion of the country. He has authorized — though not yet specifically ordered — only limited strikes against ISIS fighters in the region. “We are not launching a sustained US campaign against [ISIS] here,” a senior Administration official told reporters Thursday night.

What’s more, Obama’s new urgency, while framed mainly in humanitarian terms, is about something broader. Obama is also prepared to use air strikes to prevent Sunni militants from storming the Kurdish capital of Erbil — a vital city to an important regional ally, and one the U.S. would protect even if dozens of U.S. diplomats and military advisers were not stationed there. If Obama decides to strike at ISIS, then, he’ll have strategic and national security reasons, as well as humanitarian ones, to do so.

But even if Obama did act solely to protect the Yazidi, that would be consistent with the quasi doctrine for humanitarian action he described when he ordered air strikes in Libya in March 2011. The Libya intervention may now be remembered mainly for the long NATO air campaign that eventually toppled Muammar Gaddafi. But remember that Obama justified acting not to end Gaddafi’s regime, but to protect the people of Benghazi from impending slaughter — “a massacre that would have reverberated across the region and stained the conscience of the world” — at the hands of Gaddafi forces who had encircled the city. (It is a particularly bitter irony for Obama that Benghazi is now synonymous with tragedy and scandal, and not the rescue of thousands of innocent lives.)

In announcing his Libya action, Obama explained that the U.S. can’t intervene everywhere something awful is happening. But, he argued, the U.S. should intervene in those cases where limited military action is likely to save many lives with low risks:

Mount Sinjar today has much in common with the Benghazi of 2011. The U.S. can act in a limited way to prevent a great atrocity (and, in this case, with the support of the national government — which the senior Obama official says would give any air strikes legitimacy under international law).

Why not Syria? Or for that matter the Democratic Republic of Congo, or the Central African Republic, or anywhere else that innocents are dying every day? Because, Obama would surely say, the nature of those conflicts make limited U.S. intervention with clear and achievable goals impossible.

In his 2007 comments about genocide, Obama at least seemed to imply that, because the U.S. can’t prevent slaughter everywhere, it shouldn’t take humanitarian action anywhere. But as President he has adopted a different point, first in Libya and now in Iraq: Just because we intervene in some places doesn’t mean we have to intervene everywhere.

That doesn’t make for a very tidy doctrine. Nor will it console the miserable people of Syria. But it will bring jubilation to the terrified thousands on Mount Sinjar, for whom salvation is now coming. 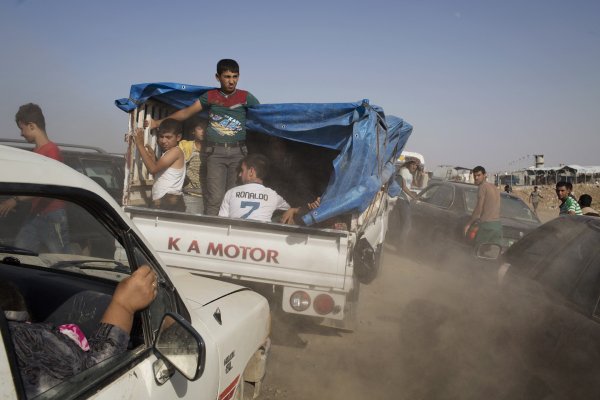