The U.S. State Department has taken steps to seek the prosecution of a members of the President of the Democratic Republic of Congo’s entourage, who were allegedly captured on video Thursday beating a protester in the streets of Washington, D.C.

A video posted on YouTube shows a man in a dark suit kicking the head of a protester as he lays on the ground near a member of D.C.’s Metropolitan Police Department, who appeared to be trying to defuse the situation.

“We are still gathering details on the incident, but are very troubled by reports that protestors were attacked by members of the President’s entourage,” the State Department said in a statement Thursday. “We take the right to freedom of expression very seriously, and violence against peaceful protestors is totally unacceptable.”

The statement went on to commend the efforts of D.C. police for coming to the aide of the protesters. “We have communicated our concern to the delegation from the Democratic Republic of Congo in the strongest possible terms,” the State Department statement continued. “We have requested a waiver of immunity to permit those involved to face prosecution. If it is not granted, we will ask that they leave the United States immediately.”

A spokesman for D.C.’ Metropolitan Police declined to comment, and a spokesman for the U.S. Secret Service said the investigation would be handled by the State Department.

The Democratic Republic of the Congo President Joseph Kabila is visiting Washington, D.C., for an African leader summit at the invitation of President Obama. According to a 2013 State Department human rights report, Kabila was elected in 2011 in an election international observer missions said “lacked credibility.”

“[Non-governmental organizations], including Human Rights Watch, reported security forces killed or arbitrarily detained dozens of citizens prior to the voting,” the report reads. The human rights condition in the country has remained poor since then, despite the appointment by Kabila of a human rights commission.

“Elements of the [state security forces] continued to harass, beat, intimidate, and arbitrarily arrest and detain domestic human rights advocates and domestic NGO workers, particularly when the NGOs reported on or supported victims of abuses by the SSF or reported on the illegal exploitation of natural resources in the East,” the report reads. 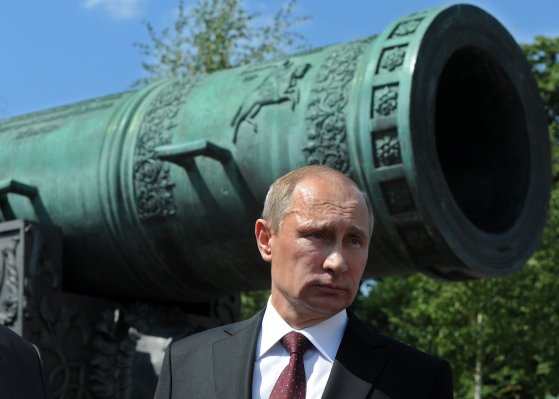 The Upside of Putin's Warmongering
Next Up: Editor's Pick