Hamas Says It Will Continue Fight After Ceasefire

An armed Hamas militant walks through a street in the Shejaiya neighborhood of Gaza City on July 20, 2014.
Wissam Nassar—The New York Times/Redux
By Noah Rayman

Hamas reiterated late Thursday that it plans to continue fighting after a temporary cease-fire ends Friday morning, if its demands are not met.

“The resistance is ready to pay the price and the people are behind the resistance,” Abu Obaida, a spokesman for the military wing of Hamas, said on Hamas-run television, CNN reports. “We are ready for a long war.”

Earlier Thursday, Hamas held a public rally in Gaza City and a top Hamas official, Mushir al-Masri, declared to the crowd that Hamas would continue to fight until the seven-year-old blockade on Gaza by Israel and Egypt is lifted, the Associated Press reports.

A three-day truce mediated by Egypt has largely quieted the three-week-long conflict that killed more than 1,860 Palestinians, mostly civilians, and 64 Israeli soldiers and three civilians in Israel. The truce is scheduled to end Friday at 8 a.m. local time, though representatives of Hamas and other Palestinian factions are in Cairo indirectly negotiating with Israel for a permanent ceasefire.

But hours before the ceasefire is set to end, talks have faltered, with Hamas demanding an end to the blockade and Israel saying the militants must first disarm, a condition Hamas has so far rejected. 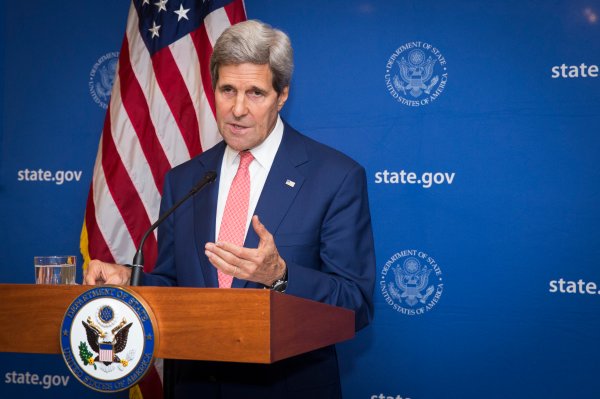 Kerry to Hamas: Release Him
Next Up: Editor's Pick