Outlander Recap: Feminism and Time Travel in a Bodice-Ripping Romance? Sure!

If you have a predilection for epic romances and the super-specific sub-genre that is historical time-travel fiction, then you’re likely to find Outlander to be a sensory feast. Superficially, Starz’s new show is a torrid romance primed for an eager fandom desperate to re-direct their Game of Thrones enthusiasm. But Outlander is more than a sweepingly cinematic bodice ripper: it manages to shroud what fans (myself included) guilt-love about the genre in the much broader themes of history, feminism and free-will.

Though the show begins just after World War II, it largely takes place during 18th century Scotland’s Jacobite uprisings. And while Outlander doesn’t necessarily seek to give viewers a history lesson, the fact that combat nurse Claire Randall’s husband, Frank, is a historian certainly helps. Frank’s incessant musings about his Redcoat ancestors might get yawn-inducing, but they serve as a necessary device to contextualize Claire’s time travel. As she re-lives Frank’s history lessons, Claire’s melancholic voiceover firmly roots the viewer in both worlds, building a bridge between the past and present.

It’s clear from the onset that Claire will spend the majority of Outlander diligently playing the part of an English Rose who eye-sexes thistly Scots, but time travel also becomes a means for Claire to unleash her inner feminist all over a bunch of kilted bros. The creators of Outlander want us to see Claire as a freethinker, and while she is on the surface, she’s also powerless against the romance genre’s inherent constraints against true feminism. Yes, she’s smarter than her male captors and she doesn’t want to be “saved,” but she also acquiesces to the genre’s stipulation that she must be — no matter how resilient a modern-day woman she is. With that in mind, let’s dive sporran-first into Outlander‘s premiere.

Outlander introduces us to Claire and Frank as they celebrate their post-war reunion with a romantic trip to the Scottish Highlands, which — thanks to this show — will now be the go-to setting for fan-fic writers the world over. Claire spends much of the episode trying to mend her war-torn marriage to Frank, but while she seems content enough with her life, there’s clearly something lacking in their relationship.

Claire remained faithful throughout her time apart from Frank during the war, but his willingness to forgive any possible dalliances should be kept in mind throughout Outlander‘s freshman season. Does Claire’s eye wander because she’s asserting the right to explore her sexuality Scot-style, or because her husband gives her permission to do so? Either way, Claire and Frank spend almost all their time having sex in derelict castle cellars and creaky hotel rooms, but Claire — like Heathcliff and Cathy before her — clearly needs to unbridle her passions all over some moors, ASAP. That’s a problem that can only be solved by time travel!

Since something is wanting in her married life, Claire spends much of her second honeymoon frolicking in the ferns of Scotland and having dusty flashbacks to her past. But then Samhain (aka Halloween) strikes, a holiday that denizens of The Highlands celebrate by pouring blood on their door frames and being macabre. Of course, Samhain also happens to be the day that Scotland’s ghost population emerges from the indistinct twilight, and Frank runs into a particularly perverted phantom on his way home, whom he catches peeping at Claire through the window. This is the first of many supernatural elements in Outlander‘s premiere, and it doesn’t feel forced, despite the first half of the episode being rooted in the business of everyday life. What’s unclear is whether there’s something innate in Claire that’s attracting the paranormal (her palm reading certainly implies as much), or whether she’s simply found herself hanging with the wrong gamboling Druids at the wrong time. (It happens to the best of us.)

In Which Claire Experiences The 1940s Version of Throwback Thursday

After some X-rated intimacy that capitalizes on Starz’s clothing-optional policy, Claire and Frank get up early and visit Craigh na Dun, an ancient stone circle that becomes a literal touchstone for Claire’s thematic journey. Along with Claire and Frank (who somehow manage not to have sex in the ferns), we witness what has to be the best slow-motion Druid dancing scene in the history of television, complete with accompanying chanting and Celtic music. It was basically like watching a vintage Kate Bush music video, with a little Mists of Avalon thrown in for good measure. How can we blame Claire for paying Craigh na Dun another visit? Only this time, she makes the mistake of touching a rock, and promptly gets transported to the 18th century.

Apparently the 18th century Jacobite rebellions were a much more visually vibrant time than the 20th, because Claire leaves the muted tones of 1940s Scotland and wakes up in an Instagram filter. She immediately starts panic-frolicking through the grass until happening upon Frank’s doppleganger ancestor, Redcoat captain Black Jack Randall, who wastes no time trying to rape her. Luckily, Claire’s rescued by a band of kilt-wearing Scotsmen, and sets to relocating the shoulder of the hunkiest clansman, Jamie Fraser, who drops this classic pick-up line: “I’ll get me plaid loose to cover ye.” (Heard that one before.) After proving her worth, Claire puts Frank’s history lessons to use by alerting her captors of a Redcoat ambush, ultimately saving their lives.

Claire’s role as a savior certainly bolsters her unspoken identity as a feminist, but she’s not exactly free of the patriarchy, no matter what year it is. And considering that the 20th century should give her greater opportunity to be a liberated woman, it’s all the more noteworthy that her true feminist leanings surface in a world where she’s threatened with rape and casually called a whore. Claire will likely spend the remainder of Outlander navigating her new role as a clanswoman — and while she does make a failed attempt to flee her captors, by premiere’s end, our plucky heroine is almost as entrenched in her new life as we are. And I’m already cueing up my DVR for next week’s episode and hand-sewing myself a celebratory Druid costume. 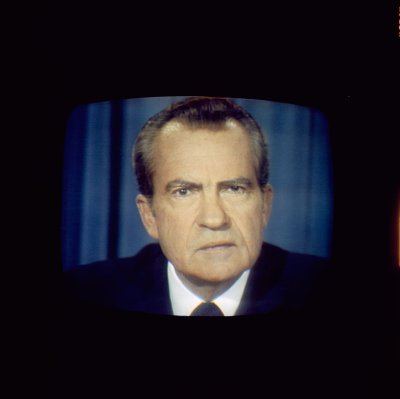 Cranky Guy: Nixon's Still the One
Next Up: Editor's Pick