Earthquake Hits Hawaii as it Braces for Two Hurricanes

In this handout provided by the National Oceanic and Atmospheric Administration (NOAA) from the GOES-East satellite, four separate weather system (L-R) Halong, Genevieve, Iselle, and Julio are tracked in the Pacific Ocean off the west coast of the United States
Getty Images
By Laura Stampler

There were no reports of damage yet, Hawaii County Civil Defense Director Darryl Oliveira told the Associated Press, and small quakes like this are “not uncommon.”

“We felt a pretty good shake,” Joanna Cameron, owner of the Kohala Club Hotel, told TIME of the tremor at 6:24 a.m. local time. Cameron’s hotel is located close to the epicenter, estimated 7 miles from Waimea. She plans to keep the hotel open throughout the storm despite numerous cancellations and the closures of nearby schools and businesses.

“We have an earthquake this morning,” she added. “Now the sun is coming out and we’ll have a hurricane at 4 p.m. No one is enjoying this.”

Hurricane Iselle is expected to strike the Big Island on Thursday night, followed by Hurricane Julio. Hawaii hasn’t been directly hit by a hurricane in 22 years and, according to ABC meteorologists, this will be the first to ever impact the Big Island. 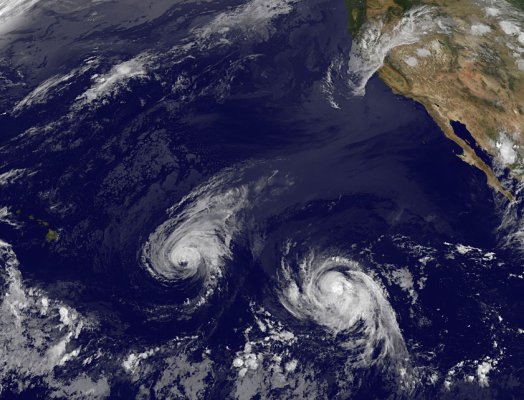 Hawaii Braces for Twin Hurricanes
Next Up: Editor's Pick