First Date Conversation: 5 Things Research Says You Should Talk About

First date conversation can be awkward. What do you talk about? How can you come across well?

Via Quirkology: How We Discover the Big Truths in Small Things.

When talking about movies, less than 9 percent of the pairs wanted to meet up again, compared to 18 percent when participants spoke about the top topic—travel… the conversations about travel tended to revolve around great holidays and dream destinations, and that makes people feel good and so appear more attractive to one another.

2) It’s Not Just What You Talk About, It’s How You Talk

Add to what they say and bounce the ball back.

This is how to have smooth first date conversation.

Avoid extremes in autonomy. Don’t dominate, but don’t be a non-contributor either.

The trick, according to Finkel, Eastwick, and Saigal, is to avoid extremes in autonomy. Accept your date’s pass, redirect it slightly, and then return the ball— all with warmth and genuine interest in his or her responses. This acceptance and redirection is the push and pull that creates smoothness.

Via Sam Gosling’s book, Snoop: What Your Stuff Says About You:

Arthur Aron, a psychologist at the State University of New York at Stony Brook, is interested in how people form romantic relationships, and he’s come up with an ingenious way of taking men and women who have never met before and making them feel close to one another. Given that he has just an hour or so to create the intimacy levels that typically take weeks, months, or years to form, he accelerated the getting-to-know-you process through a set of thirty-six questions crafted to take the participants rapidly from level one in McAdams’s system to level two.

But how effective can this be, really?

In under an hour it can create a connection stronger than a lifelong friendship.

What he found was striking. The intensity of the dialogue partners’ bond at the end of the forty-five-minute vulnerability interaction was rated as closer than the closest relationship in the lives of 30 percent of similar students. In other words, the instant connections were more powerful than many long-term, even lifelong relationships.

4) Choose Controversial Over Dull Every Time

If all else fails, talk about abortions and STD’s.

Yeah, you heard me.

We limited the type of discussions that online daters could engage in by eliminating their ability to ask anything that they wanted and giving them a preset list of questions and allowing them to ask only these questions. The questions we chose had nothing to do with the weather and how many brothers and sisters they have, and instead all the questions were interesting and personally revealing (ie., “how many romantic partners did you have?”, “When was your last breakup?”, “Do you have any STDs?”, “Have you ever broken someone’s heart?”, “How do you feel about abortion?”)… Instead of talking about the World Cup or their favorite desserts, they shared their innermost fears or told the story of losing their virginity. Everyone, both sender and replier, was happier with the interaction…What we learned from this little experiment is that when people are free to choose what type of discussions they want to have, they often gravitate toward an equilibrium that is easy to maintain but one that no one really enjoys or benefits from.

5) Looking To Get Lucky?

Dating site OkCupid found one question that was the single best predictor of whether men or women would have sex on the first date:

Among all our casual topics, whether someone likes the taste of beer is the single best predictor of if he or she has sex on the first date… No matter their gender or orientation, beer-lovers are 60% more likely to be okay with sleeping with someone they’ve just met. Sadly, this is the only question with a meaningful correlation for women.

A spontaneous conversation about sexual assault on social media led to more encouragement than public shaming.

How To Be A Good Kisser – 10 Tips From Scientific Research

How To Make Someone Fall In Love With You

Science Of Sex: 4 Harsh Truths About Dating And Mating

5 Secrets That Will Help You Master Conversation Skills

Read next: Here’s How to Strike Up a Conversation With Almost Anyone 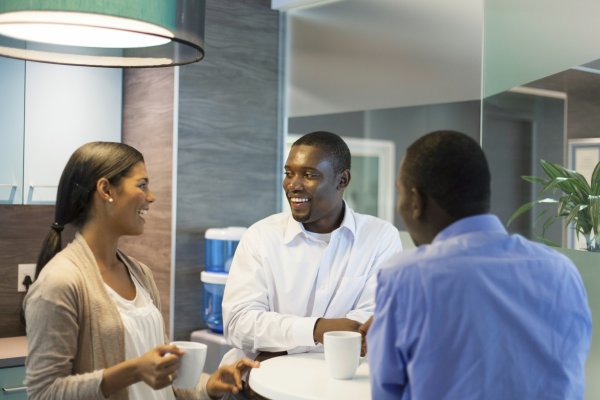 Culture Change: How to Improve Your Workplace Culture
Next Up: Editor's Pick