The two inset images show before-and-after images captured by NASA’s Hubble Space Telescope of Supernova 2012Z in the spiral galaxy NGC 1309. The white X at the top of the main image marks the location of the supernova in the galaxy.
NASA
By Alexis Hauk

Less like The Walking Dead and more like The Floating Dead: Astronomers believe they have identified the remnants left from an exploded white dwarf, otherwise known as a “zombie star,” about 110 million light-years from Earth.

Images like this one, shot with NASA’s Hubble Telescope, reveal the onset and aftermath of a “weaker” supernova, which happens when something changes in the core of a star and sets off a nuclear reaction.

The discovery of one of these less robust supernovas is a rare find in the world of interstellar study, and can help “to measure vast cosmic distances and the expansion of the universe,” said Rutgers University scientist Saurabh Jha, who’s part of the team that put together findings on the zombie star for Thursday’s edition of Nature. 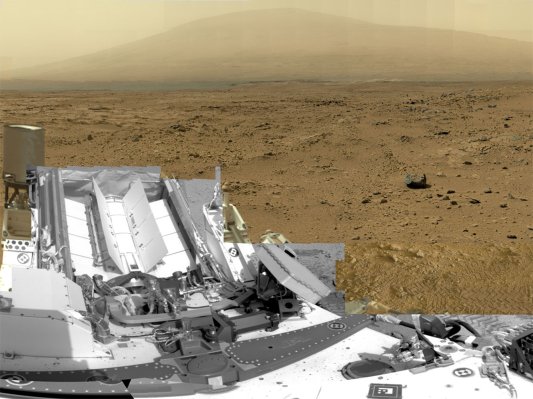 Photos from the Curiosity Rover's First 2 Incredible Years on Mars
Next Up: Editor's Pick