Cities Get Their Goats to Be Newest Employees

American cities big and small are turning to an unlikely new kind of employee in hopes of saving money and improving local streets and parks.

Last month, Boston became the latest city to introduce goats to its workforce as six of the cloven cud-chewers began making a meal of poison ivy and weeds, opening up the latest frontier in urban goatscaping, which has been spreading around the country like so many weeds that the goats have been hired to destroy.

“They’re eating almost everything but the ferns,” says Boston Parks and Recreation Department spokesperson Ryan Woods about Cole, Chester, Christopher, Cassandra, Dalia and Delia—Alpine and LaMancha goats hired to munch through all sorts of unwanted vegetation that have made parts of an area park virtually impassable for humans. The rate for the goat sextet is $2,800 for the eight-week project, one normally reserved for Hazmat suit-wearing humans. It’s being funded through the non-profit Southwest Boston Community Development Corporation, and the group’s executive director Mat Thall estimates that the job performed by regular workers could cost upwards of $8,000.

Goats have become an increasingly cost-effective and eco-friendly way for cities, parks and natural resources departments, and private property owners to clear areas of unwanted vegetation. Outside of Philadelphia, Haverford College has hired goats from the Maryland-based goat purveyor Eco-Goats to eat invasive vines and shrubs. A Madison, Wisconsin-based company called The Green Goats has recently rented the animals out to suburban parks around Chicago. In Victoria, Texas, goats have been unleashed to clear brush in the town’s Riverside Park. Thirty goats were dispatched in a Pittsburgh park to eat weeds and invasive vines, and more than 100 goats were recently used to consume blackberry bushes behind a mall in Lynnwood, Wash.

“If they’re managed properly, goats are a great tool to get in places that are almost impossible to get into with chemicals,” says Ray Holes, who’s been renting out goats in western U.S. towns and cities for close to two decades and is widely known as the Goat King. “And on the whole, it’s probably cheaper, too.”

Goats have a knack for eating all the vegetation humans don’t want around while leaving the good stuff, like grasses, and they can often be trained to acquire a palette for certain invasive species. Goats can eat about 4% of their body weight a day by gobbling up a number of woody plants that are anathema to humans, like nettles, poison ivy, buckthorn and wild parsnip.

While there are dozens of goat-renting companies throughout the U.S., Holes’ is the single biggest purveyor of goats in the country and is considered the Goat King for a very good reason—he owns 9,000 of them that are almost continuously on the job throughout California, Oregon, Washington, Idaho and Montana.

Holes charges anywhere from 75 cents to $3 per goat per day depending on where they work and the kind of munching they’re required to do. And he’s increasingly taken on inner city jobs throughout the the western U.S. In the Los Angeles neighborhood of Sun Valley, for example, Holes recently brought in goats to clear areas near hiking and biking trails.

But the most common job for goats is often creating fire breaks—areas made barren of any natural flammable materials. We Rent Goats, a smaller Wilder, Idaho-based business that does exactly what its name says, often works with power companies around the state in clearing those areas. Co-owner Lynda Linquist says 100 of her goats can eat through an acre a day, and they’re almost always a hit.

“Anytime we bring goats in, usually people are thrilled,” Linquist says. “Some will throw huge parties that are tented and catered.”

Linquist, along with her husband Tim, currently rent out 700 goats, mostly to cities that often need help with just a few acres at a time. (We Rent Goats charges $375 an acre.) The goats are generally kept in place by temporary electric fences. But they’re not goat-proof. In Boise, Idaho, about 500 of Linquist’s animals recently got loose.

“They’re goofy gals,” Linquist says. “They’ve busted out of fences. Sometimes they’ll push each other down and steal what the other one’s eating. Sometimes they’ll just go stand in the middle of the road. You’ve got to be thinking one step ahead of them.”

And they’re not always a welcome sight. In June, a hedge fund manager brought in 20 goats to eat through overgrown weeds on abandoned lots in Detroit, but the animals were kicked out two days later by public officials. (It’s illegal to have farm animals within Detroit’s limits.)

And there are at least a handful of landscapers upset by the growing goatscaping economy, as highlighted by The Colbert Report.

Holes, the Goat King, says about half his clients these days are public entities. And he says his business would be even bigger if it wasn’t so difficult finding managers who not only knew how to wrangle hundreds of goats but were also willing to be on the road for weeks or months at a time.

“We have people calling us constantly wanting us to bring our goats in,” Holes says. “But you have to be willing to be away from home. The goats don’t care your kids are having a birthday.” 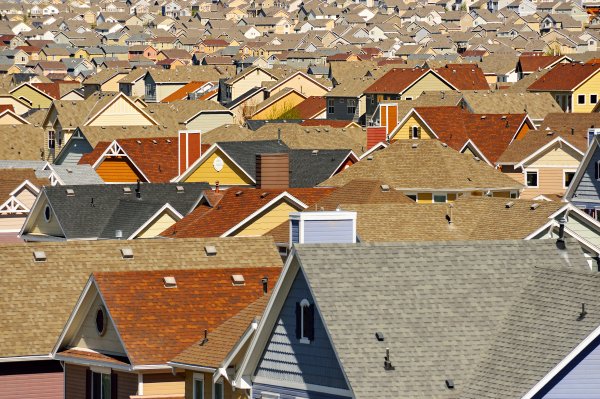 The Rise of Suburban Poverty in America
Next Up: Editor's Pick