The Sproutling Baby Monitor straps onto your baby's ankle and is machine washable.
By Sarah Begley

At first glance, the Sproutling Baby Monitor looks a little like a high-tech house-arrest anklet. It’s been dubbed “Fitbit for your baby” and “Nest for your nursery,” and it promises to do so many things that it begs the question: Do parents really need to monitor 16 variables and vitals every time they put the baby down for a nap? Is this helicopter parenting taken to a technology-enabled extreme?

Sproutling intends to be the opposite—a rare wearable technology that makes life simpler, not more complicated, according to its co-founder and CEO Chris Bruce, who got the idea for Sproutling when his second child was born. His first baby cried a lot, but when he found himself in the seemingly enviable position of having a quiet infant in the house, he found himself incessantly checking the baby monitor to see if she was still breathing. (Even though it’s rare, the mere thought of SIDS—Sudden Infant Death Syndrome—is enough to cause any new parent a lot of anxiety.)

“I’d get nervous,” he says. “I tried to listen at the door and I didn’t want to wake her up… So I sneak in, I try and listen if she’s breathing, and I end up putting my hand on her and waking her up.”

With Sproutling, Bruce says, new parents won’t have to work themselves into a frenzy like this. The monitor straps onto the baby’s ankle and communicates with a nearby base and a mobile app. Together, they track heartbeat, body temperature, the noise level in the room, the baby’s motion and other factors that indicate how well a baby is sleeping. Over time, it also learns the baby’s patterns and behaviors and can make predictions about when the infant will wake up, for instance, and whether they’ll be fussy or happy when they do.

This information shows up in a simple format on mom and dad’s smart phones, displaying a green background if all’s well and a red background if something is wrong—for instance, if the baby has rolled on its stomach, or has a fever or low heart-rate. A yellow screen means the little one has managed to kick off the sensor.

The benefit of the app’s simplicity, says co-founder Mathew Spolin, is that it doesn’t overwhelm parents with the abundant information it’s gathering—it only tells them if there’s really a problem. “For a new parent, they’re not going to know if 130 beats per minute is better than 90, and without the context to really interpret vitals data, it’s just going to create more anxiety and more fear.”

So instead, the message is simple. For instance, a red screen: “Austin: Unusually High Temperature.” Or a green screen, with a pulsing dot to show the heartbeat: “Austin is sleeping. He will wake up in about 45 minutes.” The anklet can be dropped into the base to be charged wirelessly—so the band doesn’t have any charging contacts or pins that could scrape a baby’s skin. Since there are no current safety guidelines for infant wearables, Sproutling teamed up with consumer-testing company Bureau Veritas to take relevant standards from textiles and small-part toys and create a list of suggestions they’ve presented to the Juvenile Products Manufacturers Association.

Sproutling is not the first wearable tech for babies—Mimo, a turtle-shaped monitor that snaps onto special onesies, is already available for $199.99, and more wearables are in development from Owlet, Sensible Baby and others. But the Sproutling founders say their product collects more data than its competitors, learns from the baby’s past behavior, and displays it in a less stress-inducing manner.

“We’re not about presenting that wall of data,” says Spolin. “We show you an animation so you can look at this at four in the morning without glasses or contacts and know, it’s green, everything’s good.”

The Sproutling launches its pre-ordering campaign Thursday, and after a few months of assessing demand, the first round will ship. Early-bird pricing is $249; later, that will increase to $299. And Sproutling hopes this is just the beginning: they’re mum on specifics but they say have four new products planned for the future, each targeted for a major stage of development in a child’s life.

If they’re right that high-tech tools can keep parents calm instead of adding to the stress of parenting, Sproutling could have a winner on its hands. 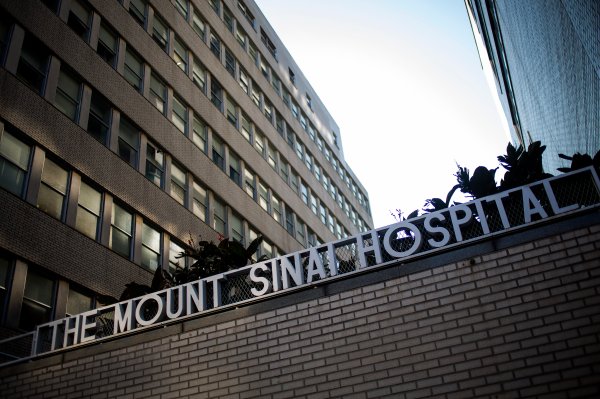 CDC: New York Patient Does Not Have Ebola Virus
Next Up: Editor's Pick