A pro-Russian guards the road as Australian, Malaysian and Dutch investigators prepare to examine the area of the downed Malaysia Airlines Flight 17, near the village of Rossipne, Donetsk region, eastern Ukraine on August 5, 2014.
AP
By Simon Shuster / Soledar

The Dutch-led recovery team for Malaysia Airlines Flight 17 got off their bus in single file, neatly stacked their body armor on the ground and lined up for roll call. They looked exhausted, dusty and half-starved after another day among the wreckage of the airliner that was shot down on July 17. But at least the day’s search had gone well. They had found some more personal belongings of the nearly 300 people killed in the disaster, as well as some human remains, which, in the words of one of the forensics experts, “could be mistaken for pieces of wood” after lying for more than two weeks in the fields of eastern Ukraine.

No one knows how much longer it will take to bring all of the victims home. Only on Aug. 3, two and a half weeks after the crash, was the recovery mission able to set up its base of operations in the small mining town of Soledar, just outside the war zone that surrounds the crash site. And just three days later, the Dutch Prime Minister suspended the search because of worsening violence nearby, saying it made no sense to continue under the current conditions.

Those conditions indeed defied sense. About 100 policemen and investigators from Malaysia, Australia and the Netherlands — whose citizens made up the vast majority of the passengers on that plane — were dispatched to the site, and quickly set up a temporary base with sleeping cots and a canteen, working with meticulous order and control. But the crash site itself was a different story. “I’m afraid over there we have very little control,” Cornelis Kuijs, the Dutch police colonel who is leading the mission, tells TIME in Soledar. “We have no freedom of movement whatsoever.”

That is because the crash site, spanning an area of several square miles, remains in the hands of the same pro-Russian separatist militias who are widely suspected of shooting down the plane in the first place. This put a huge moral and practical strain on the mission and the investigators. Every evening, their negotiators are forced to hash out a new deal with the rebel fighters on what chunk of the crash site they can access the following day. “Wherever we are, they are right there. They are watching over us,” says Abu Bakar Khalid, chief of police for all of Malaysia, who came personally to oversee his country’s delegation to the recovery effort. “They don’t trust us,” he tells TIME of the rebel fighters. “And it’s hard for us to trust them.”

That goes double for the dozens of police officers involved in the mission. Though their role is to protect the forensics experts and investigators working at the crash site, the policemen were not allowed to bring any weapons with them, as that would have jeopardized negotiations with the rebels, says Kuijs. So the officers were forced to stand unarmed among the prime suspects in the murder of their countrymen, feigning an air of neutrality. “Yeah, of course, sometimes you have thoughts of doing something to them,” says one of the Dutch policemen, who asked not to be named, as he is not authorized to speak to the media. “But you have to focus on the mission.”

The mission was and is simple: bring home the remains of the victims, dozens of whom are still unaccounted for and presumed to be scattered among fields of wreckage and debris. Secondary to that objective is the aim of recovering the possessions of the victims, and on that front the team made a breakthrough on Aug. 3, when they were able to access an entire train car full of the victims’ belongings that had been gathered by the locals and stored at a depot in the town of Torez. For weeks the recovery team was aware of its location and contents, but the intense fighting around the area prevented them from getting near it. “We knew it was standing there, so we were very anxious,” says Kuijs. As the fighting briefly receded from the area that day, “we were able to negotiate on the spot that we could go to the train and recover what was in there,” he says. “That was tremendous.”

Much of the crash site, however, remains dangerously close to the fighting between the Ukrainian military and the rebel militias, and as the search crews comb through the fields, they can usually hear the artillery fire around them. “It’s very close,” says Khalid. “It’s very powerful.”

And it doesn’t seem to be doing much good. For a few hours on Aug. 1, it seemed as though the Ukrainian military had finally broken through the rebel defenses and reached the crash site. The army’s press officers gathered a group of reporters that morning, including this correspondent, to drive to the village of Grabovo, where large chunks of the fuselage and numerous bodies had fallen.

But when the convoy of reporters came within about 15 km of the village, the soldiers said they had spoken too soon. “They left a lot of surprises for us,” said Sergeant Alexei Frolov, an explosives expert who had just finished defusing a massive roadside bomb on the highway leading to the crash site. It included a sack of TNT weighing about 50 kg. Farther along there were others, the sergeant said, and the village of Grabovo was still in rebel control. The following day a group of reporters saw what looked to be pieces of the Malaysian airliner piled up at one of the rebel checkpoints near Grabovo, apparently being used to reinforce their barricades.

As the fighting intensified, Kuijs was busy last week preparing the recovery mission’s base in Soledar, which is about as close as he could bring his team without putting them at risk of a stray mortar falling on their camp. Built around one of the biggest salt mines in Europe — the town’s name translates from Russian as “the gift of salt” — Soledar does not exactly offer the recovery team all the comforts of home. With a population of about 12,000, the town has neither a restaurant nor a hotel, so the mission has been forced to house most of its workers in a crumbling old sanatorium or on the floor of the local House of Culture, whose facade is adorned with a crest of the Soviet hammer and sickle. “There is no room for cultural differences here,” says Khalid. “We work together, eat together, sleep together.”

If anything, the culture shock has been most pronounced among the locals, who have never seen so many foreigners descend on their town at once. “I’ve never even seen a Malaysian,” says Alyona Morozova, who was out for a walk near the House of Culture with her 1-year-old daughter Evgeniya, as the recovery mission came back from their search on Aug. 4. “It’s like they came from outer space.”

Kuijs, a pair of red-rimmed spectacles perched on the tip of his nose, was meanwhile greeting the returning convoy, which included armored ambulances and vans with labels that read, “MH17 Recovery.” Slowly the investigators tried to shake off the weight of everything they’d seen and found that day. Some went up to the gymnasium in the House of Culture for a rest on one of the army cots. Others did some laundry in a bucket with a bar of soap.

The atmosphere was solemn but not depressed, and here at least, if not at the crash site, the summer weather felt like a blessing. “I haven’t heard anyone complain,” said Kuijs. “Everybody is just so dedicated and so …” He took a heavy pause. “Happy is not the right word. But proud. Proud that we are bringing back these remains and bringing back this property. That is the promise we made to the families.” As for when they might finish their mission, the commander said, “it would take a crystal ball” to guess that, mostly because their work could be disrupted at any time. “Depending on the fighting they could close the door, and it will be the end for us. So I have no clue,” he said. “We just do our utmost to accomplish what we can, because the timeframe will be limited. I’m sure of that.”

Kuijs could not have known just how limited that window would be. On Aug. 6, only days after the search team spoke to TIME, Dutch Prime Minister Mark Rutte temporarily suspended the mission as fighting nearby worsened. The Premier promised only that the search for remains would continue when Ukraine was “more stable.” 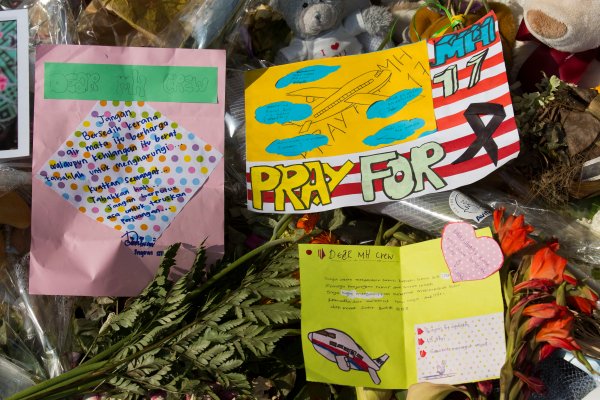