The World Health Organization is convening a panel of medical ethicists next week to discuss whether experimental vaccines and drugs that have not been approved or tested in humans should be used to treat the Ebola outbreak in West Africa that has claimed over 800 lives.

The WHO said the recent news that two Americans with Ebola evacuated from West Africa were given an experimental drug called ZMapp has spurred discussion over whether medicine not yet proven to work could be used in limited amounts. Studies in adults are needed before drugs can obtain approval, but in dire circumstances, they can be provided for limited use. The panel will also discuss who would get the drugs, should use be deemed appropriate.

“We are in an unusual situation in this outbreak. We have a disease with a high fatality rate without any proven treatment or vaccine,” Dr. Marie-Paule Kieny, Assistant Director-General at WHO, said in a statement. “We need to ask the medical ethicists to give us guidance on what the responsible thing to do is.”

Though there is no known cure or vaccine, there are a few drugs currently under experimentation that look promising. For example, National Institutes of Health immunologist Dr. Anthony Fauci is working on a vaccine to prevent Ebola that so far is completely effective in monkeys. Still, giving the drugs to the wrong people could not only cause more harm or safety concerns, but push back research. “My concern is that if you give the treatment to people in late stage disease, and if the person dies, then everybody is going to blame whatever was given,” Thomas Geisbert, professor of microbiology and immunology at the University of Texas Medical Branch at Galveston told TIME this week. “If the person survives, you may never know if the product worked because it was somebody who was going to survive anyway, without the drug.”

But demand is unlikely to subside, especially if the experimental drug given to the American patients proves effective.”The use of it in humans was unanticipated, so we are now trying to scale up as quickly as we can,” Mapp Biopharmaceutical president Larry Zeitlin told TIME.

WHO did not respond to requests for comment on when a final decision will be made. 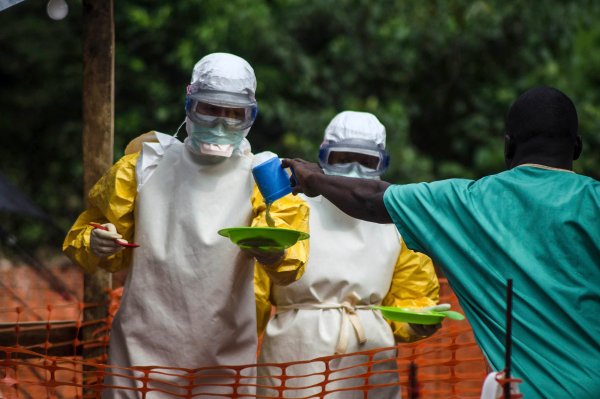 Meet the Bots That Knew Ebola Was Coming
Next Up: Editor's Pick