12 Ebola Questions You're Wondering About

In case you’ve missed it, the deadliest Ebola outbreak is spreading in Western Africa, taking at least 900 lives so far. The U.S. Centers for Disease Control and Prevention (CDC) is sending 50 infectious disease specialists to the region in order to help quell the outbreak and provide much-needed resources and expertise. As the outbreak worsens, confusion—and panic—has grown.

To sort fact from doomsday fiction, we consulted current and former CDC members and infectious disease experts including Dr. Ron Behrens, of the London School of Hygiene & Tropical Medicine, and Amesh Adalija an infectious disease physician at the University of Pittsburgh Medical Center.

Where does the name “Ebola” come from?

The virus is named after the Ebola River in what is now the Democratic Republic of the Congo. That’s where the virus was discovered in 1976.

If there’s no vaccine or cure, what are doctors doing to treat Ebola patients?

For now, all doctors can do is treat the symptoms and provide supportive care like monitoring heart rate, blood pressure, and breathing while making sure the patients’ fluids are replenished. Sometimes patients are given antibiotics to treat other possible infections. The hope is to sustain the patient through the infection so their immune system can eventually clear the virus. This is harder to achieve in rural health systems in West Africa that are tasked with treating thousands of patients with insufficient resources.

How do some people recover if there’s no cure?

When the body is infected with a virus, it starts creating antibodies to attack it. The people who survive Ebola—or any virus—have created enough antibodies to neutralize it.

I hear you can only get Ebola through direct content with an infected person’s bodily fluids. Does that mean you need to have an open wound or something?

A wound, sure, but the skin can also have microabrasions you can’t see. Additionally, the virus can get into your body through your eyes and mouth if those areas come into contact with something that contains the bodily fluids of an infected person. That’s why health care workers are supposed to keep themselves completely covered while treating patients. The doctors and health care workers in West Africa are working in rural clinics, where the proper protections are scarce. Infected people may be quarantined with other people infected with the disease, making this kind of contact easier.

Since the virus has a two-to-21-day incubation period, can you get the disease from someone who doesn’t have symptoms?

No. The CDC says people who are not symptomatic are not contagious.

Can Ebola spread through sweat?

Yes, the virus can be present in sweat.

Sure, though sex while infected with Ebola seems unlikely. In past Ebola outbreaks, men who survived the disease were told to refrain from sex or use condoms for about three months after recovery because the virus can be present in semen.

Why is there no vaccine or drug for Ebola?

There are several promising drugs and vaccines in development, but since Ebola is less common—and research about it is not well funded—there is no drug or vaccine that has been approved for use in humans. One experimental serum was used by the two American patients, but there’s not enough for widespread use yet. Many of the other drugs and vaccines have not yet been tested in humans. The WHO is meeting next week to discuss whether experimental treatments should be used during this outbreak.

What does the virus do to the human body?

The virus is systemic. That means it can move to and affect every part of the body causing direct damage to organs as well as internal bleeding. This causes shock, which drops a person’s blood pressure and causes multisystem organ failure.

How were the two American patients brought to the U.S. safely?

The two Americans were evacuated out of Liberia in special planes equipped with the necessary medical equipment to sustain their health and keep them isolated. After the plane landed, they were taken in a similarly equipped ambulance to Emory University Hospital, which has a specially built isolation unit meant to treat patients who have been exposed to severe infectious diseases. For more details on their travel as well as photos, read TIME’s coverage of the travel here.

Why is it spreading so fast in Africa?

CDC director Dr. Tom Frieden has said that the health systems in Guinea, Sierra Leone and Liberia are severely lacking in resources, and health care workers may not have access to adequate protective clothing. There’s also been some pushback against healthcare workers. Since Guinea, Sierra Leone and Liberia share a border, it’s easier for people to move from one country to another, and increasing the risk for disease spread.

How did the virus start anyway?

The natural reservoir for Ebola remains unknown, but researchers hypothesize that the first infected in an outbreak likely becomes infected through contact with an infected animal. Bats are thought to be a carrier of the virus.

I am terrified about an outbreak in the U.S. Am I overreacting?

Yes. The outbreak is happening in rural areas of developing countries. There’s a slim chance someone with Ebola could travel to the United States. If that happens, experts say that any hospital in the U.S. would be able to successfully isolate them. The CDC says there will not be a spread of the virus akin to what we have seen in Guinea, Sierra Leone and Liberia because we have many ways to isolate a patient and treat their symptoms. 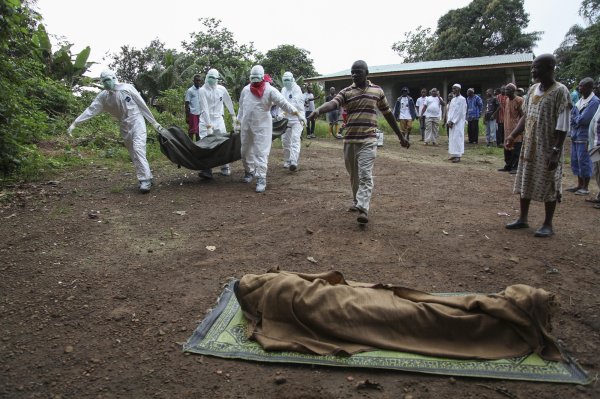 Ebola Spreads in Liberia
Next Up: Editor's Pick