Inside the Secrets of Hollywood's Calendar

What do you call a thong-clad scientist paired with a chainsaw-toting cheerleader? Answer: the perfect summer movie.

It’s no secret that the movies follow an unofficial calendar: Summer is for action heroes and explosions, while dark themes and delicate plots visit in the winter, readying for the Oscars. But what about some of the less familiar patterns that popular Hollywood seasons? To study the secrets of the cinema calendar, TIME gathered data on the 8,298 movies in IMDB that made at least $100,000 in inflation-adjusted dollars, all the way back to 1913. By correlating the keywords for each movie to the month that it was released, we were able to find highly seasonal topics for each month of the year.

For all the highs and lows of the Hollywood calendar, check out this chart. 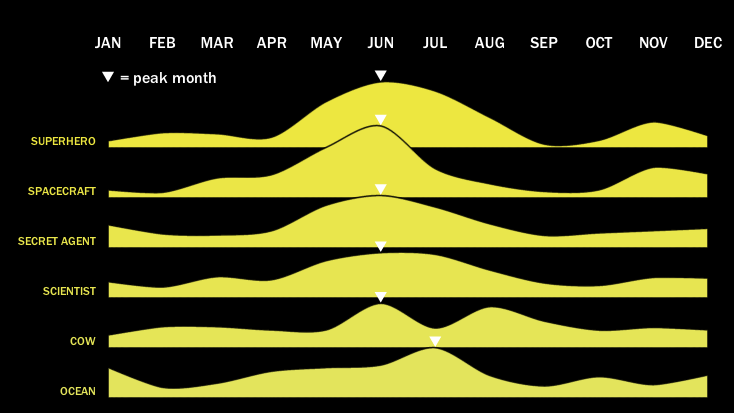 Some of the more surprising highlights: People are saddest in January. The tag “melancholy” is most popular in the beginning of the year. See “Sideways” and “The Hours.” February is a great month for World War II. “Nazis” too. Drug lords come out in the summer. August to be specific. In fact, the second-highest grossing movie of the moment is Lucy, in which a woman (Scarlet Johansson) works as a mule for a Korean drug kingpin.December is lethal for main characters. That’s when they die most often. See “Titanic.”

The keywords on IMDB are submitted by users so the data is not perfectly consistent, but across thousands of movies one sees clear and sensible pattern. Each keyword was measured according to the total number of movies it appeared in each month of the calendar year, regardless of which year the movie appeared. These figures where then converted to percentages according to the keyword’s total volume. Since movies come out in different volumes in different months–October is a particularly popular type to release a film regardless of topic, for example–the data was then normalized according to the total number of films released in a given month.

How the World Sees America Now
Next Up: Editor's Pick