Kurdistan Isn't About to Leave Iraq Amid ISIS Fighting

The Iraqi Kurds’ recent territorial gains have sparked widespread speculation that they may soon be able to realize the Kurdish dream of statehood. Over the past few weeks, excited Kurds around the world have rallied in support of independence. But secession is a difficult and costly course.

Many Kurds long for an independent Kurdistan, but only in Iraq has the dream come close. Since the fall of Saddam Hussein, Iraqi Kurds have built a semi-autonomous region with their own regional government (the Kurdistan Regional Government, KRG), armed forces (peshmerga) and an oil-dependent economy that has attracted big foreign investors. But the KRG is still bound to Iraq, and has been restrained by its disputes with Baghdad over territory and oil exports.

The Kurds appeared to gain an edge on some of those disputes when the Islamic State of Iraq and greater Syria (ISIS) took over Mosul last June, pushing the Iraqi army to abandon many of its positions north of Baghdad. Upon the army’s withdrawal, peshmerga swiftly seized most of Kirkuk, an oil-rich province contested by Kurds, Arabs, Turkmens and Assyrians. Many commentators have suggested that with Kirkuk in hand, the KRG could declare independence. Some even went so far as to argue that the disintegration of Iraq at the hands of ISIS would benefit the Kurds by enabling them to declare independence.

Others, still, have surmised that the Kurds will secede for financial reasons. Baghdad has slashed the KRG’s budget, citing objections to its moves to unilaterally produce and export oil. Last week, an American judge ordered the seizure of a tanker carrying Kurdish oil that parked 60 miles off the coast of Texas. The judge ultimately could not enforce her order, but the incident nonetheless reinforced the U.S.’s objection to Kurdish oil sales abroad. A KRG official told Reuters that after the ruling that “buyers will now start to step back and think twice before purchasing Kurdish crude.” Unable to sell oil abroad, and with a diminished budget, the thinking goes, the Kurds will secede to expand their economic options.

Yet, despite these motivations, the Kurds have not seceded from Iraq. Yes, KRG President Masoud Barzani has called for an independence referendum, much to the excitement of the largely pro-independence Kurdish population. But at the same time, more quietly, he has been overseeing negotiations to send Kurdish politicians to Baghdad to help form a new Iraqi government. The KRG is pursuing a dual track policy: bargaining to stay part of Iraq on more advantageous terms while also developing the option of secession.

Behind Barzani’s populist appeals, secession is clearly the KRG’s Plan B for now. A closer look at the very real danger ISIS poses to Kurdistan, the complexity of the Kirkuk question, the economic calculations of the KRG and the regional and international context reveals why.

The idea that Iraq’s losses to ISIS will be the Kurds’ gains in terms of statehood is a shallow one. ISIS poses a grave risk to Kurdistan’s hard-won security, and could thwart Kurdish efforts to build an independent state. The group now controls significant territory on two of Kurdistan’s borders – with Iraq and Syria. Although ISIS has largely set its sights on Baghdad, while targeting Christians, Shi’ites and other religious minorities to impose its will in areas it controls, the Kurds have reason to worry. ISIS has targeted Kurds in both Syria and Iraq, and last week seized three towns from the peshmerga in northern Iraq. Iraq Kurds have joined jihadis in Syria – young men who may return home and pose security risks there.

Equally rash is the idea that, with Kurdish forces now in control of most of Kirkuk, the dispute over the province has been simply “resolved overnight.” Kirkuk’s status has been contested for decades, and its competing communities are unlikely to give it up to an independent Kurdistan without a fight. Moreover, ISIS controls the Arab parts of the province in the south, and a growing number of peshmerga have been killed fighting to keep the group at bay. Perhaps most crucially, the fate of Kirkuk’s oil remains to be decided. The Kurds seized two oil fields in the province and have started to pump Kirkuki crude into their own oil infrastructure, exacerbating the long-standing dispute with Baghdad over oil management.

In addition to the risks of secession, the KRG is confronted with tantalizing incentives to remain part of Iraq. Iraq at full export potential would be one of the most oil-rich countries in the world. The KRG, in theory entitled to 17% of the country’s national budget, is keen to leave that door open for the future. Until recently, Kurdistan’s receipt of that money accounted for a good part of the economic boom the region is known for today.

Regional and international interests also confine the Kurds. Iraqi Kurdistan is a landlocked region with powerful neighbors who have long been masters at power plays across borders. Iran and Turkey are opposed to Kurdish independence, fearing that their own restive Kurdish populations may be inspired by the Iraqi Kurds’ example. These two regional superpowers can – and, if history is anything to go by, will – attempt to sabotage any moves toward independence. More broadly, an independent Iraqi Kurdistan would struggle to acquire international recognition — Arab states and the U.S. are defiantly opposed to any breakup of Iraq.

Erbil and Baghdad are playing a high-stakes game of chicken. The KRG is threatening independence, but in actuality is pushing to stay part of Iraq on terms that would essentially allow it to act as a de facto independent state and as a federal Iraqi region, in different situations. This would involve an agreement in which Baghdad, and in principle the U.S., lifts opposition to Kurdish oil sales abroad, recognizes Kurdish control of Kirkuk, and guarantees the deliverance of Kurdistan’s full share of Iraq’s budget. Iraqi Prime Minister Nouri al-Maliki, meanwhile, has not budged, and has instead inflamed tensions by accusing the Kurds of running a conspiracy to bolster ISIS. Barring a swerve, the Kurds may be pushed to pursue secession – but only as a troublesome contingency plan. At least at first, a breakaway Kurdistan may look more like Somaliland – a self-declared independent state that is internationally recognized as an autonomous region of Somalia – than South Sudan: widely recognized, including by its parent state, Sudan.

Iraq is a failing country. The Kurds are better off than the rest of the country, but their own weaknesses and limitations curb their chances of triumphantly breaking away from it – until and unless there is no longer an Iraq to break away from.

Cale Salih is an analyst specializing in Iraq, Syria and Lebanon. 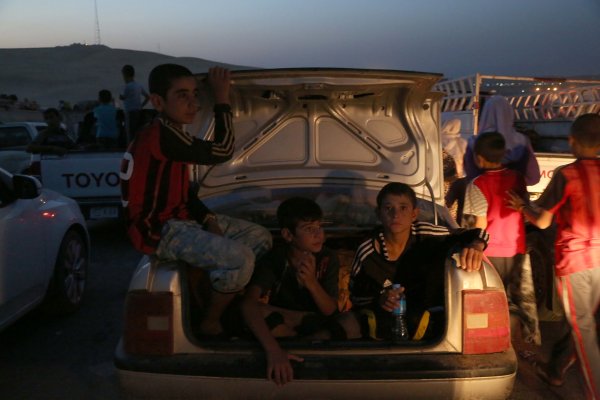 Thousands of Iraqi Refugees Are Stranded on a Mountain
Next Up: Editor's Pick