The San Antonio Spurs announced Tuesday that they have hired Becky Hammon as an assistant coach. Hammon will be the first woman with a coaching position in the National Basketball Association during the regular season.

Six-time all-star Hammon announced her retirement from the Women’s National Basketball Association after 13 seasons of play on July 23. She ranks seventh in WNBA history in points (with 5,809), fourth in assists (1,687) and sixth in games (445) and spent the past eight seasons with the San Antonio Stars.

“I very much look forward to the addition of Becky Hammon to our staff,” said Spurs Head Coach Gregg Popovich. “Having observed her working with our team this past season, I’m confident her basketball IQ, work ethic and interpersonal skills will be a great benefit to the Spurs.”

Popovich hinted that the defending NBA champions might add a woman to their bench earlier this year. When asked in May whether women can coach men’s players, he told the press, “I don’t see why not. There shouldn’t be any limitations. It’s about talent and the ability to do things. It’s not about what your sex is or your race or anything else.”

The announcement comes after another former basketball player, Natalie Nakase, made history by becoming the first female assistant coach in the NBA, sitting on the bench for the Los Angeles Clippers’ 2014 summer league. Before coaching under Doc Rivers in L.A., the former University of California, Los Angeles player was the first woman to coach a men’s professional basketball team in Japan, heading up the Saitama Broncos. The Clippers could still make Nakase a regular-season offer. 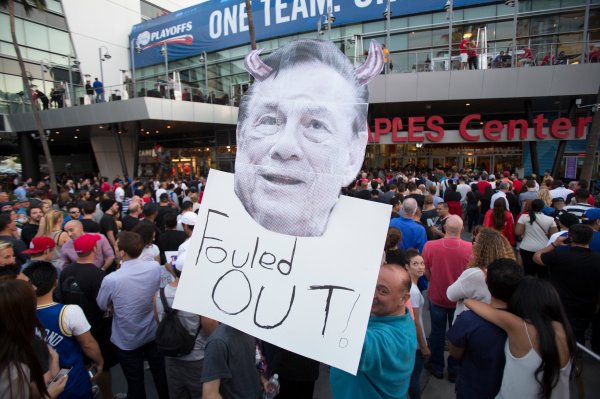 Donald Sterling, Steve Ballmer Meet for the First Time
Next Up: Editor's Pick