A man who arrived at Mount Sinai Hospital in New York City on Monday with a high fever and stomach problems is unlikely to be suffering from the Ebola virus, the New York Health Department said.

The patient had been visiting a West African country where Ebola cases have been reported, but department officials said the patient had none of the known risk factors for Ebola.

“After consultation with CDC and Mount Sinai, the Health Department has concluded that the patient is unlikely to have Ebola. Specimens are being tested for common causes of illness and to definitively exclude Ebola,” it said in a statement.

At a press conference Monday, hospital representatives said they believed the patient was suffering from a more common condition than Ebola and hoped to have a specific diagnosis within the next 48 hours.

Africa is in the midst of the worst Ebola outbreak in history, with over 1,600 reported cases and over 887 deaths in Nigeria, Guinea, Liberia, and Sierra Leone.

Dr. David Reich, president and chief operating officer at Mount Sinai, told TIME that because of the recent Ebola news last week, over this past weekend, the hospital had reviewed and prepared for what it would do if it received a patient with Ebola, including immediate isolation and strict infection-control procedures. “We are very pleased our staff reacted immediately based on their initial screening,” says Reich.

The hospital reported that the patient was being kept in isolation to prevent the spread of the deadly virus, and being tested to confirm whether his symptoms are from Ebola.

“All necessary steps are being taken to ensure the safety of all patients, visitors and staff,” Mount Sinai said in a statement.

When it comes to infectious diseases, Reich says the hospital is well equipped, and experienced. “In terms of contagious disease, the measles is in many ways much more contagious than this,” he says.

Outside the hospital, doctors feel similarly confident in Mount Sinai’s abilities. “If that’s the true diagnosis, I hope the patient does well because it’s a devastating disease,” said Dr. Gustavo Fernandez-Ranvier, a metabolic surgeon at Mount Sinai. “But I’m not worried. People weren’t talking about it at all. There’s risk every day, and this is a great hospital.”

The patient was put in isolation within seven minutes of entering the hospital. Staff members asked all incoming patients about their symptoms and travel histories as a part of the hospital’s plan for a possible Ebola patient.

“Any advanced hospital in the U.S., any hospital with an intensive-care unit has the capacity to isolate patients,” CDC director Dr. Tom Frieden told reporters late last week.

Because Ebola is not airborne and instead spreads through direct contact with bodily fluids like blood and saliva, the CDC has long assured Americans that even if there were to be a patient with Ebola in the U.S. (besides the two Americans with Ebola evacuated from West Africa), the risk for the disease spreading is minimal.

“We are confident that we will not have significant spread of Ebola, even if we were to have a patient with Ebola here,” Frieden said. “We work actively to educate American health care workers on how to isolate patients and how to protect themselves against infection.” 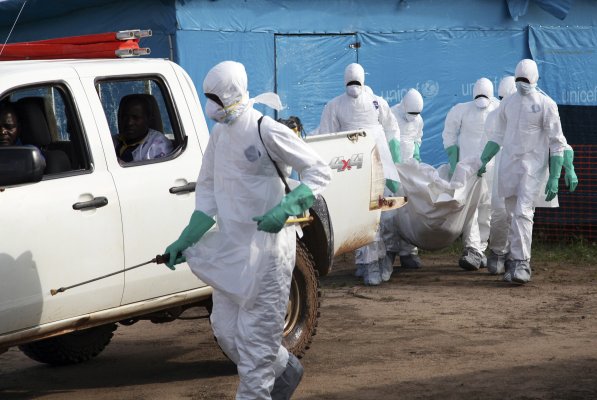