The Knick Is a Period Piece That's Vitally Present

The medical drama, created by Jack Amiel and Michael Begler and produced and directed by Steven Soderbergh, is emphatically a period piece, meticulously produced, capturing turn-of-that-century New York City in all its grimy, typhoid-infected squalor. But this ain’t Downton Abbey, and no crumpets shall be served. The Knick doesn’t hold the past at a remove; it feels as immediate as any series set in 2014. It’s a period drama that never forgets that its characters are on the cusp of their own dizzying future of scientific and cultural change, and it presents them like people who are living in their own present, not someone else’s past.

As we arrive in the halls of Manhattan’s Knickerbocker Hospital, they’re humming with newly wired (and unreliable) electricity. Dr. John Thackery (Clive Owen), the brilliant and bristly new head of surgery, is aggressively exploring experimental treatments, fueled by ambition and surreptitious injections of cocaine. At “The Knick,” people suffer the same things they might at Seattle Grace on Grey’s Anatomy–aneurysms, complications of pregnancy, hernias–but saving them involves much more risk, and a lot of blood and guts, which The Knick apparently orders by the barrel from the same wholesale warehouse as The Strain.

It’s not pretty, and it’s only occasionally happy. Patients often die on the operating table, and those of you squeamish about gore will have a chance early to decide if this is the show for you. (If you make it past that, you’ll be treated to some horrifying yet fascinating depictions of period medicine, like a repair to a damaged nose that involves grafting skin from the arm–which limb must remain sutured to the patient’s nose for weeks. In Thackery’s anatomy, the arm bone is not connected merely to the hand bone.) This is the New York not of Edith Wharton and Henry James–though we glimpse plenty of opulence–but of Jacob Riis and Luc Sante, full of ethnic bigotry and rat-baiting contests.

The Knick shoots history through a grimy lens–it’s Deadwood, extra dead–and Thackery is shooting at demons with that coke-and-opium needle. (His method of choice is an injection between his toes, which he then laces up in a gorgeous pair of shoes that will probably launch a run on white leather.) But beyond that premium-cable darkness, this is also a series about the rush of scientific discovery–like, but different from, Manhattan, Halt and Catch Fire and Masters of Sex. The new magic humankind is harnessing can do more than light hallways, though the use of electricity in surgery still has some bugs, as Thackery’s staff discover when testing new equipment, with sizzling results, on a pig cadaver. (“It does smell pleasantly like breakfast.”)

It’s not simply medicine that’s changing in 1900, but the mechanics of human existence and achievement. As The Knickerbocker acquires its first X-ray machine, for instance, it leads a character to note that the new technology has implications beyond medicine alone. Once, great fortunes were made from material resources: lumber, ore, land. “The next great fortunes,” he says, “will be a result of the immaterial, the unseen wealth buzzing all around us like electricity and x-rays.”

The old fortunes, meanwhile, are more powerful than ever, in the latter days of the Gilded Age, and institutions like The Knick owe their existence to the competitive philanthropy that’s remaking American society. (The fictional patron of Knickerbocker Hospital, Capt. August Robertson, chafes every time he reads about John D. Rockefeller in the New York Times.)

New York City itself is changing, swollen with immigrants whose crowded conditions breed disease, and The Knick–the only major hospital left serving immigrant-heavy downtown as others chase rich patients uptown–is increasingly cash-strapped. And Robertson’s support comes with strings attached. His daughter Cornelia (Juliet Rylance), a progressive crusader, keeps close tabs on Thackery and his staff. And the family orders the hiring of African American Dr. Algernon Edwards (André Holland), a brilliant, Harvard-and-Europe-trained surgeon and researcher who finds Thackery and his staff not nearly as progressive socially as they are medically.

The setup gives The Knick a foot in every stratum of turn-of-the-century society: rich and poor, white and black, Mayflower or Ellis Island, everyone gets sick. It depicts the hustler economy of the city, from mobsters down to the ambulance drivers who make a living collecting commissions for every “body delivered alive” to a hospital (and who violently defend their turf). It follows Edwards from The Knick to the distinct subculture of the African American boarding house where he, though a gainfully employed professional, lives with working-class roomers who see him as an elitist snob.

And it discovers fascinating characters, like Sister Harriet (Cara Seymour), a nun with un-dogmatic views on family planning, and Lucy Elkins (Eve Hewson), a nurse from Kentucky who proves more open-minded than her greenhorn first impression suggests. (Thackery, though Owen plays him expertly as an arrogant cuss, is one of the more overfamiliar figures in the show: we’ve already seen enough dedicated-but–flawed doctors to staff an entire hospital wing.)

It’s the kind of rich picture of the urban past that BBC America’s Copper tried less successfully a couple of years ago, but it also has plenty to say about today. In many ways today’s political debates–over the Tea Party, limits on campaign donations, corporations as people, &c–are really an argument over whether the 20th century was a good idea, with its safety nets and curbs on private power. It may be a coincidence that this show and Ken Burns’ The Roosevelts in September, which begins with Teddy Roosevelt’s progressivism, are revisiting this period at the same time. But it’s happening while a not-insignificant number of free-marketeers want to revisit it too, one way or another.

Soderbergh–“retired” from feature film as of last year– directs each episode, and he’s given the show a look that’s not only distinctive for a period drama but that serves the show’s themes. Like other big-ticket TV re-creations of history–HBO’s Boardwalk Empire, say–The Knick is painstaking in its details and the brownstone Brooklyn locations that stand-in for gaslight-era Manhattan. But it looks distinctively like a show shot in 2014.

There are few sepia clichés, no effort to give the scenes that kind of stately composure that TV uses as easy shorthand for the past. Instead, there’s handheld camera that races to catch up with characters at the edge of the frame; there’s garish surgical light in the operating-room scenes. For us, this is the past, yes, but for Thackery and his fellow Knickerbockers it is the (literally) bleeding edge of another era, and Soderbergh gives it a dreamlike, jittery immediacy. And the images are buttressed by the secret star of The Knick, Cliff Martinez’s gorgeous score–not tinkly ragtime piano but spare, haunting, ambient electronica. It’s anachronistic, but to a point, and it’s damned effective.

In ambition and execution The Knick is miles ahead of anything else from Cinemax, which has specialized in just-smart-enough entertainments like Strike Back and Banshee–if you’d missed the credits, you’d assume that it was on its sister HBO, and it could give its network the same artistic upgrade that the Deadwood generation of dramas gave that channel. It doesn’t have the distinctive voice and language that David Milch gave Deadwood, though, and the writing isn’t always up to the distinctive direction and performances. (At one point, it triple-underlines a ripped-from-history plot about a typhoid outbreak being traced back to the kitchen worker Mary Mallon by having a character wonder aloud, “Where are you, Typhoid Mary?”)

The show grows on you, though, or it did on me; Cinemax sent seven episodes and though I squirmed early on, I found myself happily bingeing them. As if you’re walking into a dimly lit brownstone, it takes a while for your eyes to adjust–but when they do, you see not just gore but a wrestling with the mechanics of life, not just grimness but an odd, vital kind of hope.

As Soderbergh directs it, The Knick has a lot to say with and about illumination, from the dank interiors of overfilled tenements to the blinding cyberpunk glare of the operating room. But it all seems to come down to a larger story, one that’s not only about darkness, but about humankind struggling, blinking, toward the light. 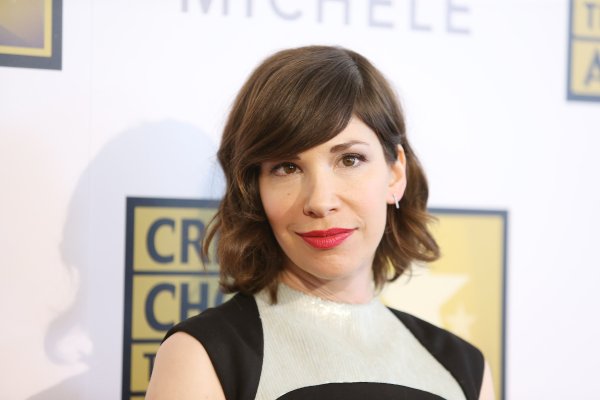