Is This Woman the World's Selfie Queen?

Kim Kardashian’s new book, Selfish, reportedly has 1200 selfies. But a woman from Bangkok, Thailand, makes her look like an amateur. Mortao Maotor, as she calls herself on Instagram, has posted more than 12,000 pictures of herself to the internet, often at a clip of more than 200 a week. She has about 20,000 followers, a not particularly high number, but she more than makes up for it in her dedication to her craft. So we’re wondering: could she be the selfie queen?

By way of comparison, Mr. Pimpgoodgame, the self-proclaimed selfie king from Texas, has 10 times as many followers but has posted a paltry 600 self portraits. Jen Selter, who has garnered more than 4,000,000 followers with pictures of her unusually rounded rump, has posted only 457 shots at last count. And then there’s Ms. K., with her millions of followers–but counting her self-portraits would be as absurd as counting sand. The Kardashians play in a their own selfie league.

Mortao, which is not her real name, defies the stereotype of the selfie-taker. She’s 40-ish, not famous and is married to the owner of Room of Art, an antique store/art gallery in Bangkok at which she takes many of her photos. Mortao doesn’t speak English, but through a woman who answered the phone at the Room of Art and said she was Mortao’s husband’s daughter, she declined to comment on why she posts so many selfies, saying it was “quite personal.” Other posts suggest she has older siblings and loves dogs and desserts.

It’s not all that surprising that Thailand, a country which reportedly has more mobile phone subscribers than it has people, might be the home of world’s most dogged selfie taker. During the coup in May, some locals even took selfies with the soldiers enforcing martial law. The country’s Ministry of Health was moved to issue a warning that taking and posting selfies was not helpful to the self-esteeem of young Thais.

Not all of Mortao’s pictures are of her face. She also likes to shoot her legs and her iced drinks or meals (many of her pictures are taken from a Bangkok Starbucks or an After You cafe.) But the overwhelming majority of them are classic selfies. She has fondness for shots taken in apparently the same bathroom mirror, perhaps the one in the Pantip Plaza in Ngam Wong Wan near Bangkok, which is often geolocated in the photos. While her photos often draw risque comments, and some are suggestive, none of her images are pornographic, and she only replies to the clean remarks, with unfailing politeness.

Mortao, whose account was first brought to our attention by the social media analysts at Nitrogram (now called Totems), is an impressive candidate for the biggest Practitioner of Selfie Taking Extraordinarily Regularly (POSTER), but we’d be willing to entertain others. 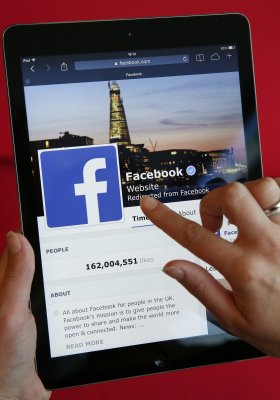 Facebook Could Start Labeling Satirical Posts
Next Up: Editor's Pick