In the middle of summer, as the fighting in eastern Ukraine receded toward the Russian border, psychiatrists working in the area began to notice a strange affliction among the people caught up in the conflict. Its symptoms were hard to discern at first from the more typical psychological damage the war was inflicting on local people—anxiety, insomnia, depression—but they were distinct enough for the doctors to start giving the malady names: “info-intoxication,” they called it, or more simply, “Ukrainian syndrome.”

The difficulties of treating it became clear to Dr. Yuri Fisun in early July, when the pro-Russian rebel militias retreated from his hometown of Slavyansk, and he was finally able to see patients again, working as a volunteer at a makeshift counseling center set up inside the separatists’ former headquarters in the local City Hall. He never took sides in the conflict, but like many of the people who lived through it, he came away shell-shocked and suspicious of both sides. The Ukrainian military had bombarded this key rebel stronghold with heavy artillery for weeks, depriving it of water and power as they encircled it with military hardware. “The people who stayed during the fighting had trouble sleeping once the sound of explosions had stopped,” he says. “They had gotten so used to them.”

But the town has slowly started coming back to life as the government retakes control. Pension payments have resumed, the people who fled the fighting are returning home, a couple of cafes have reopened, and in City Hall, a group of trauma therapists is trying to treat a community that seems to be suffering from a collective case of post-traumatic stress. The therapists don’t see their work as merely a source of comfort for the locals. It is rather a test of whether the deeper tensions of this conflict can be resolved, or whether they are bound to bubble up again with another round of violence.

What Fisun and his colleagues noticed was that the forces feeding the hatred in Slavyansk survived even after the fighting stopped. Mixed in among the signs of trauma was a great deal of aggression and paranoia, usually expressed with peculiar phrases that Fisun sensed his patients were not coming up with on their own. He eventually found their source: television.

A slight man with a lulling timbre to his voice, Fisun did not own a TV himself, so he got into the habit of watching the news every evening online and taking notes in preparation for his patients the next day. He focused on the Russian state-run networks, which many of the locals still get through satellite dishes or the Internet, and he found a pattern. “Overnight they had internalized the latest propaganda,” he tells TIME. “And it was surprisingly hard to dislodge.”

Ever since the Ukrainian forces took back control of Slavyansk, Russian state media has insisted that wholesale purges of the population had ensued. There were mass arrests, “execution lists” and bounties for the bodies of civilians, according to Kremlin-run TV broadcasts. A particularly sickening report on Channel One, the Kremlin’s main network, claimed that Ukrainian soldiers had crucified a three-year-old boy on a bulletin board in the central square of Slavyansk and made his mother watch him bleed to death.

None of this had any basis in fact, as TIME confirmed through two weeks of reporting in the former rebel strongholds. These towns and villages have indeed suffered extensive damage from the Ukrainian bombardment, and the U.N. estimates that hundreds of civilians have been killed in the conflict so far, many from the impact of shelling. But once the army moves in to retake control, they have so far made few discernible attempts to weed out the remaining separatists, many of whom have melted back into these communities.

“They came once in the beginning, checked my papers to make sure I’m local, and I haven’t seen them since then,” says Alexei, a 34-year-old lumberjack in the war-ravaged village of Semyonovka, declining to give his surname. “I haven’t even heard of anybody getting arrested or interrogated,” says Sergei, a 38-year-old mechanic in the town of Debaltsevo, who also declined to be named, citing a distrust of journalists. Both of them said they had not joined the separatist militias themselves. But while Slavyansk was in rebel control, many if not most of the men in the area provided at least some help to the pro-Russian cause. Failing to do so would have drawn the suspicion of, if not also reprisals from, the rebels and their supporters.

These days armed soldiers are rarely seen patrolling the streets of Slavyansk, and state security agents identifiable by their bullet proof vests and sidearms seem to go out of their way to interact politely with locals while standing in line at a pizzeria or grocery store. “Don’t get me wrong, there is a desire among some of the boys to go in and raise hell,” says Taras Katsuba, a Ukrainian lieutenant colonel, standing with a group of soldiers outside town of Debaltsevo on August 1, the day after government forces took control of it. “They’ve seen their buddies get killed. But we know the situation is overheated right now. Folks are scared, and if we go in and start arresting people or whatever, it’ll only make things worse.”

Yet the rumors of Ukrainian death squads and “cleanup operations” have nevertheless persisted in these towns, and Fisun says it is the goal of mental health professionals to counteract them one by one. Armed with his notes on the latest Russian news broadcasts, he goes into therapy sessions with an aim to persuade patients that they are false, that they have nothing to fear from the Ukrainian government. “This is a top priority for us right now,” he says. “It is the main thing driving the neuroses and the social aggression.”

His colleagues have taken a more direct approach. Tatyana Aslanyan, a psychiatrist who is coordinating teams of trauma counselors working around Slavyansk, usually sits and listens quietly to the people who come for her therapy sessions. These sessions are open to the public, organized by civil society groups and run by local volunteers. But the mistrust in the city is so pervasive, Aslanyan says, “many people still see us as some kind of filtration center; they’re scared we’ll hand them over to the security services.” So it’s no surprise that turnout is usually modest, and men are rare among the people seeking help.

During a recent group session in the village of Semyonovka, about a dozen local women sat around in a circle at the village congress hall, whose roof had been blown open with a mortar during the fighting in May and June. Semyonovka has suffered more physical damage than perhaps any other place in the war. “It was better when we didn’t have electricity,” said one of the locals taking part in the session, a young mother of three. (The therapists asked TIME not to print their names.) “But now we can turn on the TV and get depressed again.”

For the first time Aslanyan interjected sharply: “No television!” she shouted. “Listen to me, turn it off, throw it away.” The woman began to cry.

The source of distress is not only the Russian media, Aslanyan says in an interview the previous day. Though most of Ukraine’s news networks are privately owned, they have often sought to fight fire with fire in the propaganda war, denouncing the separatist rebels as terrorists and their sympathizers as traitors. Numerous reports have accused the rebel fighters of “kidnapping” dozens of children when they were, in fact, apparently just trying to evacuate them from the warzone.

In May, separatist fighters helped evacuate the mental hospital outside Slavyansk where Fisun has worked for 35 years. It had been hit by a number of mortars by then, he says, and the rebels “brought buses around” to drive the patients to safety. “As I understand, these were the local boys,” says Fisun, “not Russians but men from Slavyansk who had joined the rebel militias.” He has no sympathy for their cause, but the depictions of them as terrorists on Ukrainian television have simply mirrored the warped picture available on the Russian airwaves. “As a result you hear people demanding more of a purge in their own communities,” says Aslanyan. “Many of them feel the Ukrainian forces have been too soft, that they have not done enough to punish people.”

Olga Kadysheva, another psychiatrist working as a volunteer in the warzone, also believes that what she calls the “info-intoxication” is coming from all sides, with television and online news reports feeding rumors that get spread by word of mouth. “The treatment is diet: cut off the intake of information, all of it, Ukrainian, Russian, it doesn’t matter.” But the deeper concern among the therapists is that the rumor mill is only feeding fears and prejudices that existed long before the conflict, and could persist long after the fighting stops. The ethnic Russians in eastern Ukraine, who make up a majority in many towns across the region, have long felt like outsiders in their own country, in part because Ukrainian is the only official language.

“The polarization of society is what deepens the break in the psyche,” says Kadysheva, who came from the city of Kharkiv, outside the warzone, to help coordinate and train therapists in Slavyansk. “Am I Russian or am I Ukrainian? Am I a separatist or am I not?” As the rebels retreat from their strongholds deeper into southern and eastern Ukraine, the rifts in society that their war has left behind have looked more like a shattered mirror than any clean split down the middle. Those who stayed in bomb shelters throughout the fighting condemn those who fled the warzone. Those who did not support the separatists condemn those two did, and vice versa. The dividing lines now seem to form a tapestry of mistrust and mutual reprobation, the local psychiatrists say, and mending them up again will take years. In the meantime, the propaganda outlets on both sides will be able to play on these divisions, making it harder for the communities to get on with their lives. 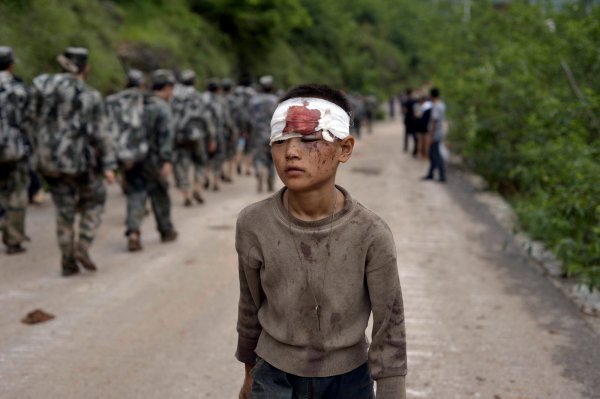 Earthquake in China Kills at Least 589
Next Up: Editor's Pick