A large sign outside the entrance of the 20th International AIDS Conference in Melbourne on July 20, 2014.
© Stringer . / Reuters&mdash;REUTERS
By David Stout

As many as 30 attendees from last month’s international AIDS 2014 conference in Melbourne have refused to fly home and are planning to seek asylum in the country after their current visas have expired.

The delegates in question are reportedly from several African nations, including Uganda, Tanzania, Rwanda, Nigeria and Ethiopia, according to the Guardian.

“They’re very predictably from those countries where often their lives are at risk, not only from the disease but from the political violence [aimed] towards them,” Pamela Curr, campaign coordinator at the Asylum Seeker Resource Centre, tells TIME.

On Monday, refugee-support organizations acknowledged that they were providing the individuals with legal advice and helping them secure housing as they begin preparing for the lengthy application process.

However, activists say Australia’s recent crackdown on individuals seeking asylum in the country may make it difficult for the AIDS 2014 delegates to be granted the coveted status.

“It is currently extremely difficult to get asylum,” says Curr. “An asylum seeker in this country is at the absolute bottom of the ladder when it comes to human rights.”

Under the direction of Australian Prime Minister Tony Abbott, authorities have begun enforcing a draconian policy aimed at deterring boatloads of desperate immigrants from washing up on the country’s shores.

Because the conference delegates arrived in Australia by plane with visas, they are not subject to immediate deportation. However, it will take up to two years for their cases to be heard by the Department of Immigration and Border Protection.

“All claims for protection are considered on their individual merits and according to law,” a spokeswoman from Immigration Minister Scott Morrison’s office told AFP. 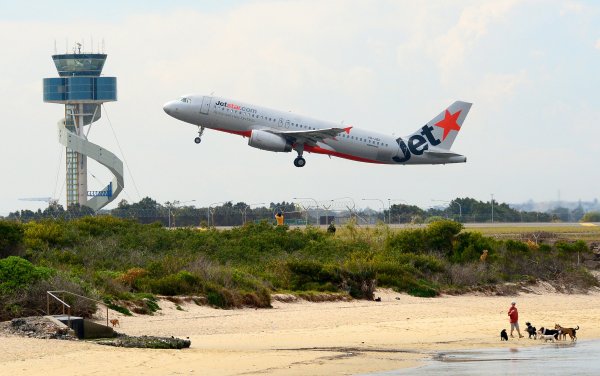 Flight Attendant Reminds Cabin to Flush Drugs Down Toilet
Next Up: Editor's Pick