Chinese soldiers march in front of the Id Kah Mosque, China's largest, in Kashgar, on July 31, 2014. China has increased security in many parts of restive Xinjiang following some of the worst violence in months
Kevin Frayer—Getty Images
By Emily Rauhala / Beijing

It took a week, but authorities have finally released a death toll for the violence that rocked China’s far northwestern frontier on July 28. Early reports said “dozens” were killed or injured; now the government says nearly 100 were killed, and 215 arrested, making it the deadliest single incident since riots hit Xinjiang Uighur Autonomous Region’s capital, Urumqi, in 2009. But even as more details are released, questions remain about what, exactly, happened in Shache County (also known as Yarkand in the Uighur language). And with the area shut to foreign journalists, and Internet access spotty across the region, those questions will be difficult to answer.

As TIME reported last week, there are at least two competing accounts of what happened in Shache — and neither feels complete. Some 24 hours after the unrest, China’s official newswire Xinhua issued a breaking-news alert stating that dozens had been killed or injured in a premeditated terrorist attack on a police station in Xinjiang. After local officials discovered a cache of explosives, state media said, knife-wielding mobs went on a rampage, killing civilians and torching several vehicles. One report speculated that the attack was timed to coincide with a commodity fair.

The official narrative has changed in the interim. The latest details released by Chinese authorities suggest the incident was both more severe, and less isolated, than it initially seemed. State media now put the death toll at 96, including 37 civilians, and 59 people identified as terrorists. The violence “was preceded by a large-scale police crackdown in Hotan,” reported the Global Times, and was “followed” by the murder, in Kashgar, of an imam with ties to the government. Chinese news outlets say the unrest was coordinated by extremists with links to a group called the East Turkestan Islamic Movement, and that banners calling for jihad were found at the scene.

Other groups paint a strikingly different picture. An early report by Uighur-speaking Radio Free Asia reporters Shohret Hoshur and Eset Sulaiman said the uprising was linked to restrictions during the Muslim holy month of Ramadan and the alleged extrajudicial killing of a Uighur family. In their account — which here bears some similarity to the government’s narrative — knife- and ax-wielding Uighurs went on a rampage and were subsequently gunned down by Chinese police. A representative from the World Uyghur Congress, an overseas exile group, presented a slightly different story, saying the armed Uighurs were in fact protesters speaking out against the Ramadan restrictions, not rioters per se.

The divergent accounts say much about the divisions affecting Xinjiang, and the difficulty of reporting on the area. The vast area known as Xinjiang Uighur Autonomous Region is the homeland of the mostly Muslim, Turkic Uighur people, but is claimed also as Chinese territory. Since coming to power, the Chinese Communist Party has sent waves of migrants to Xinjiang in an attempt to settle its far west; in 1949, China’s ethnic Han majority accounted for only about 6% of the population; today, the figure is more than 40%. The government says it is bringing prosperity to the region, but many ethnic Uighurs say they have been cut off from the economic benefits and resent restrictions on freedom of movement and their right to practice their faith. A small minority has waged a decades-long struggle against Chinese authorities, often targeting police stations or transport hubs.

Over the past year, the conflict has intensified considerably. In October 2013, an SUV carrying three ethnic Uighurs plowed through tourists in Beijing’s Tiananmen Square, killing five, including the occupants. In March 2014, a group of black-clad, knife-wielding attackers slashed its way through a busy train station in Kunming, the capital of Yunnan province, killing 29. Chinese authorities blamed that incident, and two subsequent ambushes in the regional capital, Urumqi, on terrorist groups with overseas ties. Little information has been released about the perpetrators or their victims. And with much of Xinjiang closed to foreign reporters, the government’s account is difficult to independently confirm.

The central government has responded by tightening already stringent security measures and stepping up efforts to integrate Uighurs — by force, if necessary. There are police trucks and officers in riot gear in town squares across the region, and many towns, particularly in Uighur-dominated southwest Xinjiang, are now sealed off by police checkpoints. The physical lockdown has come with curbs on religious practice, including attempts to ban civil servants from fasting during Ramadan and, reportedly, efforts to stop Uighur women from covering their hair.

The authorities are calling the latest crackdown a “people’s war” on terrorism, urging — and in many cases, paying — people to come forward with information about suspicious activity. The government recently announced it would offer 300 million yuan ($48.6 million), in cash for “hunting terrorists.” At a recent ceremony in the city of Hotan, 10,000 local officials and civilians were given some 4.23 million yuan ($685,000) for their trouble. Critics worry, however, that the scheme will only deepen distrust between Uighurs and the Han-dominated central government, turning neighbors against each other and potentially criminalizing certain religious practices that have nothing to do with organized terrorism.

Meanwhile, amid calls for calm, the government’s rhetoric is heating up. In the wake of the latest attack, Xinjiang party secretary Zhang Chunxian, promised an even tougher crackdown to come. “We have to hit hard, hit accurately and hit with awe-inspiring force,” he said. “To fight such evils we must aim at extermination. To cut weeds we must dig out the roots.”

The statement was no doubt designed to reassure people that the government has the situation under control. Somehow, though, the nihilistic imagery feels more like a warning of more conflict, and violence, to come. 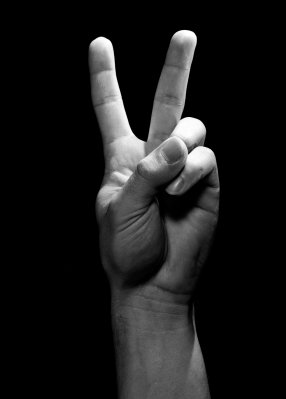 Have You Ever Wondered Why East Asians Spontaneously Make V-Signs in Photos?
Next Up: Editor's Pick