Running back Ray Rice of the Baltimore Ravens addresses a news conference with his wife Janay (not pictured) at the Ravens training center on May 23, 2014 in Owings Mills, Maryland.
Rob Carr—Getty Images
By Justin Worland

The head of the National Football League defended his decision to suspend Ray Rice for two games after the Baltimore Ravens running back was indicted for assaulting his then-fiancée Janay Palmer at an Atlantic City casino in February. Goodell’s comments, which he made during a Friday press conference in Canton, Ohio, follow intense criticism that the penalty for the star athlete was too weak.

“If it’s a first offense, someone who’s had a strong background of being very responsible in the community, doing the right things and not violating other policies or anything else that reflect poorly on the NFL, then we would take that into account,” said NFL commissioner Roger Goodell.

He added, “We’ve dealt with it in a serious manner, and we’re very confident that this young man understands where he is and what he needs to do going forward.”

Rice’s alleged assault and brief suspension has led to a number of offshoot controversies, including inflammatory comments made by ESPN sports analyst Stephen A. Smith, which got the commentator suspended for one week.

Rice and Palmer were married in March. Rice is still facing a third-degree aggravated assault charge and could face up to five years in prison if convicted.

On Thursday, the running back publicly apologized for the incident, saying, “My actions that night were totally inexcusable.” 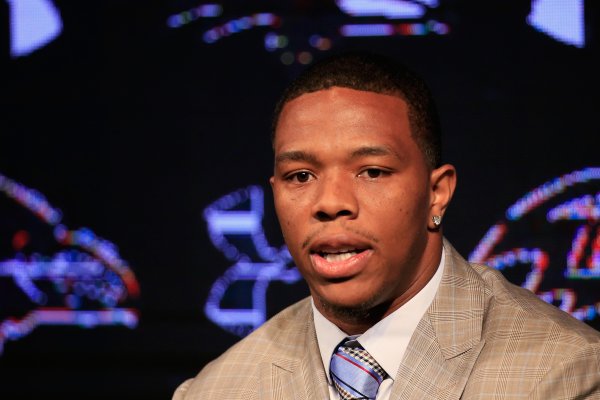 Ray Rice Suspended For 2 Games Over Assault Charge
Next Up: Editor's Pick