The Isle of Men: The World’s Deadliest Race

Once a year, for six days, the population of a small island in the Irish Sea doubles as motorcycle enthusiasts from around the globe flock to the racing mecca.

The Isle of Man Tourist Trophy is perhaps the most dangerous race on earth, with 242 deaths in its 107 years of existence. The TT, as it is commonly known, is the oldest race in motorcycle history, uniting high-octane adrenaline junkies with fun loving drunken bikers.

With six different events to boast of, the Manx TT races paralyze the island, as the event closes down these country roads so bikers can zoom, curve and dip through a 37.5 mile long loop at a frightening 130 mph average speed—that’s one lap in less than 18 minutes. All the kids on the island are given time off and the local economy thrives, making a large part of its earnings for the year. For those few days in spring, the incessant roar of motorcycle engines spewing high-pitched noise can be heard across the island as racers rev up for the main event.

In addition to traditional motorcycle racing, the event includes categories for electric motorcycles, sidecar racing, and various engine-sized motorbikes that see racers compete for top rank, risking life and limb in the process. Over the course of this year’s races, two men tragically lost their lives in crashes, as did one tourist riding his bike and a field marshal hired to clear the track before racing begins.

Conor Cummins, a seasoned rider describes the event as “the best race on the planet”—this despite a devastating crash in 2010 that shattered his arm, broke his back, dislocated his knee, bruised his lung and fractured his pelvis. Cummins, a native to the Isle of Man, was back on his bike 8 months later and somehow managed to compete in the following year’s Senior TT. “That was then and this is now,” says Cummins on the eve of the 2014 race “and it’s taken a lot to get back from to be honest, it took a lot of strength… And hopefully I’ll start seeing the fruits of my labors.”

On race day, Cummins, the soft spoken Manx rider tore through six laps and 226.38 miles as he competed with the heir to the Dunlop family name, Michael Dunlop. Despite a neck-and-neck race, Cummins came in second and was cheered as a victor by the local population, proving his worth to his Honda-sponsored team in the process.

As the list of deceased racers continues to grow, some wonder how much longer this race can go on.

“No one is forcing anyone to do this race… there’s not one man in that paddock that signed up because they have to” says Cummins. “iI’s because they want to.”

Die hard fans stand in the way of anyone who objects to the danger of the event, as one fan gleefully explained. When asked what he would do if they tried to cancel the Isle of Man TT, he responded simply: “Over my dead body.”

A little over a month after the TT ended, Conor crashed again at the Southern 100 on the Isle of Man, suffering a broken left forearm .“Had a bit of a shunt yesterday and got ran into by another bike,” he said. “I will be back better and stronger in no time all being well. Game on!” 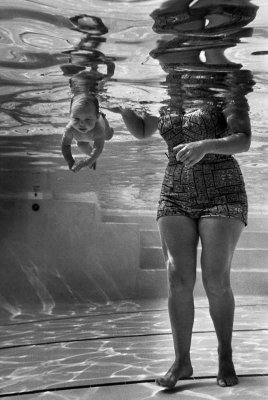 This 9-Week-Old Water Baby Was the 'World's Youngest Swimmer'
Next Up: Editor's Pick