REVIEW: Marvel's Guardians of the Galaxy: The Expendables In Outer Space

Earth, 1988. Young Peter Quill (Wyatt Oleff) stands brooding outside his dying mother’s hospital room and holding a cassette player with an “Awesome Mix” of ’70s pop hits his mom gave him. He walks into the room and is given a present. “You open it when I’m gone,” his mom says, and then addresses her final words to Peter: “Take my hand.” But he doesn’t, and she, as if in response to her son’s slight, promptly dies. The boy rushes agonized into the starry night, where an alien spaceship Hoovers him up for a life in outer space. Twenty-six years later, when Peter (now Chris Pratt) has grown into a brawny rogue who calls himself “Star-Lord,” he will still feel a special poignancy for his mom — not because he refused her last wish but because she gave him that cool mix tape.

The emotional signals are going haywire in these early scenes from Marvel’s Guardians of the Galaxy. Peter is a sensitive kid about to make an interplanetary connection, like young Elliot in Steven Spielberg’s E.T.: The Extra-Terrestrial. Yet the adult Peter seems hardly to recall his mistreatment of his mother — a rejection that should saddle him with years of psychotherapy and a lifetime of guilt. He just wants to play mom’s oldies, as he grows into a facsimile of another early-’80s Spielberg hero: Indiana Jones in Raiders of the Lost Ark. And not the archaeologist Indy. This is the Indy who, when he’s menaced by a scimitar-wielding Arab, doesn’t reach for his famous bullwhip. He just pulls out a revolver and shoots the guy dead.

(READ: Richard Schickel’s 1981 review of Raiders of the Lost Ark by subscribing to TIME)

This self-styled “legendary outlaw,” unknown to most of his adversaries, is an anomaly in the Marvel canon. The first reel of director-cowriter James Gunn’s movie tipped us off that Peter Quill is no Peter Parker, whose guilt over Uncle Ben’s death deeply informed his Spider-Man personality. The new Peter, unhaunted and largely conscience-free, is Indy plus Han Solo; and Guardians is a jauntier, far brattier Star Wars. Alas, making fun and profit of the George Lucas saga is a tactic about 30 years behind the curve; Mel Brooks did it, with giddier panache, in the 1987 Spaceballs.

Not so much a hero on a quest as a stud in a reality-show survival game, Peter hooks up with the green Gamora (Avatar’s Zoe Saldana), the muscle-bound, elaborately tattooed Drax (Dave Bautista), the snarky raccoon Rocket (voiced by Bradley Cooper) and a tree-being named Groot (grunted by Vin Diesel). Dubbing themselves, as Rocket proclaims, “the frickin’ Guardians of the Galaxy,” they hurt villains, battle the Taliban-ish zealot Ronan (Lee Pace) and eventually bond into a group tight enough to warrant the sequel announced at the end.

Peter’s gang might be the Wild Bunch of Merry Men — or, more aptly, the far-flung Expendables. For if the Marvel comics owners had held a garage sale of their least valuable subheroes, and you’d bought five, you might have accidentally assembled the Guardians team. The quintet’s mythology fills only a half-page of the 400-page Marvel Encyclopedia; pleas for immortalizing them on film have been muted. But the company’s movie craw must be fed, so here’s the fourth Marvel movie in four months, after the excellent Captain America: The Winter Soldier and two inessential installments, The Amazing Spider-Man 2 and X-Men: Days of Future Past.

The movie’s MacGuffin — Alfred Hitchcock’s word for the precious, mysterious contrivance that drives an action-film’s plot — is an orb that Peter says has “an Ark of the Covenant, Maltese Falcon kind of vibe.” That line keys Gunn’s central strategy: making explicit reference to dozens of movies and pop songs, mostly of ’70s and ’80s vintage. Like Captain America’s Steve Rogers, who needs to catch up on 70 years of pop culture but concentrates on ’70s songs and films, Peter and Gunn are steeped in nostalgia for that decade. (Such oldies as “I’m Not In Love,” “Hooked on a Feeling,” “The Piña Colada Song,” “Ooh Child” and “Ain’t No Mountain High Enough” spring from Peter’s mom’s mix tape onto the soundtrack CD.) Gunn not only filches from the trove, he graciously acknowledges the theft. He’s like a burglar who takes all your stuff and leaves a descriptive Post-It where each stolen item used to be.

Give points to Pratt, who plays Andy Dwyer on Parks and Recreation, and provided the voice of the clueless hero Emmet in The LEGO Movie, for gleefully throwing himself into the farrago. And sympathize with Saldana, who has to play a less stately version of her Neytiri from Avatar. (She’s not far off when she exasperates, “I’m surrounded by the biggest idiots in the galaxy.”) Cooper’s adroitly animated Rocket is the most annoying of the group. The arboreal Groot is a sweetly mournful creature — a galactic poobah named Rhomann Dey (John C. Reilly) calls him “Rocket’s personal houseplant-slash-muscle” — in whose service Diesel must have spent all of five minutes in the recording studio intoning variations on the line, “I am Groot!”

(READ: The Socialist message behind The LEGO Movie)

Bautista gets the best lines as Drax, whose brain is so maddeningly literal that when someone says, “Metaphors go over his head,” he shouts, “Nothing goes over my head! My reflexes are too fast. I would catch it.” But the former WWE champ lacks the wit beneath the bulk shown by Dwayne Johnson, André the Giant and other pro wrestlers turned movie actors.

The film has some cool fight scenes, as when Peter and Gamora engage in furious karate while both are flat on their backs, and some stellar art direction: one of the group’s tours takes them to Planet Knowhere, visualized as the giant severed head of an ancient celestial being. These are brief diversions in what Gunn may intend as a fondly mocking deconstruction of the more serious Marvel movies. If so, he’s just being redundant. The Iron Man and Captain America films are well aware of their outlandish elements; Tony Stark and Steve Rogers often make depreciating jokes about themselves.

(READ: How Tony Stark got a heart in Iron Man Three)

Moviegoers who have wearied of the super-serious father issues that afflict Marvel heroes — not just Peter Parker but also Tony Stark, and Loki in the Thor franchise — may welcome this new film’s practiced carelessness, and be grateful that Peter Quill’s memories of his mother are confined to loving her taste of pop music. But the lightly derisive, live-action-cartoon tone robs the movie of any majesty, even of the comic-book type, and the many violent deaths of their suitable gravity. Something important has to be at stake in a Marvel movie; it isn’t here. If the studio bosses think that Guardians of the Galaxy has both the weight and the buoyancy that make some Marvel movies supreme entertainments, the joke’s on them. 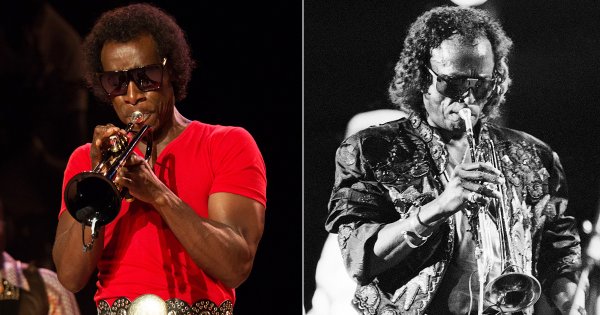 Biopic Actors and Their Real-Life Counterparts
Next Up: Editor's Pick