The Vessyl is the world’s first smart cup, a product that can tell you exactly what you’re drinking and what its nutrient content is in “real time” via an LED screen on its side. With the help of an iPhone app, the Vessyl also aggregates data about your beverage-ingesting habits and can tell you how much you need to drink to be hydrated—or how many calories you’re drinking, or if you need more protein.

To the some 10,000 early adopters who have pre-ordered Vessyls since they went on sale in June, that might sound like the coolest new technology ever, a next step in an era when constant feedback is closing in on oxygen among things people simply can’t live without.

To others, including Stephen Colbert—or at least the newsman he plays on TV—this may sound like the most unnecessary $199 object money can buy, right after gadgets that tell us when we’re walking or drunk or tired, things that humans managed on their own for many centuries before this one.

Speaking about the Vessyl, the first product from company Mark One, CEO Justin Lee describes what most people would just call a cup as “a form factor that can live really well on tabletop,” one that can “activate the information that people desire.” But he is earnest when he says that the digital container his team spent seven years designing, spurred by grants from the Canadian government, will aid people in making healthier decisions—by helping them think more about the some 500 liquid calories they consume on average each day.

“When people track what they consume, the likelihood of achieving health goals is much higher,” he says. “The problem right now though is that the current method of tracking things, whether that’s writing something down or typing it into an app, whatever that may be, it’s still too much friction.” And while many drinks come with handy nutritional information right there on the side of the can, plenty don’t, whether it’s a Coke at a movie theater or a coffee at the office or gin and tonic you make at home.

There are other signs around the company’s San Francisco headquarters signaling that this venture could be something serious. Upstairs is a computer with a picture of Michael Jordan on the desktop, the new workstation of top Nike designer Jason Mayden, who is now taking charge of the company’s brand. “We help people unlock what they eat,” Mayden says, “and help them make meaningful decisions from there.” The company has lured a veteran Apple engineer onto their team, as well as Mark Berman, a lifestyle medicine specialist who worked on childhood obesity at the Robert Wood Johnson Foundation.

Watching the Vessyl prototype work is something like the feeling of a magician guessing your card—multiplied by Arthur C. Clarke. Sensors built into the svelte container analyze potables at a molecular level. If the Vessyl programmers have added a particular drink to their database and given it a name, the cup will send a signal via Bluetooth to the app, which will display the results at a hyper-specific level; the cup knows not just that you’re about to drink wine but that it’s Barefoot Pinot Grigio. If the drink isn’t in the database, the app will label it as a “Mix,” but can still give you a precise analysis of the calories, sugar, caffeine, protein, sodium and vitamins that are in whatever liquid the Vessyl currently holds.

The Vessyl might also be able to tell users if anything they’re drinking contains contaminants, or even simple things like whether milk has gone bad, though Lee says they’re focused on supplying nutrient content for now. That’s because the obesity “pandemic,” as Berman calls it, is a main driver of their current work. “The classic thinking has been, Well, if you just tell people what to eat and educate them, that’s the end of the story,” he says. “What we’ve found from trying to do that for decades is that while that’s really important, it’s not enough … Showing people how it adds up, we think, will be very powerful and will drive behavior change.”

Here’s everything else you ever wanted to know about this new contraption:

Who came up with this idea?

Justin Lee, a 29-year-old Canadian, thought of the idea while studying biomedical computing at Queen’s University in Kingston, Ontario. He co-founded the company Mark One, which now employees about 15 people, in Canada and San Francisco. Vessyl is the company’s first product.

Why did it take seven years to design it?

Lee says the company went through dozens to a hundred iterations, depending how you count them, changing the size, shape and aesthetics in pursuit of a product that would feel natural in both home and office environments. Of course, there was also the challenge of fitting the processor, battery and sensors into the thin wall of the cup. And Berman says people need to like the way it looks. “We can’t give people tools that are ugly and expect them to use them,” he says.

Where did the name come from?

Lee says this name speaks to the fundamental function of all our glasses, tumblers, mugs and water bottles—all containers this is meant to replace.

How does it work?

Lee says they developed their sensor by adapting technology that’s been used in the food industry for some time—something like what a peanut butter-maker might employ to make sure all their product is consistent and high quality, for instance. The sensor is essentially the entire interior of the cup. All you have to do is pour a drink in and the Vessyl automatically analyzes its nutritional content, displaying calories on the container itself and more detailed information through the app.

Why would people need this?

The makers of Vessyl are positioning their product as a health monitoring tool, something that can help you lose weight or make sure you’re getting enough protein when you’re trying to bulk up. A pregnant woman might use it to monitor her caffeine levels. And early-adopter types might just think it’s nifty.

But can’t you just look at those nutritional labels on the sides of things like cans of soda?

Here is Lee’s take on that question: “Nutritional labels are important and they can provide really good information regarding that thing you’re consuming right then and there. What they don’t do so well is remember the things you’ve already consumed.” Vessyl keeps daily totals of your liquid calorie intake, which reset every 24 hours, and suggests amounts you should drink to stay hydrated, factoring in the type of liquid you’ve been sipping. If you drank a lot of alcohol on Monday, for instance, the Vessyl would recommend higher levels of water on Tuesday, Berman says.

Do they expect people to put everything they drink into this, like asking bartenders to pour cocktails into it?

Lee says that they know people are less likely to use a Vessyl in a bar and that they designed something meant to work at home and at the office—where people spend most of their time. If you don’t have your Vessyl, you can still manually enter beverages into the app, which will add an estimated amount of nutrients to your daily total. “We’re realistic about the initial uses,” Lee says.

How many drinks has Vessyl programmed into the system?

Lee won’t give an exact amount but says they’ve worked through popular brands and are now looking for “outliers.” When TIME spoke to him in late July, the company had just added beet juice and a lemon ginger probiotic beverage. And they’re working on wine. Would Vessyl spend $1,000 on a certain bottle just to put it in the system? “Probably,” Lee says.

So what happens if a drink isn’t in the system?

Lee is unclear about what the Vessyl would do if you poured, say, motor oil into it. But for most potables, the container can analyze the nutrients (giving a total for calories, protein, etc.) even if the program doesn’t know the specific name of the beverage.

How much does it cost?

During pre-ordering season, Vessyls are going for $99. They’ll cost $199 once they actually start shipping in early 2015. Since going on sale in June, the company has had more than 10,000 pre-orders from 75 countries. The top cities for orders, respectively, are New York, San Francisco and London.

How much venture capital money has the company raised?

Right now, they’re not saying. Lee will only say they’ve raised a seed round with multiple investors.

Is this a first generation of the product?

Lee says probably. As more drinks are added to their system, the company can send out updates to products already out there—like Apple sends out software updates for iPhones. Future generations might identify contaminants, mixes of various liquids (like orange juice and mango juice) or be dishwasher safe (this version must be hand-washed). “We’re going to continue making it smarter and smarter,” Lee says.

How is it powered?

The cup comes with what they call a “saucer,” or charging station. A one-hour charge will on average last for five to seven days, assuming a person is drinking five to seven different liquids out of it each day.

Is Mark One working on other products?

Lee hints that the company may soon be trying to do the same thing for solid food. “The focus of the company is automatic nutrient tracking, tracking all the things we can consume so people can make healthier choices. Vessyl is our first product. But we do consume things outside of beverages,” he says. “There’s definitely more to come.”

Do you purely get information or does the cup make judgment calls, like ‘You should stop drinking so much coffee’?

This is a smart cup, not a bossy cup, Lee says. Users will be able to choose the amount of notifications they receive. The Vessyl is meant to provide insights, not “tsk, tsk” owners.

If it’s true that people need a gadget like this to make healthier decisions, is it sad that we’ve come to that point?

Berman says that experts have tried and tried to educate people out of unhealthy consumption and have come to the conclusion that education is just not enough. His take is that the information a product like Vessyl makes accessible is really fighting back against the barrage of companies who market food not for health benefits, but for profits.

What does the existence of the Vessyl say about where we are now?

“We want to be delighted in our everyday lives when it comes to everything that we use or touch,” Lee says. “What we’re seeing is evolution in objects.” 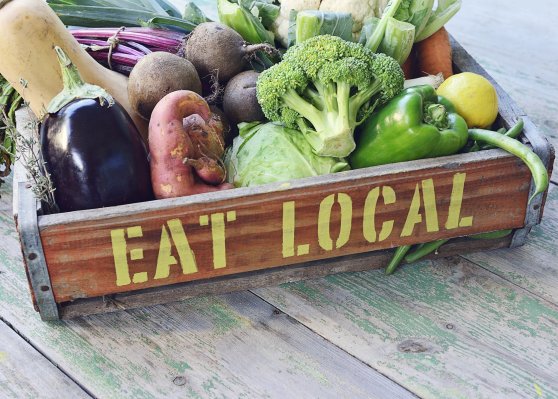 5 Most Confusing Health Halo Food Terms
Next Up: Editor's Pick