Monica Lewinsky arrives at The Masterpiece Marie Curie Party supported by Jaeger-LeCoultre and hosted by Heather Kerzner at The Royal Hospital on June 30, 2014 in London.
David M. Benett—Getty Images
By Charlotte Alter

Monica Lewinsky wrote another essay in Vanity Fair Thursday, and it was pretty much about everything except Bill Clinton. After her May bombshell in Vanity Fair about surviving the scandal, is this the second step in Lewinsky’s long road to internet redemption since the 1998 scandal.

If the essay is any indicator, that road may have a lot of twists and turns. She started off by discussing how she watches Orange Is the New Black, then stopped when she heard a nasty joke about her affair with the President. She goes on to discuss something she heard on NPR, then New Jersey teen who was body-shamed, then a Haruki Murakami short story about a monkey who is an identity thief. She was basically all over the place.

The piece was supposed to be about how to regain control of your public persona after your reputation has been smeared. And that’s pretty interesting from Lewinsky’s perspective. Here was a cogent moment:

The example she chose was Carleigh O’Connell, a 14-year old girl who posted a selfie in a bathing suit to get back at social media haters who were making fun of her butt and calling her fat. O’Connell took a stand against body-shaming and has now become an ambassador for a few body-postive organizations, so Lewinsky is using her as a symbol of an otherwise non-famous person who was publicly shamed, and then had to regain a public standing she never had in the first place. That’s a narrative that should sound familiar to Lewinsky, now 41, who was just a 22-year old intern didn’t have a public reputation to defend until the Clinton scandal launched her to global infamy.

MORE: The Shaming of Monica: Why We Owe Her an Apology

But then the essay takes a weird turn when she talks about Murakami’s freaky monkey character who steals identities. She’s trying to use it as a parable for the Internet, which she calls a “shadowy medium that exists outside the physical world—that has allowed us, as Carleigh’s story proves, to begin to have the means of reclamation.”

Lewinsky ends the essay with another coy reference to Carleigh and internet redemption, calling her butt selfie “an online rebuttal . . . in all meanings. Sounds good to me.”

So does this mean we can expect some Lewinsky butt selfies coming soon? Probably not, but it likely means we may be hearing a lot more from her as Hillary Clinton prepares for a (possible) presidential run. 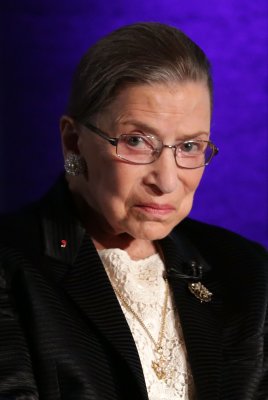