By Alex Altman and Elizabeth Dias

In the late afternoon of July 9, Air Force One touched down at Love Field in Dallas. President Barack Obama ducked into a private room at the airport for a discussion about the crisis of undocumented children crossing the southwest border. Assembled around a wooden table were top Texas officials, including Governor Rick Perry and Dallas Mayor Mike Rawlings, as well as the leaders of several faith-based charities. One of them was a man so anonymous, the White House pool report misspelled his name.

Kevin Dinnin is the CEO of a faith-based, nonprofit organization called BCFS, formerly known as Baptist Child and Family Services. This obscure charity has emerged as one of the biggest players in the federal government’s response to the influx of more than 57,000 unaccompanied children who have trudged across the southern border so far this year. It runs two of the largest facilities for temporarily housing immigrant children, as well as six permanent shelters in California and Texas. Since December, BCFS has received more than $280 million in federal grants to operate these shelters, according to government records. On July 7, two days before Dinnin met Obama in Dallas, the Department of Health and Human Services awarded BCFS $190,707,505 in a single grant.

BCFS is just one part of a sprawling system of shelters for unaccompanied children across the country. As the numbers of children entering the country balloon, so do the dollars required to care for them. To shield vulnerable kids from angry opponents of immigration and the media spotlight, the government declines to disclose the locations and activities of many of the facilities operated by BCFS and similar organizations. That protectiveness comes at a political cost. Governors in states across the U.S. have assailed the federal government for sending kids to their states without notifying local officials, and congressional critics say that massive amounts of taxpayer money are being spent without proper oversight.

A dormitory at Lackland Air Force Base in San Antonio where unaccompanied migrant girls are being housed.
Health and Human Services Administrations—The New York Times/Redux

Senator Charles Grassley, the ranking member on the Senate Judiciary Committee, wrote a letter to HHS Secretary Sylvia Mathews Burwell on July 17, requesting information about BCFS contracts to ensure that taxpayer money wasn’t being misused. “Despite being almost completely dependent on the public, BCFS has faced heavy criticism for attempting to avoid public scrutiny,” the Iowa Republican wrote. “This aversion to basic transparency is extremely disturbing.”

BCFS began in 1944 as a home for orphaned children. In recent years, a sleepy San Antonio–based charity grew into a global nonprofit with regional offices around the U.S., as well as in Southeast Asia, Eastern Europe and Africa. On contract for the federal government, it has provided temporary shelter and emergency services in the wake of natural disasters ranging from Texas hurricanes to Haitian earthquakes. When the state needed to relocate the members of a Texas polygamous sect in 2008, it turned to BCFS, which provided emergency housing. The current crisis is the largest and longest response BCFS has ever faced. It has deployed some 1,400 personnel to manage the temporary shelters this year.

For BCFS executives, the work can be lucrative. According to federal tax records, Dinnin received nearly $450,000 in compensation in 2012. At least four other top officials earned more than $200,000. The median salary for the CEOs of nonprofit organizations like BCFS was about $285,000 in 2011, according to a 2013 survey by Charity Navigator.

The salaries, BCFS spokeswoman Krista Piferrer says, are determined by factors in the group’s contract with HHS. When disaster situations strike, a crisis pay scale replaces a regular one to account for extended 12-hour shifts in two-to-three-week stints. In 2012, an influx of children at the border required an emergency response, according to Piferrer. “It is similar to making an appointment to see a primary-care physician vs. going to the emergency room,” she says. “The emergency room is more expensive.”

The federal grant money for sheltering unaccompanied children, provided by HHS’s Administration for Children and Families, has so far totaled $671 million during the 2014 fiscal year. BCFS has received 40% of those funds, making it the largest recipient of money disbursed to contractors to temporarily house unaccompanied children until they can be reunited with family members or placed in foster care. Dozens of other organizations are involved in the effort, including Southwest Key Programs, Lutheran Immigration and Refugee Service, and the U.S. Conference of Catholic Bishops.

BCFS is responsible for running two of the three temporary facilities recently set up to house large numbers of undocumented children apprehended by federal agents. One is at the Department of Defense’s Joint Base Lackland, in BCFS’s home city of San Antonio. Lackland is currently housing more than 700 children and has processed more than 3,600 overall since opening in May, says Kenneth Wolfe, an HHS spokesman. Another is Oklahoma’s Fort Sill, which is currently holding about 400 children and has discharged nearly 1,500 to date. Children stay at these facilities for an average of less than 35 days while the government works to find a family member with whom to place them. Because they are temporary shelters, some journalists, faith leaders, members of Congress and foreign dignitaries have been allowed into the facilities at Lackland and Fort Sill. Both facilities are expected to close by the end of August.

These facilities make up just a fraction of the extensive network in place to house child migrants. The Office of Refugee Resettlement’s Unaccompanied Alien Children program (UAC) has been given custody of more than 53,000 children over the past several months. The majority have been cycled through this network of about 100 smaller, permanent facilities, scattered across 14 U.S. states.

Unlike the temporary shelters, the permanent facilities are largely inaccessible to media and the taxpayers that fund them. Their locations are not officially disclosed, and they are “generally unnamed or unmarked,” according to Wolfe. Contractors are prohibited from speaking with the media without permission, BCFS says. As a result, it’s hard to gauge the conditions under which thousands of children are being held, or to assess whether taxpayer money is being well spent.

Wolfe, the HHS spokesman, says the secrecy stems from federal policy designed to protect the children’s privacy and ensure their safety. “We don’t identify the permanent facilities for the security of the children and the staff and the program,” he says. “Like any grant, we have federal staff assigned to oversight.”

A spokesperson for Southwest Key Programs, a Texas nonprofit that has been awarded more than $122 million in federal grants since December to shelter unaccompanied children, making it the second largest recipient after BCFS, said the organization was required to refer press inquiries to HHS. On a recent July afternoon, after multiple emails went unanswered, a TIME reporter drove to a Southwest Key facility in Phoenix. It was a colorful building ringed by tall metal bars and “No Trespassing” signs, situated off a freeway in a part of town where most signs are in Spanish. There was no guard out front to greet visitors, and entry required punching in a code at the locked gate.

The level of secrecy surrounding the facilities is unusual, says Neil Gordon, an investigator for the Washington-based Project on Government Oversight. But observers say it may be warranted. From Arizona to Michigan, clusters of citizens have held armed protests to oppose the relocation of undocumented children to facilities in their communities. “This situation is pretty unique in that they don’t want the mobs to come out and cause problems,” Gordon says. “That might be the reason they’re being so tight-lipped.”

A temporary shelter for unaccompanied minors who have entered the country illegally is seen at Lackland Air Force Base, in San Antonio on June 23, 2014.
Eric Gay—AP

A string of scams have also highlighted the importance of shielding the residents’ privacy. Grifters have been preying on the relatives of unaccompanied children, promising to help reunite them with their family members for fees ranging from $300 to $6,000, according to the Associated Press. The FBI is investigating the scams, which have targeted the families of children staying at BCFS facilities like Lackland, the AP reports.

Critics in Congress say the federal government is skirting transparency obligations. On July 1, Oklahoma Representative Jim Bridenstine, a Republican, was denied access to the BCFS facility at Fort Sill. “There is no excuse for denying a federal representative from Oklahoma access to a federal facility in Oklahoma where unaccompanied children are being held,” he said. “What are they trying to hide?” Soon after, the conservative media erupted over reports that BCFS planned to purchase a Texas hotel and turn it into a 600-bed facility for housing unaccompanied minors. (BCFS scuttled the idea, citing a backlash fed by inaccurate reporting.)

The UAC grant applications provide a glimpse of the extensive requirements to which organizations like BCFS must adhere. In addition to meeting all state and federal statutes, shelters must provide two hours per weekday of outdoor activity, offer classroom instruction on subjects like reading and science, supply counseling and personalized medical care, and grant phone calls to family members and access to visitors. The documents dictate that providers “utilize a positive, strength-based behavior-management approach, and shall never subject [residents] to corporal punishment, humiliation, mental abuse or punitive interference with the daily functions of living, such as eating or sleeping.”

Immigrant advocates say unaccompanied children are particularly vulnerable to abuse and exploitation. In January, the National Immigrant Justice Center issued a policy brief based on interviews with hundreds of unaccompanied children in the Chicago area. The minors reported grim conditions in the custody of the Department of Homeland Security, before transfer to shelters run by contractors. According to the policy paper, 56% said they had been placed in three-point shackles, which restrain individuals at the wrists, waist and ankles. More than 70% reported being placed in unheated cells during the winter. Some said they were barely fed.

The lack of public or congressional oversight of the facilities sheltering unaccompanied children should not be construed as concealing anything untoward, say groups that have visited them and worked with BCFS. The care at BCFS sites is extensive, Piferrer says, with the chief of the respiratory-disease branch at the Centers for Disease Control and Prevention embedded at the site to track every illness the children faced, from broken ankles to fevers to GI-tract infections. “You don’t find another organization like this,” Gary Ledbetter of the Southern Baptists of Texas Convention says of BCFS. “It’s basically a turnkey operation.”

“There’s not one bit of care that those kids were receiving that wasn’t first class,” says Chris Liebrum of the Baptist General Convention of Texas, a Baptist network with which BCFS is affiliated. “The federal government has come to Kevin. When the government says, ‘We need thousands of kids taken care of, can you do it?’ He’s done it.” 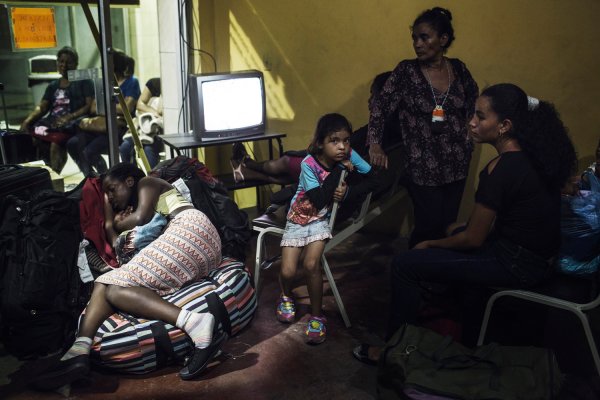