The House of Representatives rose to bid farewell to outgoing Majority Leader Eric Cantor Thursday, but if the GOP had hopes his passing might usher in a new era of comity between the party’s leadership and its right wing, they were short lived. Less than 3 hours after the symbolic farewell (he’ll officially resign on August 18), the GOP House leaders, lacking the votes they needed for passage, pulled a much-touted bill that was meant to address the ongoing crisis of unaccompanied minors streaming across the country’s southwest border by the thousands.

It seems the new Republican House leadership will have no better luck delivering unity than the last one.

Over the past two weeks, conservatives pushed House Speaker John Boehner, Majority Leader Kevin McCarthy and Majority Whip Steve Scalise to move the border bill to the right. The leadership’s proposal, originally set to cost around $1.5 billion last week, shrank to $659 million by Tuesday in response to conservative spending complaints. On Wednesday night, leadership further sweetened the deal by offering conservatives a separate, largely symbolic vote aimed at blocking an expected move by President Barack Obama to expand deportation relief to undocumented immigrants in the U.S.

But the efforts to win the right wing irked some moderate Republicans, including Rep. Mario Diaz-Balart (R-Fla.), who worked on the House GOP committee tasked with creating the border bill’s guidelines. “If you start adding a number of different issues to this bill, it’s just going to weigh down and kill it,” he told TIME Wednesday.

Senate Majority Leader Harry Reid did his best to make the GOP leadership’s job harder, suggesting that the chambers could discuss merging the House border bill with the Senate’s immigration reform bill from last year, which would create a pathway to citizenship for some of the 11.7 million illegal immigrants. House Speaker John Boehner called it a “nutso scheme” Thursday and added that the House would not take up the Senate bill “in any fashion, including in this border bill.”

When asked if he thought the border crisis was an example of how the House and Senate are not making the requisite hard choices to govern, Speaker John Boehner tried to shift blame to the White House. “The crisis on the border is going to continue until the President acts—and he’s surely not going to act—that means that Congress has to act,” said Boehner. “And so, I believe it’s important for us to act. And I hope that we’ll do that.”

GOP rank and file members were somewhat sheepish about the predicament they had put their leaders in. “They didn’t have the votes,” said Rep. Jim Jordan (R-Ohio) on why the House leadership didn’t bring the bill to the floor. Jordan, who was leaning “yea” on the bill, praised Scalise’s effort to attract enough votes for passage. “I thought he worked hard,” said Jordan. “I mean jeepers, I was in three meetings for fifteen hours last week…He was reaching out to all kinds of folks.”

Others just wanted to get out of town for the imminent five week summer recess. “It’s complicated,” said Rep. Thomas Massie (R-Ky.), a conservative who opposed the bill said by way of explanation for his opposition. “I’m going to try and catch my plane,” he added.

After the bill’s failure, the GOP leadership released a statement saying the intended to “continue to work on solutions to the border crisis and other challenges facing the country.” 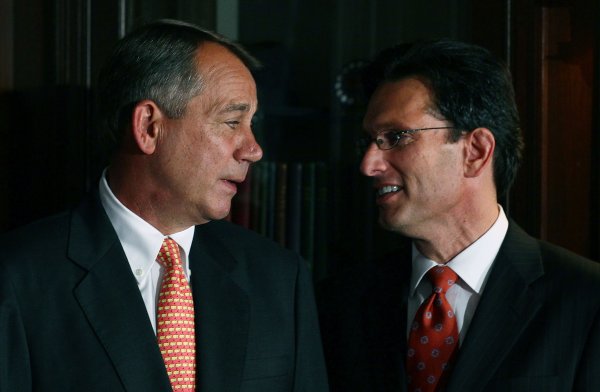 Eric Cantor and John Boehner: The Bromance Is Over
Next Up: Editor's Pick