NFL Star Ray Rice on Assault: 'My Actions Were Inexcusable'

Running back Ray Rice of the Baltimore Ravens addresses a news conference at the Ravens training center on May 23, 2014 in Owings Mills, Maryland.
Rob Carr—Getty Images
By Eliana Dockterman

Baltimore Ravens running back Ray Rice publicly apologized a second time to his wife after being arrested for allegedly assaulting her. The National Football League suspended Rice for two games this season following the arrest.

“My actions were inexcusable. My actions are something I have to live with for the rest of my life,” he said.

A grand jury indicted Rice in March for third-degree assault after TMZ posted a video of him dragging his unconscious then-fiancée out of an elevator at an Atlantic City hotel. Rice allegedly hit the woman so hard that she fell unconscious. Rice settled the charges by entering a pretrial program, which means he will pay a fine but serve no jail time. Rice’s record will be wiped clean in one year.

In May, Rice and his wife (the two have since married) held a press conference in which she apologized but he did not. The pair drew criticism for perpetuating victim-blaming.

“I didn’t publicly apologize to my wife. I know that hit home for a lot of people,” Rice said during Thursday’s conference. “I’ve made the biggest mistake of my life. Me. She can do no wrong. She’s an angel.”

The NFL has come under fire for only suspending Rice for two games while it has suspended players who smoked marijuana for an entire season. Top sports analysts like Keith Olbermann have spoken out against NFL commissioner Roger Goodell for being too lenient on Rice and not taking the issue of domestic violence seriously. 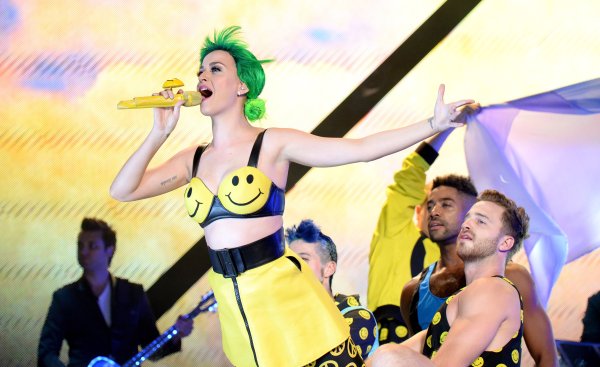 Watch Katy Perry Do What She Does Best In 'This Is How We Do' Video
Next Up: Editor's Pick