Staff of the Christian charity Samaritan's Purse putting on protective gear in the ELWA Hospital in Monrovia, Liberia, on July 24, 2014
Zoom Dosso—AFP/Getty Images
By Alexandra Sifferlin

The Centers for Disease Control and Prevention (CDC) has issued a travel advisory for Guinea, Sierra Leone and Liberia in response to an Ebola outbreak ravaging those West African countries, CDC director Dr. Tom Frieden announced in a press conference Thursday.

The CDC’s warning recommends against nonessential travel to the three countries. Frieden also said the CDC is sending an additional 50 disease-control specialists into the three countries over the next 30 days in order to establish emergency operation centers in collaboration with the World Health Organization. The centers will provide resources and fast diagnoses, according to Frieden. The CDC already has workers tracking the epidemic and its spread.

“The bottom line is Ebola is worsening in West Africa,” said Frieden. “CDC, along with others, are surging to begin to turn the tide. It is not going to be quick. It is not going to be easy. But we know what to do. The current outbreak is bad. It’s the biggest, the most complex, and the first time it’s been present in this region.”

Frieden said the shared border of Guinea, Sierra Leone and Liberia appears to be the epicenter of the outbreak. One of the greatest problems facing containment efforts, he said, is that the three countries’ health care systems are not highly functional. Some residents of the worst-hit countries also lack an understanding of the disease, and many have developed a hostility toward health workers over fears they are spreading the very disease they are working to prevent.

So far, the Ebola outbreak has been isolated to West Africa. It recently spread into Nigeria, when a traveler from Liberia was recently diagnosed with the virus. Sierra Leone, meanwhile, has declared a public-health emergency over the outbreak.

Despite the CDC’s travel warnings, Frieden said Ebola, which he called “frankly a dreadful and merciless virus,” poses little risk to the American population. Even if the U.S. were to have a confirmed case, the director says it is highly unlikely the disease would spread significantly — every hospital with an intensive-care unit can isolate a patient, he said. Ebola transmission, meanwhile, only happens via direct contact with infected bodily fluids.

“In past outbreaks, we’ve been able to stop every outbreak, but it takes meticulous work,” said Frieden. “It’s like fighting a forest fire. If you leave behind even one burning ember, one case undetected, it could reignite the epidemic. But as difficult as it is, it can be done.”

Currently, the CDC is not screening travelers from the affected countries.

For the basics on the disease, check out the infographic below. 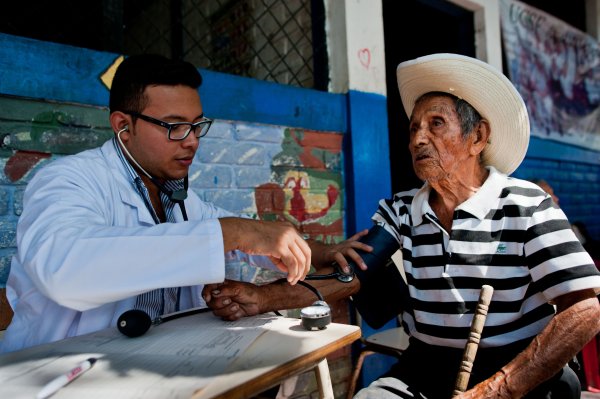