Focusing on campaign finance reform could be a winning strategy for candidates in Senate battleground states, according to a new poll out Thursday from the Democratic polling firm Democracy Corps.

According to the survey, a majority of likely voters among Democrats (75%), Independents (64%) and Republicans (54%) see the wave of spending by Super PACs this election cycle as “wrong and leads to our elected officials representing the views of wealthy donors.” So far in the 2014 election cycle, Super PACs, which can raise unlimited sums from donors, have spent $87.5 million and counting to influence election outcomes. Though Republicans view Super PACs significantly more favorably than do Democrats, both sides benefit from the influx of cash to the tune of $43.4 million for conservatives and $41.9 million for liberals, according to the Center for Responsive Politics.

Poll respondents were likely voters in 12 states with hotly contested Senate races selected from among people who voted in earlier off-year elections in 2006 and 2010.

The poll suggests that supporting a constitutional amendment to reverse recent Supreme Court rulings like Citizens United that eliminated some limits and transparency requirements on campaign donations could be an effective campaign tack in 2014. Overall, 37% of respondents said they were more likely to vote for a candidate who supported such an amendment, including 43% of Independents. Likely voters in all 12 states overwhelmingly support a constitutional amendment to overturn Citizens United, 73% to 24%, according to the poll.

The survey results bode well for groups that have vowed to make big money in politics a central issue in the 2014 elections, including Kentucky spoof candidate Gil Fulbright and the Mayday Super PAC, which has raised nearly $8 million to spend backing pro-reform candidates in five key races around the country. 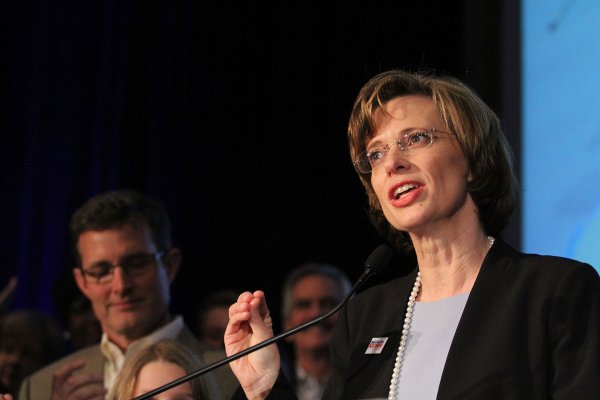