The Psychological Toll of Ebola in Sierra Leone

A nurse from Liberia sprays preventives to disinfect the waiting area for visitors at the ELWA Hospital where a US doctor Kent Bradley is being quarantined in the hospitals isolation unit having contracted the Ebola virus, Monrovia, Liberia, 28 July 2014.
Ahmed Jallanzo—EPA
By Mirren Gidda

In West Africa, the deadly Ebola outbreak is worsening daily. The U.N. announced Thursday that 1,323 people have been infected in Guinea, Liberia, Nigeria and Sierra Leone. Of those afflicted, 729 have died.

The tiny country of Sierra Leone has been hit hardest, with 533 reported cases. The President of Sierra Leone, Ernest Bai Koroma,
has announced a public health emergency, some schools and banks have closed, and doctors are scrambling to treat people for a virus they can’t cure—or contain. As patients worsen, their bodies—and their minds—take a toll.

Amid that chaos and fear was Ane Bjoru Fjeldsaeter, a psychologist who was working at a Doctors Without Borders’ treatment center in Kailahun until recently, when she returned home to Norway. The only mental health professional in the 64-bed center, she was tasked with providing emotional support and counseling to victims, their families and those treating them.

“The fear is widespread,” she says. “When we first started working in the region there was a lot of denial. It’s a common psychological response when faced with a horrible situation.”

For those inside the treatment center, the grim reality of Ebola was impossible to ignore. “They see people around them with a rapidly progressing and ugly disease,” Fjeldsaeter says. “It’s a scary situation to be in.”

Doctors Without Borders has been operating in Kailahun since June 25 and the mortality rate within the center has dropped from 90% to 60%, according to Fjeldsaeter. She counseled patients at a distance of 1.5 meters, separated by two orange fences that came up to waist height. “If someone is so sick they can’t come to the fence, I’ll wear protective equipment and go to the isolation ward,” she says.

“Most of the patients were more concerned about their relatives than their own lives,” she explains. For others, the isolation can be extremely trying, and as their health worsens and their own mortality looms, many turn to God. “Sometimes they asked me to pray with them or for them,” she says.

In such an emotionally charged environment, staff are often affected. “It’s a workplace where it’s common at times to become overwhelmed with emotion,” Fjeldsaeter says. “Staff told me they didn’t feel professional. I had to tell them, ‘Nobody’s made of stone, we’re all affected by this. It’s a national tragedy and it’s okay to cry.'”

She also offered some group counseling for staff. “They have shared concerns. There’s a fear of contamination and the feeling of helplessness because there’s no cure. They’re up against the disease and they don’t know what to do. There’s clear sadness.”

Despite the horrors that she witnessed during her month in Sierra Leone, Fjeldsaeter remains stoic. She admits to being scared but adds: “If you’re not scared then you’re not careful. You have to embrace your fear a bit, but you can’t let it paralyze you.” 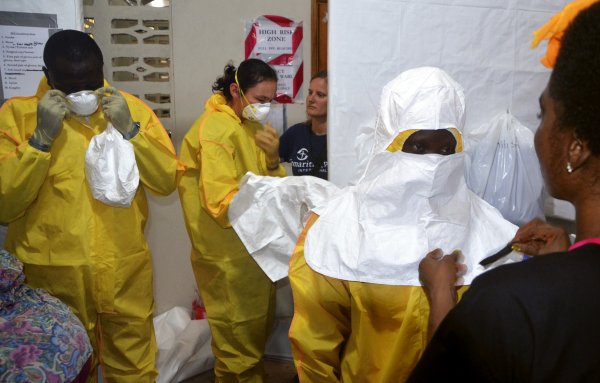 CDC Issues Travel Warning in Face of Ebola Outbreak
Next Up: Editor's Pick