Women and children wait at a bus terminal in San Pedro Sula to begin their journey to the U.S. border
Ross McDonnell for TIME
By Ioan Grillo

A Chubby 17-year-old in a polo shirt and baggy pants is Barack Obama’s latest problem. His name is Antonio, and he lives 1,725 miles (2,775 km) from the White House in one of the world’s most murderous cities. Since April, five of his friends have been gunned down–three killed together by gangs as they rode in a car, two shot dead on a street corner. Antonio took a bullet in the calf last year, leaving him with a limp and a scar. Now he says he has two options: get his own gun or flee Honduras and get to the U.S., where he has an uncle living in Louisiana.

“God has helped me survive until now. But I need to get out of here,” he explained while keeping his head low in the back of a car, after asking that his surname not be used for fear that local gangs would target him for talking to a journalist. “I dream about being able to walk down the street without looking over my shoulder thinking someone is about to kill me.”

Antonio’s fear radiates in all directions. His neighborhood here in San Pedro Sula is controlled by the Mara Salvatrucha, a heavily armed gang thousands strong that spans Central America. He grew up with some of its members and has helped watch the street for them. But he doesn’t want to join–a process he says involves carrying out an initiation murder. In other neighborhoods, rival gang Barrio 18 is the threat, ready to gun down anyone with ties to the Mara. Antonio is even wary of police and soldiers, who he says can be nervous and trigger-happy as they patrol. “You have to watch everybody,” he says. “You need eyes all over the place to survive here.”

He is not the only one looking for a way out. More than 43,000 unaccompanied minors from Honduras, Guatemala and El Salvador have crossed into the U.S. since October, a flood 10 times as large as in 2011. Some go to be reunited with parents. Some go for jobs or because they incorrectly believe that Obama has promised amnesty to those who make it over the border. But one of the biggest reasons, according to surveys by the U.N. and others, is fear of the criminal gangs that shape lives back home.

That brutal fact has transformed the violence of Honduras into an unexpected–and confounding–domestic and foreign policy challenge for the U.S. In a rush to find places for the children to live, communities from Oracle, Ariz., to Syracuse, N.Y., have split over whether to accept new facilities for unaccompanied migrants, even as school districts mobilize to find spots for the children before the start of the coming school year. The tense and acrimonious politics of immigration in Washington, meanwhile, has become even more deeply scrambled by the crises, with Democrats divided over what to do and Republicans in a newfound position of power. So far, congressional leaders in the House have rejected Obama’s request for $3.7 billion in emergency funding, including about $300 million in new foreign aid to Central America. “We all recognize that we have to do more to address the root causes of the problem, and that includes poverty and violence in Central America,” Obama said on July 25 after meeting with the leaders of all three countries at the White House. “We have a shared responsibility.”

In Chamelecón, one of the most violent suburbs of San Pedro Sula, police have four patrol cars for an area with about 170,000 people. They keep a map of the city with rival gang territories indicated by color, and they trace the gangs’ weekly territorial gains in pencil. In the contested zone between the Mara Salvatrucha and Barrio 18, houses lie abandoned, with old clothes, photos or food packages left by residents before they fled. The gangs chased the people away, police explain, to create a buffer zone so enemy gunmen can be caught before they infiltrate.

Miriam Hernandez and her 4-year-old grandson were among those who left their home for a nearby suburb. “They would have killed us if we hadn’t gone,” she said. “They were not just teenagers but also older guys with pistols and rifles.” At another home, an older woman refused to move. The gangsters shot her dead two months ago, police said. She had two teenage grandchildren living with her; the officers were not sure where they have gone.

For years, the gangs made their money through what the Mara and Barrio 18 call the impuesto de guerra, or war tax. Not only do taxi drivers, bus companies and small shops have to pay it, but larger firms and independent professionals also complain of being shaken down. The judicial system cannot handle the menace. “It is very hard to fight this extortion,” says Captain Cesar Jhonson, a spokesman for the Honduran National Police. “We need citizens to come forward and testify against the gangs, but we understand they are scared for their lives.”

In recent years, shifts in the cocaine trade have made life here even worse as Latin American cartels found new local partners in Honduras after crackdowns in Mexico and Colombia. In 2009, Julian Aristides González, then Honduras’ antidrug czar, told TIME that the new alliances would lead to major violence. Five days after the interview, assassins on a motorcycle killed him with 11 bullets. Since then, his prediction has been realized. The murder rate in Honduras, a country of about 8.6 million people, shot up to 7,172 in 2012, the highest in the world outside a declared war zone–a ranking it still holds. In recent years, authorities report that the gangs have increased their targeting of regular civilians, forcing children to choose between safety and joining the gangs and even trying to impose taxes on families that receive money from relatives overseas. Organized-crime groups started marketing their services to ferry children and families to the U.S., promising that Obama was handing out legal papers in El Norte.

For the Honduran government, the violence, extortion and false promises of safety have led to a desperate call for international help. “In the United States, many officials see the drug problem as basically one of health, as how much it costs to treat an addict and stop them getting involved. But for us it is life and death,” Honduran President Juan Orlando Hernández told Time during an interview in the grandiose presidential palace in the heart of the sprawling, chaotic capital, Tegucigalpa. “Never in Central America, particularly in the Northern Triangle and in Honduras, has there been so much loss of life as in this decade. Never. Never in history. And look, disgracefully, this is not an issue that originates in Honduras.”

Hernández calls for a joint security effort akin to Plan Colombia, a campaign launched in the late 1990s that helped the Andean nation fight drug traffickers and cocaine-funded guerrillas. Money could be used to bolster security forces so they could take back Honduran neighborhoods from gangs like the Mara and cartels, he says. Hernández also wants cash funneled into social programs to give young people better options than signing up with the gangs. He points to Ciudad Juárez, Mexico, which was even more violent than San Pedro Sula in 2010: murder rates there have since plummeted, thanks to social investment and other factors.

White House officials say change will take years and will require far more than external funding. Countries like Colombia and Chile are also sending aid, and the E.U. has been inching toward increased economic assistance. “You can’t import a solution,” says one Obama Administration official working on the funding request. “You can provide technical assistance, but it has to come from inside.”

In the U.S., The Obama Administration has been working on two rule changes that it hopes will dissuade Central Americans from heading north, even if the violence does not immediately abate. The first would allow Hondurans to apply for refugee status from their home country, a measure meant to dissuade people from making the trip in a gamble for residency. The second–and far more controversial–change would alter a 2008 law that requires that unaccompanied minors from Central America be placed “in the least restrictive setting” available for the child, which often means with relatives or in foster care.

This allows the youths to attend school and live their lives before deportation proceedings begin, a process that can take years. The result, say officials, is that many young people find themselves living better–if temporary or undocumented–lives in the U.S. than they had at home, even if they don’t qualify for refugee status. U.S. officials worry that this has created an incentive for more children to travel north, as they hear from friends and relatives who have found new living arrangements.

But most Democrats in Congress have so far bucked the President’s efforts to make deportation more immediate, with everyone from Nancy Pelosi to Hillary Clinton saying the President has it wrong. They worry that some minors may not be properly screened at the border and will be sent back to dangerous situations. The consequences could be fatal. “If that happens, some of these children will be murdered. It is not a question of if. It is a question of when,” says Elizabeth Kennedy, a Fulbright fellow who has studied the Central American youth fleeing north for the past year.

If there is any good news, it is that the flood of children has slowed since June, with about half as many showing up in July. But that still means the tide is near historic highs. All the persuasive power of the U.S. pales next to the lure of safety and the promise of prosperity. In the Honduran town of Choloma, a 30-year-old smuggler with a tattoo on each eyelid described his job taking groups of migrants for the past two years, after a five-year stretch at La Mesa Prison in Texas for selling drugs. He works for an organization that charges $6,500 for each migrant, he says. However, as an employee, he makes only about $750 for each trip. His organization pays $1,500 per migrant to the drug-trafficking Gulf Cartel to ensure safe passage through their territory in northeastern Mexico and over the Rio Grande into Texas. If migrants get turned back on the first trip, he says, they get a second chance without paying more.

Asked about the increase in child migrants, the smuggler says with conviction, though much less accuracy, “They are giving out permits in the United States.”

That’s false, but the pitch still draws children like Antonio north, despite a new round of television advertising paid for by the U.S. State Department that warns Hondurans not to believe the smugglers. It is a temptation that is hard to resist. As Antonio puts it, still ducking to avoid the gaze of gangsters, “I love my country, but what future do I have here?” 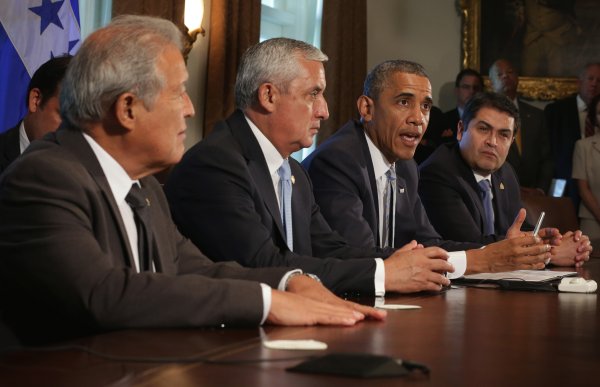