Your new series, The Honorable Woman, is centered on the Israeli-Palestinian conflict. Do you take a side?

What I’ve been doing is trying to read as much as I can and to think and feel each day what my position is. I’m not sure that I will continue to feel this way as this conflict continues, but at the moment I feel like the show I made, the piece of art I made, does articulate really beautifully so many things I feel about the conflict. And I’m trying to keep my personal politics out of the press. I do believe in the possibility of reconciliation.

You don’t worry that, as Desmond Tutu says, the neutral have chosen the side of the oppressor?

I’m not saying I don’t take a position. I’m saying that I don’t think my politics will serve what I’ve made right now. I used to think when I was younger it was my responsibility to stand up and yell out what I thought.

You did that about the Iraq War, for example.

I’ve done that about a lot of things. But in this case, if I want to open someone’s thinking process even the tiniest bit, I don’t think it does any good for me to stand up and yell. I did try to create a character in Nessa who can speak to both sides.

Nessa, a prominent CEO, sleeps in a crazily secure panic room. You’re a celebrity. Do you relate to that kind of fear?

I relate to panic sometimes. One of the things that’s happening to Nessa is that she’s going from being somebody who performs all the time and feels that she has to be extraordinary to somebody who is actually a human being.

Are you saying that’s related to the performative aspects of being an actor?

Maybe it’s an occupational hazard of being an actor more, but I think it’s something all human beings can relate to–performing themselves, thinking they’re supposed to be what they imagined they were going to be when they were 20. Look, I’m 36. That performance is just not working anymore. The humanity, the places where we’re terrified or weak or flawed or wrong–and Nessa has all of that, and so do I–that’s where you’re in the game.

You’ve said President Obama has broken your heart. How?

I really believed in him, and I’m not sure what he believes in anymore.

Was there one event that pushed you over the edge?

The way he’s handled the NSA stuff. Look, I get it, I know. It’s a complicated job. I could never do it. But I hope for a leader who will stand up and be unpopular.

Your mother’s movie Very Good Girls just came out. Is it her first directing job?

It is. And I think she might be the first woman to direct her debut film as a grandmother.

Why do you think actresses younger than you decline to call themselves feminists?

I don’t understand why you wouldn’t call yourself a feminist. But I sometimes take issue with the kind of old-school feminism that cuts out the complicated gray areas. I believe every woman has the right to have an abortion. But sometimes the style in which that message is put out there, I have a hard time with.

Sometimes. The ways in which I feel there’s an inequality are subtler. For example, if I don’t agree with something that a director suggests on a job, or if I have my own ideas, I feel like I’m considered difficult as opposed to an exciting collaborator.

Most of your movie choices have been political. I’m curious about White House Down.

White House Down is surprisingly political. But it’s not why I did it. It’s a good time.

Was it just because you got to look at Channing Tatum?

I didn’t just get to look at him! I do all sorts of things with him. But I wouldn’t have made it if it was saying things politically that I thought were wrong. I hope that’s clear. 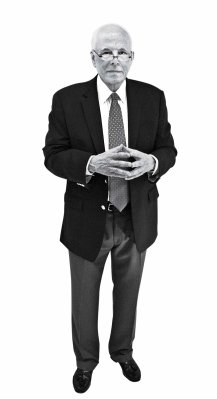 10 Questions With John Dean
Next Up: Editor's Pick